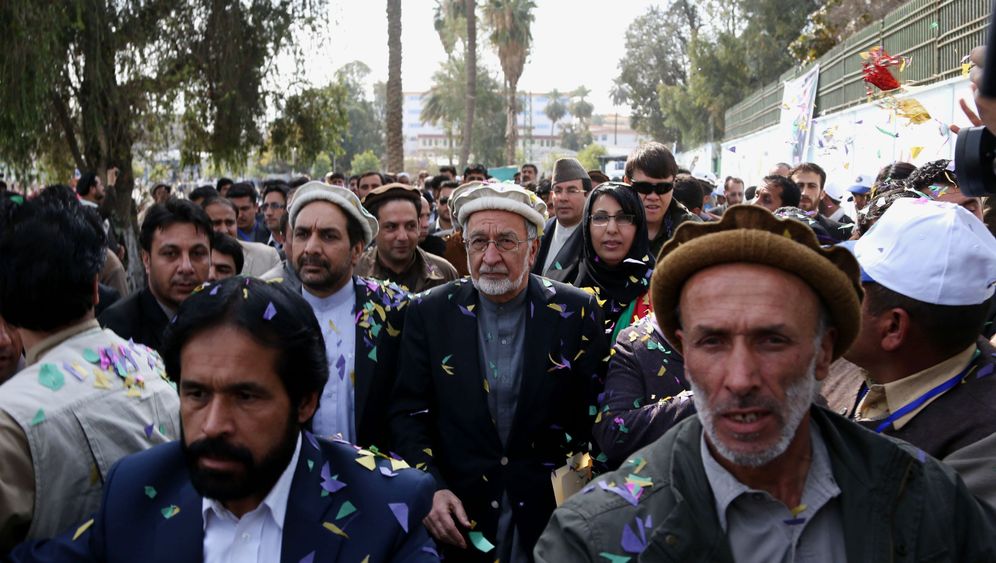 The small helicopter descends onto the football pitch of Nangarhar University in Jalalabad and a gray-bearded man wearing a Merino wool jacket emerges from the bright cloud of dust. Zalmai Rassoul approaches the group waiting to receive him, men wearing pakols -- the brown, woolen caps of the mujahedeen -- with shawls elegantly draped across their shoulders. They hurriedly ushered Rassoul into a white, armored SUV and the motorcade quickly departed.

It is campaign season in Afghanistan, with the presidential vote slated for April 5, and this day on the stump begins for Rassoul at the grave of Amanullah Khan in Jalalabad, the provincial capital not far from the Pakistani border. Afghans revere the former king for liberating them from the British -- and he was candidate Zalmai Rassoul's uncle. Here, on the eastern edge of Afghanistan, where the winters are mild and the orange trees fertile, Amanullah Khan has found his final resting place.

Amanullah was a radical reformer. He was the first Afghan head of state to try to model his country after Western industrial societies. But he failed. He tried to do too much too quickly, resulting in widespread opposition to his plans. Amanullah was toppled in 1929, was forced to flee and died in Swiss exile 31 years later.

Now that the former king's nephew is seeking the presidency, is Afghanistan ready for the sleeveless blouses and hair free of headscarves that Amanullah's beautiful Queen Soraya preferred? Or is it at least prepared for Rassoul's vision of an advanced Afghanistan? That was the focus of the speech he planned to deliver in the stadium of Jalalabad.

Zalmai Rassoul is one of three top candidates to succeed Hamid Karzai. The other two are the Pashtun Ashraf Ghani, a technocrat educated in the US who previously served at the World Bank, and Abdullah Abdullah, the leading opposition candidate. His father is likewise Pashtun, but Abdullah Abdullah primarily represents the majority Tajik powers of the former Northern Alliance, the group which joined the Americans in toppling the Taliban government in 2001.

The possible outcome of the race is difficult to predict, though it is expected that the first vote will result in a run-off between Abdullah Abdullah and one of the other candidates. In the second round, either Ghani or Rassoul will likely emerge victorious. But with just days to go before the first round of voting, a possible coalition between Rassoul and Abdullah is in the works. It also, of course, can't be excluded that local politicians, as they did five years ago, will stuff the ballot boxes.

The Taliban, too, will influence the election in their own way. In southern Afghanistan, they have threatened to attack those attempting to cast their ballots and Taliban militants even stormed an election commission office in Kabul on Tuesday, killing at least six. Eleven other people were killed in two different suicide attacks on the same day, underscoring the widespread violence that has swelled as the vote approaches. Last Thursday, a Taliban attack on a Jalalabad police station left 18 people dead. The bloodshed has once again raised the question as to how Afghanistan can ever move toward prosperity and attract outside investment in the absence of at least a modicum of security.

Incumbent Karzai is not running again, prohibited by the constitution of serving a third straight term. And as the end of his presidency rapidly approaches, the 56-year-old has become embittered, frustrated and angry. He feels betrayed by the Americans, with the primary disputes being terrorism the unresolved conflict with Afghanistan's neighbor Pakistan. The Taliban have long sought refuge across the border following attacks and continue to do so today.

The Americans, Karzai complains, have failed to exert sufficient pressure on the Pakistani government in Islamabad and only fight terrorists in his own country, and not on the other side of the border. That is also one reason why he has refused to sign the agreement allowing for US troops to continue being stationed in Afghanistan beyond the end of this year, the so-called bilateral security agreement.

Karzai's favorite in the campaign is his former foreign minister, Zalmai Rassoul, even though the outgoing president's two older brothers, Qayum, 57, and Mahmoud, 58, both see themselves as worthy successors. Mahmoud emphasizes the economic opportunities available in Afghanistan. "A businessman like me would be a good choice," he says during an interview at his house -- invisible behind high security walls -- in the Sherpur district of Kabul. A glass bowl in front of him is overflowing with fruits and sweets to offer to the myriad guests he receives daily. "In the final analysis, isn't it about the economy, about money?"

For years, though, Mahmoud has been criticized over his opaque business dealings, with perhaps the most bizarre incident being his involvement with the scandal-plagued Kabul Bank. The private financial institution was plundered by its own management. Hundreds of millions of dollars is said to have been embezzled -- much of it hidden in airline service trollies and flown out of the country.

The relationship between President Karzai and Mahmoud is considered tense, though Hamid has consistently allowed his brother to move on. Karzai confidants say that the president considers the corruption allegations against his family to be politically motivated, a kind of psychological warfare waged by the Americans. He believes that US officials feed information to the media in an attempt to damage him.

'It Was All Ugly'

The suspicion isn't totally absurd. Washington has, to be sure, invented intrigue against Karzai in the past. Former Secretary of Defense Robert Gates describes in his memoirs a "clumsy and failed putsch" attempt in 2009 in an effort to get rid of Karzai. The result, according to Gates: "It was all ugly: our partner, the president of Afghanistan, was tainted, and our hands were dirty as well."

Not long after his recent visit to his uncle's grave, candidate Rassoul was to be found at the breakfast table of a prosperous parliamentarian in Jalalabad drinking milk tea and gnawing on a chicken leg. More and more supporters came into the room to offer their greetings to the man who could soon become Afghanistan's head of state.

Rassoul is not used to so much attention, and he isn't comfortable with it either. It was only 8 a.m. and he had again only managed to get a mere three hours of sleep. He had arisen early for a strategy meeting with his campaign manager before boarding a rather turbulent flight from the capital -- directly over the region in which al-Qaida founder Osama bin Laden once operated his terrorist training camps.

The last 12 years have resulted in Rassoul, who in addition to being Karzai's foreign minister also served as his security advisor, being almost completely overshadowed by the president. Constantly sitting next to Karzai during meetings with state guests from abroad, secret service heads or Taliban representatives, it almost seemed as though he had become a part of the palace furnishings. He would almost always remain silent. But today, there isn't anyone in the country who knows as much about Afghanistan's complicated power structures, its trade relations and the alliances Hamid has constructed over the last decade as Rassoul does.

But the polite reserve he displayed while serving Karzai has become his biggest handicap in the current campaign. He isn't one for fiery speeches, instead preferring to flatly announce what he would do differently and pledging that he would immediately sign the bilateral security agreement with the US. He says he wants to "root out corruption" and elevate young people into positions of responsibility instead of allowing old-timers to continue to block their path.

Despite the many setbacks, after all, Afghanistan is not completely cut off from the modern world. Some 18 million of the country's population of 30 million have mobile phones and there are 24 Afghan television channels broadcasting political debates, cooking shows and Bollywood dramas. There are 25 state universities and 40 other private schools. "That is the Afghanistan's new generation, people of the 21st century," Rassoul says.

There are ATMs and shopping malls in Kabul; at least five flights a day depart for Dubai. Twenty-year-old men wear slim-cut, black suits and Western hairstyles. More freedom, more self-confidence, a better life: That too is part of Afghanistan 12 years after the terror attacks of Sept. 11, 2001.

But won't Rassoul, if he wins the election, be but a puppet of Hamid Karzai's, as many who know them both contend? After stepping down, Karzai intends to move into a newly renovated house on the grounds of the presidential palace -- in the immediate vicinity of his predecessor. Rassoul, though, denies such imputations: "Nobody can influence me or change my vision for Afghanistan," he insists.

As politicians, Rassoul and Karzai could hardly be more different, and much would likely change should the long-serving presidential confidant indeed be chosen to move into the presidential palace. For years, the extroverted Karzai has received delegations from the provinces on an almost daily basis, kissing dusty beards, listening to their stories of privation and fulfilling their wishes. Establishing and maintaining contacts -- even with the enemy -- is Karzai's greatest political talent.

Indeed, that is how Karzai -- long derided as being merely the "mayor of Kabul" -- slowly expanded his power across regional, ethnic and political boundaries. Today, Karzai can call almost every influential politician in this difficult country and ask for support. He has become a master of the political deal.

Why, then, did Karzai force his own brother Qayum to abandon his candidacy for the presidency? Qayum had registered as a candidate, and worked with his brother Mahmoud as his campaign manager. But during a meeting of tribal elders, the president made it clear that he would be supporting Rassoul instead of his own brothers. Begrudgingly, they joined Rassoul's campaign, ensuring that the Karzai family will continue to have influence, but only from the second tier.

Challenger Abdullah Abdullah suspects that the maneuver is part of the president's grand plan. In the history of Afghanistan, brothers have often murdered brothers, sons have killed their fathers and fathers have eliminated their sons, Abdullah says. "Karzai doesn't trust Mahmoud and Qayum and believes it will be easier to control Zalmai Rassoul." But whoever governs in the future, will have to reckon with the ongoing influence of Karzai.

The stadium of Nangarhar is immediately behind the governor's residence. The freshly renovated building is painted a friendly yellow, punctuated by blue sun umbrellas and surrounded by a garden; even the turquoise swimming pool has been redone. It was once the royal family's winter residence.

Thousands of people have gathered on the grass of the sports facility, most of them are young. Many of them are participating in their first ever campaign event. When the candidates appear, they grab for their mobile phones, hoping to take a picture of Rassoul and Habiba Sarabi, who Rassoul introduces as his vice presidential candidate. Currently, she is the only woman in this campaign of nine presidential candidates with a chance of winning. But Zia Massud, the brother of the late Northern Alliance commander Ahmed Shah Massud, is greeted with the most frenetic applause. Ahmed Shah Massud fought the Taliban for years before al-Qaida militants assassinated him two days before Sept. 11, 2001.

Then, the national anthem is played. Rassoul is now wearing a huge turban, a sign of recognition for his leadership. Everyone stands; the event feels celebratory. The police seem to have the security for the event under control; not a single soldier from the international protection force is to be seen. Finally, young Islamic Republic of Afghanistan has indeed transformed into a state. It is instable, fragile and corrupt, but it is no longer quite so easy to knock over.