The bullet pierces the chest on the left side, just below the heart. "Look what I've done with Medvedev," Vladimir Zhirinovsky crows once the deafening echo of the gunshot has died down. Zhirinovsky didn't have any trouble holding up the black, large-caliber Benelli rifle when he pulled its trigger; it weighs all of three kilograms. Zhirinovsky then has a look at the damage he's done. Luckily, his targets were nothing but cardboard-cutout comrades. 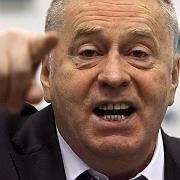 Russian hardliner and political tool Vladimir Zhirinovsky -- the joke's increasingly on him.

It is a presidential election campaign entirely to the liking of the chairman of the nationalist Liberal Democratic Party (LDPR). At a shooting range near Moscow, Zhirinovsky, wearing camouflage and hiking boots, adopts a warlike pose. And while he doesn't pose a danger, anyone who sees him believes he's at war. As always, Zhirinovsky is loudly and devotedly banging away at ghosts.

The "Agitator" and the KGB

Confident of victory, he delivers a bawdy joke: "After the election, Medvedev says to his wife: Darling, today you will be sleeping with the president. She replies: When is Zhirinovsky coming?" But the far-right candidate's bawdy jokes cannot conceal the fact that he has set his sights on completely different adversaries than the heirs to the Kremlin. Every evening the 61-year-old Zhirinovsky scuffles with Gennady Zyuganov, the leader of the Communists, and with the pale pseudo-democrat Andrei Bogdanov. The men form a circle of losers half-heartedly battling over the second-place finish following Russian President Vladimir Putin's favorite, Dmitry Medvedev.

In the stale Russian election campaign, it is Zhirinovsky who is good for moderately entertaining slapstick performances, as he sloppily attacks the Communists, the Democrats and economic liberals. "I will close the borders on the day after the election," Zhirinovsky raves. He wants to lock them down, every last one of them. "And if you think that these are the actions of a police state -- well, be my guest. I promise that I will take these actions."

But the strained tirades can hardly hide the fact that the aging Zhirinovsky has become a parody of himself. SPIEGEL called him an "agitator" in 1994, and German tabloid Bild even dubbed him the "Russian Hitler." At that time, Zhirinovsky was still a willing tool of the changing masters of the Kremlin. In 1991 the Russian intelligence service, the KGB, played a major role in the establishment of the LDPR, which Zhirinovsky has led ever since. The artificial party was launched by the Communist rulers of the day in an effort to channel the votes of the disadvantaged and the disappointed.

A Bizarre Alliance with the German People's Union

The Soviet Communist Party's monopoly on power had ended, and Zhirinovsky's LDPR distinguished itself as a toothless, liberal leftist alternative to the Communists. During the years of Boris Yeltsin's presidency, the party's eternal leader fluffed himself up as a radical, anti-Western imperialist. The supposedly neo-fascist adversary helped Yeltsin secure the support of Europe and the United States.

A bizarre alliance with the extremist right-wing German People's Union (DVU), which was under observation by German domestic intelligence, also dates from this era. But the alliance with the German extremists eventually fell apart -- probably because Zhirinovsky preferred to see a Germany that was "as small as Austria."

Nonetheless, in the mid-1990s, nationalists and patriotic forces gained influence in Russia, forming a broad front against Yeltsin. In truth, the LDPR was already like a sedating drug-replacement therapy, a methadone program to neutralize the right-wing voter potential. Although Zhirinovsky clearly relished serving up his sharp rhetoric against the teetering president, in 1999 his LDPR toed the Kremlin line and voted against impeaching Yeltsin.

Nuclear Bombs and a Busty Lady against Great Britain

Meanwhile, the party's faction in the Russian parliament, the Duma, is headed by Zhirinovsky and his son Igor Lebedev and is reputed to have sold seats in parliament to business people of questionable character -- thereby enabling them to achieve immunity from criminal prosecution. LDPR denies the accusations.

Andrei Lugovoi, an LDPR parliamentarian and former member of the Russian intelligence service, is currently wanted for murder by Scotland Yard. He is suspected of having used radioactive plutonium to poison Alexander Litvinenko, a former agent of the Russian intelligence service, FSB, who had fled to London. In the election campaign, Zhirinovsky likes to appear with Lugovoi, whose scandalous candidacy in the parliamentary elections was only made possible with the Kremlin's approval. The Kremlin also owns the security company whose shooting range the LDPR leader uses to blast at cardboard cutouts of his political rivals. 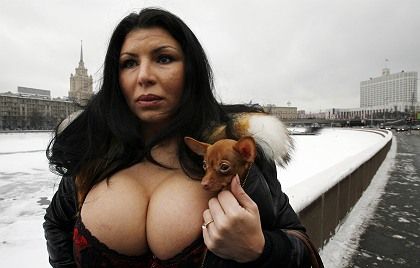 Not even glamour model Iren Ferrari, pictured here with her Chihuahua "Bentley," was enough to rally supporters to an anti-Britain protest staged by Zhirinovksy.

Today this political clown is assiduously collecting votes from the right-wing fringe for Putin. But Zhirinovsky's time is up as radical right-wing boogie-man for the West. Although he has not discontinued his bawdy rallying cries, he has made himself into a laughing stock. He recently encouraged separatism within the Russian minority in the Baltic states and suggested dropping nuclear bombs over the Atlantic in an effort to flood Great Britain.

Meanwhile, the Kremlin itself has pushed for a calculated course of confrontation with the European Union and NATO. Last year, for example, hundreds of pro-Putin youth threatened to demolish the Estonian embassy in Moscow. Zhirinovsky must have turned pale with envy. Despite the prominent support of a mature Russian busty sensation, only a dozen steadfast supporters showed up for his January rally in front of the British embassy.