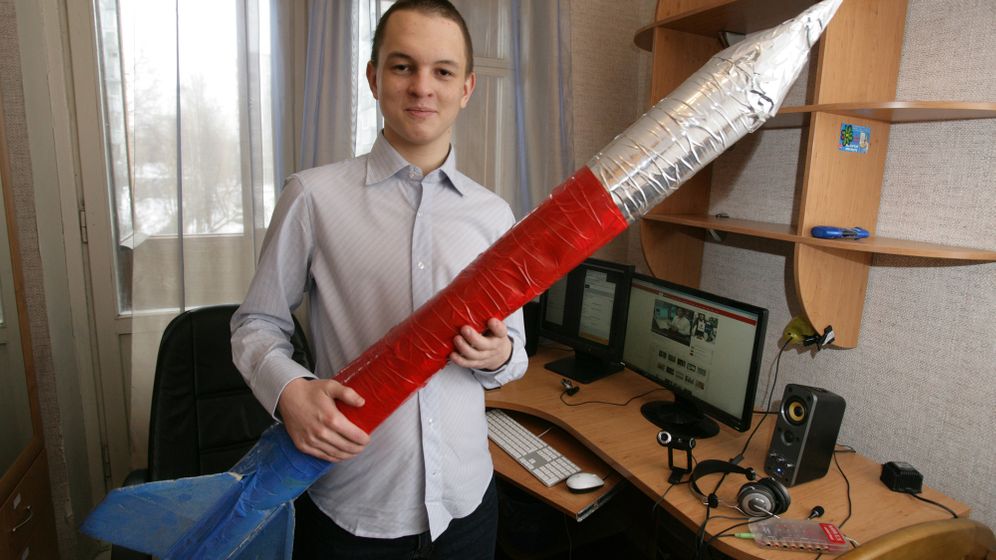 SPIEGEL ONLINE: Andrey, you're 17 and still in school. How much pocket money do you get from your parents?

Ternovskiy: A thousand rubles a week, that's about 25 euros. Why do you ask?

SPIEGEL ONLINE: We're wondering whether you know how to handle money. Your invention, Chatroulette.com, is already being talked about as the next big thing on the Internet. Some experts have suggested that it may be worth anywhere between €10 and €30 million.

Ternovskiy: Don't worry. I know how to handle money. I'm thrifty and I've always managed to keep my savings together. In the past, I would only buy myself an ice cream once in a while. The rest of the time I was saving up for a new computer, a Webcam and other accessories.

SPIEGEL ONLINE: How did you come up with the idea for Chatroulette.com?

Ternovskiy: I've always wanted that kind of site. My friends and I used to video chat over Skype quite often, but that got boring after a while. I always knew who was waiting for me and who I would be speaking to. So I searched Google for a video chat program that operated in a more random way. No such thing existed. So I sat down and wrote software for two days and two nights. And that was the first version of Chatroulette.

SPIEGEL ONLINE: Did you expect this level of interest? After all, CNN has broadcast a piece about you and the New York Times has written about you. And you really only created the site for yourself and your friends. There was no advertising. But then other people found their way to your site -- first they came in the hundreds, then in the thousands.

Ternovskiy: To be fair, I did publicize it on several Web forums after launching it. I was hoping it would be a success, but I have been overwhelmed by the extent of it. In early November there were 500 visitors per day. A month later there were 50,000. Chatroulette now has around 1.5 million users. Approximately 33 percent come from the United States, 5 percent from Germany -- of those, most are from Berlin. But there is someone in virtually every country that uses Chatroulette.

SPIEGEL ONLINE: How did you deal with that tremendous rate of growth? There are people who claim that a 17-year-old couldn't possibly manage such a project, that one would require more resources.

Ternovskiy: It all works out, thanks to the Internet. I manage my site with a free program, Google Analytics. And the server resources can be hired from special Web sites; I pay the bill online too. I have also hired four programmers to work with me on the site.

SPIEGEL ONLINE: We're sitting in your childhood room: There's a bed, a table and two monitors. Where do your employees work? Where is your office?

Ternovskiy: I don't have one. I found my employees on the Web. One of them I've known for five years -- I met him online -- and he lives in Virginia. Another one lives in Belarus.

SPIEGEL ONLINE: Where do you get the money for all of this from?

Ternovskiy: I said to my parents: "Mom, Dad, the site is expanding. You should invest now." My parents did that and their $10,000 were enough to get things started. I actually paid them back a while ago. And I am making very good money at the moment, thanks to the small advertising links to an online dating service on the site. Once in a while we meet in a Moscow restaurant and I pick up an envelope filled with cash.

SPIEGEL ONLINE: Do you have investors knocking at your door?

Ternovskiy: I have received 200 e-mails from venture capital firms in the Silicon Valley alone. Skype has invited me to come to the United States. And Google has also contacted me.

SPIEGEL ONLINE: Will you sell?

Ternovskiy: No, the site will always be mine. I will continue to develop Chatroulette myself. But I could imagine some sort of scheme involving shares in the company.

SPIEGEL ONLINE: Where did you learn programming skills? You're a student at a Moscow school. Is that where one learns these skills, at school in Russia?

Ternovskiy: It's not all about ability, it's also about luck. But in fact, everything I know, I've learned from the Web. To be honest, I rarely go to school.

Ternovskiy: I am a nerd. The web is everything for me. School bores me. I have my own way of learning: I read Wikipedia. School is a waste of my time and I'd rather use that time to program and for business negotiations.

SPIEGEL ONLINE: Russian Web czar Yuri Milner wanted to meet with you recently. His online ventures account for 70 percent of all the traffic on the Russian-speaking Internet. A more typical meeting for him is with President Dmitry Medvedev as part of a commission on the modernization of Russia. He had a private meeting with you that lasted one and a half hours. What was your impression of him?

Ternovskiy: That he was really, really interested in my project. And then I relaxed and enjoyed my success. His office is on the 57th floor and there's a great view of Moscow.

SPIEGEL ONLINE: What do you eventually want to accomplish?

Ternovskiy: I always wanted to have a successful Web site. Now I have one. And now I would like my own company, an office, employees. And I want it in the USA, because that's the center of IT culture. All of the biggest names in IT are in the Silicon Valley -- Google, Microsoft.

SPIEGEL ONLINE: But taxes are very high in the USA.

Ternovskiy: I can register the company in Switzerland.

SPIEGEL ONLINE: Chatroulette is minimalist and, in a way, a return to the uncivilized and wild days of the Internet. Your site attracts many exhibitionists. Some even say that Chatroulette is the antithesis of Facebook, where almost everything can be controlled. So it has the potential to be a pleasant pastime or it could be an entirely new platform for online interaction. But currently nobody seems to know exactly what it is, or what it could be.

Ternovskiy: To me, it's like the street in some big city, where you see all kinds of unknown faces. Some of those faces appeal to you, some disgust you. Chatroulette is a street that you walk along where you can chat to whomever you like. The program makes the Internet more like real life. As for the "freaks and fuckers," I'm working on a solution. I have integrated a "report" function into Chatroulette. If three users complain about the same bum, then that user is automatically banned from using the system. So there are a lot less of them already.