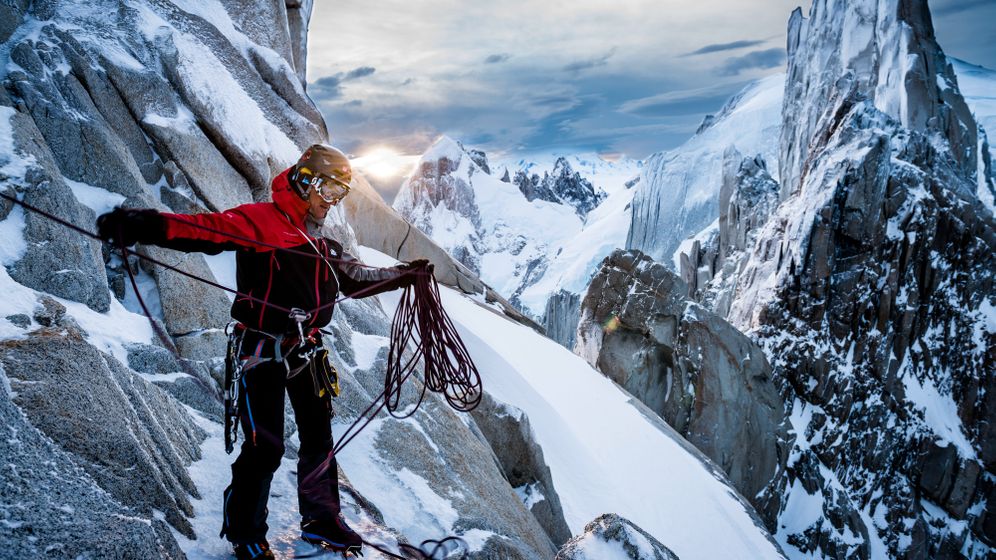 Roger Schäli is a ninja, someone who can silently scale even vertical walls like a cat to reach his goal. Or at least that's how Takio Kato describes him. Kato, who has been living in Switzerland for decades, is a legendary figure among mountain climbers. In the summer of 1969, Kato was part of a team of five Japanese climbers that surmounted the notorious north face of the Eiger by the most direct and, at that time, most difficult route, which led it to be dubbed "Japanese Direttissima."

Working inch by inch, the team used drills, spikes, rope ladders and other equipment to master its steep faces, rocky cliffs and overhangs. And their perseverance paid off: After 30 days, Kato and his fellow climbers stood at the top of this 1,800-meter (5,900-foot) wall.

Schäli, one of Switzerland's best mountain climbers, repeated this feat in 2009 along the same route the Japanese team had taken. But, after several failed attempts, he made his ascent in the so-called "redpoint" style, or lead climbing without falling on a previously attempted climb. He and his climbing partner, Robert Jasper, first ensured that there were holds at critical points so that they could "free climb" the face without using spikes or fixed ropes.

Schäli, who is in exceedingly good shape, is a die-hard athlete who makes a living by publishing a magazine and making films about his climbing passion. He proves that the requirements have changed in climbers' battle to master the Eiger's north face -- for the benefit of alpinists.

Solving the 'Last Problem' in the Alps

The German term for the north face is Nordwand, or "north wall," and the climbers who have gone to their graves trying to climb it have given it the nickname Mordwand, or "murder(ous) wall." Indeed, the climb continued to claim frequent victims all the way into the 1960s.

It wasn't until 75 years ago this Wednesday that the face was finally conquered by a group of Germans and Austrians. And propelling this race to the top was not only natural ambition, but also nationalist pride fanned by Nazi claims of superiority.

In the three years before July 24, 1938, falls, avalanches, falling rocks, freezing temperatures and exhaustion had already claimed the lives of eight climbers, including a number of Germans and Austrians. But this did little to discourage the waves of climbers determined to solve what was then known as the "last problem," the final unmastered ascent in the Alps.

The group that solved this problem was made up of a German team and an Austrian team. Anderl Heckmair and Ludwig Vörg, the German climbers, were mountain guides at an Ordensburg, or training school for Nazi leaders, in Sonthofen, the most southerly town of Germany in western Bavaria. The team from Austria, which had been annexed by Germany just months earlier, in April 1938, was made up of Fritz Kasparek and Heinrich Harrer, who was a National Socialist and member of the SS.

After joining up, the two teams fought their way to the top in four days despite poor equipment, injuries and sudden drops in temperature. Then they descended through a snowstorm -- and into a storm of praise and propaganda. Nazi officials quickly turned their feat into a proof of the unbreakable bond between Germans and Austrians. But they also weren't above incorrectly portraying the Germans as the stronger part of the team, saying that the Austrians were the slower members of the foursome and had to be pulled to the top by the Germans.

A Window into the Abyss

Still, the end of the north face's invincibility did not spell an end to its victims. In the decades after World War II, the constant search for new and more challenging routes to the top drove the death toll higher -- and the victims now came from across the world. At the same time, though, climbers also celebrated a number of alpinist triumphs on the Eiger.

Among the reasons for this were steady improvements in the equipment climbers used. Stephan Siegrist, a leading Swiss mountain climber, explained the difference between what was used then and is used now at an event on the Eiger's north face.

The Jungfrau Railway, completed in 1912 after 16 years of work, runs for nine kilometres (5.6 miles), almost all of it in a tunnel through the Eiger and adjacent Mönch mountains. At one of its two subterranean stops, passengers can get off the train and walk a short distance to the famous Stollenloch, a window that opens out onto the north face. In addition to providing a magnificent view, the window has also been used in many rescue attempts, and climbers who have run into trouble still use the window as a way to get to safety more quickly. Even at the height of summer, visitors can step out onto a balcony made of brittle old snow and look down some 600 to 700 meters, where hiking paths snake through green mountain pastures.

Siegrist is standing at ease on the edge of the abyss. He is a master of so-called combined climbing, which involves covering stretches of rock, ice and snow. This is precisely the terrain that German and Austrian climbers of the 1930s, who were accustomed to scaling rock faces, were trying to surmount. Today, mountain climbers like Siegrist will switch between using crampons and normal shoes while climbing.

Climbing anchors have also changed. Siegrist displays a metal screw as thick as a thumb with a spiked tip and fine exterior threading. This device offers maximum holding power even in fragile ice. By comparison, back in the 1930s, climbers would secure a hold by driving a roughly forged iron spike a little less than 20 centimeters (8 inches) long into the ice. One shudders to imagine the kind of shaky security this ancient-looking piece of metal offered in the ice fields of the Eiger's north face, which is as precipitous and exposed as the roof of a church steeple.

Siegrist has successfully climbed to the top of the north face almost 30 times. Once he even did it using the equipment that would have been available to Anderl Heckmair and Heinrich Harrer. "That was pretty tough," the 40-year-old says, noting how he had particular trouble with the clunky shoes and uncomfortable crampons.

Later, back in Stollen, Seigrist points out the piece of equipment that has probably undergone the largest transformation over time: the ice axe. Even into the 1960s, people climbing the north face were still using traditional axes with long, wooden shafts to chop footholds into the ice. But their modern counterparts use ergonomically shaped axes with jagged teeth on the pick, a wide adze on the head and a spiked shaft, which together create an all-purpose tool that can almost effortlessly be driven into layers of ice of varying consistency.

Without this tool, it would have been impossible for Dani Arnold to break the speed record for climbing the Eiger's north face. In March 2011, the Swiss native reached the top in 2 hours and 28 minutes. But this once unimaginable feat becomes easier to fathom with a look at the other pieces of equipment available to today's climbers. "The first people to climb it were already very good climbers," Arnold says. "The biggest advance has been with the hardware."

For example, Arnold points to the enormous weight reductions in shoes, ropes and clothing. In the past, climbers would have to struggle up the mountain wearing jackets made of sailcloth, which were admittedly wind-proof but would freeze into shells as hard as boards after coming into contact with melting ice. Today's alpinists, by contrast, can rely on highly resistant, breathable and light-weight functional clothing.

Outfitted with such equipment, record-chasers like Arnold prefer to climb the north face in the winter these days, when there is a lower risk of falling rocks and steps in the snow and ice offer better footholds. What's more, depending on the route, climbing the north face is more of an athletic challenge for today's top alpinists than a battle between life and death. "Times have changed," Arnold says. "It's no longer acceptable to require three days."

However, Arnold admits that climbers will always have to worry about injuries from falling rocks and avalanches. But he does say that, even if he were hit, he could still get down to safety from the face with a 50-meter rope he always climbs with. The main thing allowing this, he adds, is the fact that he knows the face in minute detail. Without such knowledge, people can't always be sure that they aren't rappelling over a cliff that is too high, he continues, a mistake that cost German climber Toni Kurz his life in 1936.

In any case, all the top climbers -- including Arnold, Siegrist and Schäli -- agree that one should never underestimate the Eiger. The myth of the unconquerable wall still lives, and alpinists searching to break new ground continue to devise new and more difficult routes to the top. 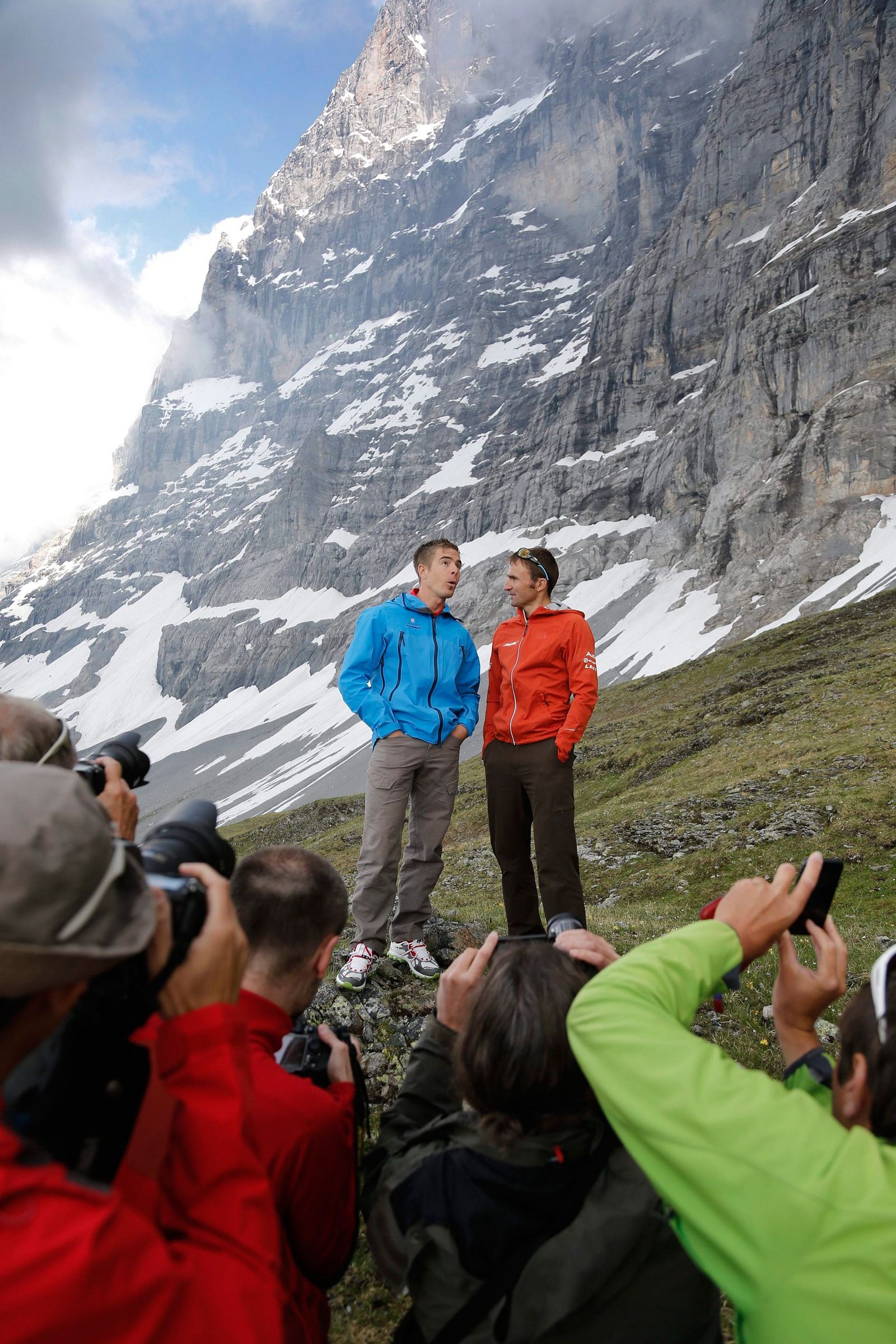 It takes much less time to climb the north face today. In 2008, Ueli Steck (right) climbed it in two hours and 48 minutes. In 2011, fellow Switzerland native Dani Arnold (left) shaved 20 minutes off the record. "The first people to climb it were already very good climbers," Arnold says. "The biggest advance has been with the hardware."