It was the All Saints' Day holiday weekend in 1958, and a fug of pipe and cigarette smoke hung heavy in the air at the Schwarzer Adler Inn in the Allgäu region of the German Alps, where legend has it that farmers gathered during the German Peasants' War in the 16th century. Standing underneath the stag's antlers hanging on the wall, Hans Werner Richter, president of the famed Gruppe 47 literary association, rang a cowbell. It was time for the assembled writers to quiet down and let the debut novelist seated to his right begin his reading.

As Richter later recalled, all it took was a few sentences for the room to be electrified. Grasping a thick wad of papers, the author with the walrus moustache read out loud two chapters of his book. The novelist was Günter Grass and the book was "The Tin Drum". Thirty-one-years-old at the time, he had been a familiar presence at the Gruppe 47 meetings, but until that day in autumn, his talent had gone largely unnoticed. The reading changed everything. "(It) started a whirlwind," says Richter. Siegfried Unseld, who went on to become the head of the prestigious Suhrkamp publishing company, urged Richter to give Grass the Gruppe 47 literature prize, which had last been awarded three years previously. There and then, the writers present began making phone calls and collecting funds -- while Grass himself stood beaming at the bar and downing a homemade fruit brandy whenever Richter came up to him to tell him another 500 deutsche marks had been raised. Before too long, 5,000 deutsche marks had come together.

When "The Tin Drum" was published in 1959, it sent shockwaves through post-war West Germany's literary landscape, which was still sedate despite the best efforts of writers such as Arno Schmidt and Wolfgang Koeppen. Hundreds of thousands of copies sold not just in Germany but across Europe and the foreign rights were even bought in the US, where it was published with an initial print run of 100,000. Only communist East Germany refused the bait, dismissing the novel as "pubescent prose" and an example of "reactionary, decadent literature." The novel was only first published in the German Democratic Republic in 1987.

Literary history is generally written only once every few decades, and Grass's reading was one such occasion. It marked the moment that an era came to an end -- the era of the first generation of postwar literature -- and a new generation was born. The generation of Günter Grass, crowned 40 years later in 1999 with the Nobel Prize for Literature.

By that point, Grass had long since become a German institution -- the country's national symbol, as the weekly Die Zeit once called him. A pugnacious writer who even in his later years continued to wade into public debates with a vehemence that was off-putting to some, be it because of his tendency to see things as black and white or because he was prone to sweeping statements. A writer who spent a lifetime struggling with the legacy of his own early work, trying for decades to replicate the impact of his weighty first book with novels such as "Dog Years," "The Flounder," "The Rat" and "Too Far Afield". His efforts were in vain. It was only with the publication in 2002 of "Crabwalk" and the memoir "Peeling the Onion" in 2007, which saw him revisit the themes of his youth, that he was able to step out of the shadow of Oskar Matzerath.

Oskar Matzerath ranks alongside Faust and Mother Courage as one of the most memorable and best-known figures in German literature, the little boy who decides at the age of three to stop growing and whose most treasured possession is a toy tin drum. Like Grass himself, he was born in Danzig, present-day Gdansk, and witnesses German history from the 1930s to the 1950s from a key position. Oskar Matzerath might have been just 94 centimeters tall (3 foot, 1 inch), but he cast a long shadow, not least over the career of his creator.

Against a backdrop of ten years of a stable but staid government under Germany's first postwar chancellor, Konrad Adenauer, Grass' political irreverence and sexual outspokenness helped usher in the social revolution of the late 1960s and also angered many veterans of the Nazi era's collective frenzy of murder and destruction who had made themselves comfortable in a West Germany that was busy restoring itself in the 1950s.

In 1959, the regional government in Bremen refused to grant Grass the Bremen literature prize on the grounds of blasphemy and obscenity, while an attempt was made in 1961 to put the book on the index of Germany's Federal Department for Media Harmful to Young Persons. By 1963, a total of 24 criminal charges had been brought against him, albeit all of them unsuccessfully. In 1965, when Grass gave a speech in the conservative Christian Democrat Union (CDU) stronghold of Cloppenburg in support of future chancellor Willy Brandt's election campaign, the public held up posters calling him a communist and pelted him with eggs and tomatoes so that he needed police protection to finish.

The mass-circulation Bild newspaper dubbed Grass a "pollutant poet," while Heinrich Lübke, German president from 1959 until 1969, said "some of the things he writes are so lewd that not even married couples would discuss them." In one camp was the CDU politician who, along with Chancellor Kurt-Georg Kiesinger, was symbolic of the Nazis' co-conspirators and willing helpers, and in the other was the young writer campaigning on behalf of the left-leaning Social Democrats. In the 1960s, at least, the fronts were still clearly defined.

That's also why the astonishment and public outrage was so much greater when Grass, almost four decades later, mentioned almost as an aside in his memoir "Peeling the Onion" that he had served at the age of 17 as a tank gunner for the Waffen-SS. It couldn't have been easier at that moment to denounce Grass, and Bernd Neumann, Germany's minister of state for culture at the time, did. When Neumann said, "As the kind of moral authority he always saw himself as, he was damaged," he was also speaking for an entire phalanx of Grass critics.

'The Sum of My Characters'

Grass certainly didn't make things any easier on himself with his confession. "I am the sum of my characters, including the SS men," he had already hinted back in 1988. But no one recognized the weight of his statement at the time. In an interview on German public television in 2006 after the publication of "Peeling the Onion," Grass discussed the months he spent in the "Frundsberg" SS tank division. "I've always thought about it, it was always present," he told his interviewer. "And I was of the opinion that what I did as an author, as a citizen of this country, was the opposite of that which had shaped my youth during the Nazi era and that that sufficed."

It may sound a bit like Grass was promoting himself to the role of judge over his own case in order to disburden himself with a not guilty verdict. It may also be that people had no intention of offsetting Grass' time in the Waffen-SS against his later services. Either way, it is undeniable that Günter Grass made great contributions -- he helped open up West German society and he fought against the idea of making a clean break from Germany's past or glossing it over.

Grass himself claimed to be the person who coined the phrase, "Let's dare more democracy," which became one of the last century's most important slogans in Germany after its adoption by postwar Chancellor Willy Brandt. The novelist also seemed to enjoy diving head first into almost any kind of political confrontation, even if, as in 2012, he alienated former kindred spirits with the criticism of Israel in his poem "What Must Be Said". As a novelist, he had long been a societal institution, even more of a pivotal figure of the 20th century than Bertolt Brecht. The only man on equal footing with him was Thomas Mann. Even so, nothing could have been more alien to Grass than Mann's affluent and bourgeois milieu. There was something plebeian about the rowdy, clear words with which Grass jumped into the ring throughout his life.

His intellect came across as being grounded. And in contrast to other famous writers of his generation like Martin Walser or Hans Magnus Enzensberger, Grass was never a left-wing radical. And yet he was long a part of the left spectrum. One day, the work of Günter Grass will single-handedly suffice to explain the history of West German protest culture. Although he once said that the term "littérature engage" -- or committed literature -- the idea of the artist's responsibility to society in the postwar era -- was simply a fashionable term from the 1960s that disgusted him, he nevertheless agitated against the German Emergency Acts, which ended the special powers the Allied forces had over Germany, the NATO Double-Track Decision -- under which the alliance offered to negotiate reduction of certain nuclear weapons with the Soviets if they could be offset by other American ones if those talks failed -- and the way in which German reunification took place. In his later years, he criticized the power of the banks, demanded a renunciation of capitalism and signed appeals against the selection of the salt dome in Gorleben as Germany's final storage site for nuclear waste.

'As Poor as a Church Mouse'

Grass was born on Oct. 16, 1927 in Danzig's working class Langfuhr neighborhood. His father ran a grocery store and his mother, as Grass was fond of telling and mythologizing, was the offspring of Kashubians, a Slavic ethnic group. As a child, he grew up in a modest two-room apartment with a small kitchen and a toilet shared with other families on the landing. The children didn't even have their own room in the apartment. "My sister and I each had a niche under the window sills of the living room. That's where I put my books and my things," he once said.

Although Grass studied sculpture and graphics at the Düsseldorf Kunstakademie, a famous art school in the city, from 1948 to 1952, following an apprenticeship in stone masonry, he still considered himself to be an autodidactic throughout his life. "I was an uneducated or only partially educated young man," he would recall. "I quit school at the age of 15 and I couldn't even spell properly when I began writing my first longer manuscript." Indeed, the manuscript for "The Tin Drum" was full of spelling mistakes.

Grass never lost the mordant wit he developed fighting his own way to the top. One well-known German poet once called him "Mister Testosterone" behind his back. Culture writer Fritz J. Raddatz, who was a longtime friend of Grass', wrote in his memoirs that "he always makes these imperial gestures that he wants to say something, and gets aggravated when others are talking rather than waiting for the sphinx to speak and solve all the world's riddles."

After many years spent living in Berlin's Friedenau district and a sojourn in the Algarve, Portugal, Grass settled in Behlendorf in Schleswig-Holstein, where he could often be seen walking along the river smoking the obligatory pipe. He married his second wife in 1979 and was the father of six children from four relationships.

In 2010, Grass published his last major work "Grimm's Words," a biography of the Brothers Grimm and a sequel to his own autobiography in one. In an interview with SPIEGEL, he played down the significance of his Nobel prize and said that another award had been far more formative. "The Gruppe 47 prize for literature in 1958 meant more to me because at that point, I was as poor as a church mouse."

Grass proved he was worthy of the prize. That promising young novelist went on to become a literary icon.

Günter Grass died in Lübeck on Monday at the age of 87. 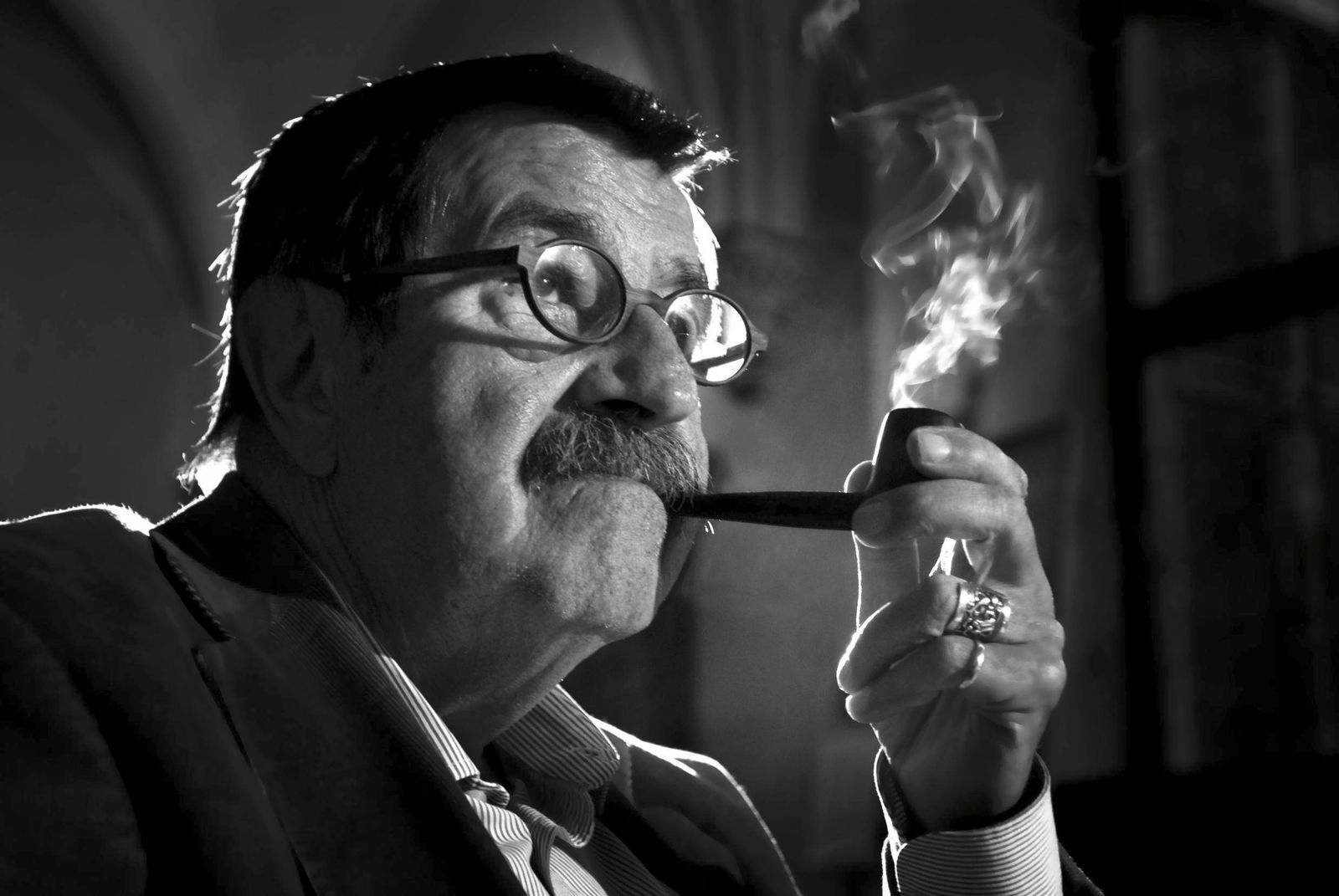 Nobel Prize for Literature winning German author Günter Grass passed away on Monday at the age of 87.