John Durant greets the hunter-gatherers of New York once a month in his apartment on the Upper East Side. They eat homemade beef jerky, huddle around the hearth and swap recipes for carpaccio with vegetables or roasted wild boar.

Often enough, the host will deliberately skip a few meals the next day. After all, didn't his earliest ancestors starve a little between hunts? Instead of eating, Durant prefers to run barefoot across Brooklyn Bridge. In the winter, he takes part in the Coney Island Polar Bear swim in the icy Atlantic. 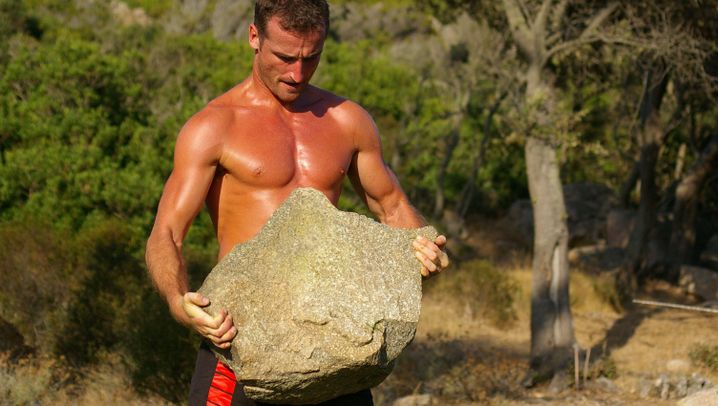 The 26-year-old and the other members of the New York group promoting what they term "Evolutionary Fitness" (EF) are part of a growing subculture that seeks health and happiness by emulating their Paleolithic forefathers. This diehard clan of modern-day cavemen call themselves "hunter-gatherers" or "paleos". Their philosophy is based on the idea that the human body is best suited to the lifestyle of the people who roamed the Earth tens of thousands of years ago.

Not surprisingly, the diet of these 21st-century hunter-gatherers is packed with meat. But they also practice climbing, sprinting and leaping as it they still lived in fear of marauding mammoths. Some even donate blood as part of their Stone Age existence. After all, hadn't their forebears spilt a lot of blood fighting saber-toothed tigers and their ilk?

Attuned to the Rhythm of the Seasons

"What did people eat back then? How did they move about? And what does it mean for us today?" Durant asks. The answers, he suggests, are obvious. Human genes are perfect for a nomadic existence; for the life of a hunter-gatherer attuned to the rhythm of the seasons.

"Prehistoric life was a very long camping trip with no camp stove or energy bars to get us through," says Arthur De Vany. The retired economics professor is something like the movement's guiding force. "We're not trying to idealize Stone Age Man," he says. However, he does think that evolution allows us to make some inferences about how we could lead healthier, happier lives.

De Vany and his wife Carmela live in a small settlement called Washington in the Utah desert. Their lounge window looks out over a lush green golf course. "I often sprint a bit out there in the morning," 72-year-old De Vany says. For the past 25 years he's been following a plan of his own devising. His body is like that of an athletic 45-year-old. He's 185 centimeters (6'1") tall, and weighs 95kg (210 pounds) -- "with just 8 percent body fat". De Vany can hit a golf ball 250 meters (275 yards), and likes to test his muscles by pulling his Land Rover with a rope.

This born-again caveman exercises no more than twice a week, and for barely an hour each time. He thinks continuous exertion like jogging is harmful. "Have you ever tried to butcher a mammoth with a stone?" the fitness guru asks. The key to happiness à la De Vany lies in short but intense physical activity.

He also sets himself strict nutritional rules. Paleo food may consist only of the kind of things that our ancient ancestors would have eaten. Muesli? An abomination in the eyes of this modern-day Fred Flintstone. Spaghetti? "A plate full of sugar," De Vany counters. He considers carbohydrates of all kinds to be hellish. Followers of EF shun potatoes, chocolate, pizza and bread as well as milk, cheese and refined oils. Instead there's lots of game and fish, fresh vegetables, seeds and fruit.

"We try to only eat what was around before the invention of agriculture," De Vany explains. And variety is the spice of life. One morning Carmela serves roast turkey with bacon for breakfast, another day there's half an avocado.

The former professor has a pretty precise idea about the life of prehistoric Man. "I admire their skill and their resilience," he enthuses. "They could survive freezing nights without clothing."

De Vany is a romantic. Even so, researchers are prepared to confirm some of his theories. Lynda Frassetto, a doctor at the University of California in San Fransisco, conducted an experiment in which she put healthy subjects on a paleo diet for just 10 days, feeding them nothing but lean meat, fruit, vegetables and nuts. Everything else was strictly forbidden. Lo and behold, the subjects' blood pressure improved and their insulin levels sank.

"Healthy Stone Age people were far stronger and fitter than we are today," claims US anthropologist John Shea. He says tiny fractures in the bones of long-deceased hunter-gatherers can tell researchers a lot about the lives of ancient Man: "Their activities varied greatly. When they were looking for food, they ran a lot. But they probably only hunted about once a week."

Although their average life expectancy was very short, he posits it was not due to ill-health, but rather because of infection, accidents, and the high infant mortality rate.

So is it really wise to surrender ourselves to our brutish past? Richard Nikoley in San Jose, California, is convinced it is. His Web site is called "Free the Animal", and he's already unleashed his inner beast. Three years ago he weighed more than 100 kilograms (230 pounds). Today he's almost 30 kilos (60 pounds) lighter. And the 49-year-old says he's "never felt stronger."

Nikoley is particularly fond of showing his bare torso. He's not afraid of suffering for his beliefs either. "Animals don't hunt on full stomachs," he asserts. The businessman has fasted for 30 hours at a stretch between workouts before eating again. His finding: "My head has never been clearer."

Back in New York, Durant recently met with one of the pioneers of the movement. Thirty-eight-year-old Erwan Le Corre is a kind of Stone Age revivalist. The Frenchman may wear sport shorts rather than a loincloth, but his body looks like he could pick a fight with a woolly rhinoceros.

Le Corre's fitness club is the great outdoors. Take part in one of his courses, and you'll find yourself crawling on all fours through the undergrowth, playing knock-down with stones the size of bowling balls, and running half-naked through the jungle. "It was amazing," Durant says of his recent visit to the master's training camp in Mexico. "We climbed trees, we learned how to jump properly and we dragged tree trunks around."

The life of the average latter-day wimp is dull by comparison. "I consider us modern humans to be more or less like lab rats, living in a protected environment, free from predation, and with a predictable food supply," De Vany bemoans. Caged rodents may live three times as long on average than their wild ancestors, but at what price?

"There's an experiment in which you hang a rat from a wire and see how long it can hold on," De Vany explains. "Laboratory rats fall to the ground after only a short time."

And wild rats? "They pull themselves up and scamper away."

Translated from the German by Jan Liebelt