At first, Giorgia Boscolo hardly stands out, blending in as she does with the busy confusion on the Canal Grande. The surrounding palazzi gleam in the morning light, and tourists from all over the world pack the canal banks, unfolding their city maps. It's a beautiful day in Venice -- a typical day in this city of run-down charm.

Then Boscolo emerges from the crowd, plunging her oar at an angle into the silver-blue water, rowing with powerful strokes. She maneuvers expertly around the noisy motorboat ferries that churn the canal into foaming eddies. Boscolo has blond hair pulled back in a braid and gold-painted fingernails. She often wears tight, dark pants together with a gondolier's traditional blue-and-white striped shirt. 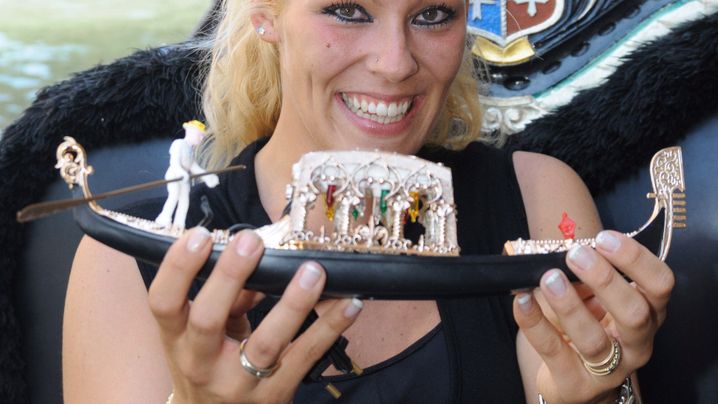 Tourists on the ferries and bridges point at the woman in the gondola, calling out to her and snapping pictures. She simply rows her boat and gives her consent with a smile on her face.

A Lone Woman among the Guys

Born in Venice's Castello district, Boscolo, first trained as a gymnast. Physically fit and very attractive, she is now the city's first gondoliera, a female gondolier. She is living proof that traditional gender roles can shift in this museum of a city that welcomes 22 million tourists every year.

Boscolo's colleagues don't see it quite the same way. Standing around the gondola pier in grim-faced groups, sunglasses pushed up high on their clean-shaven heads, they curse at the cheering tourists. Anyone who stops to ask how she stands being one lone woman among all those guys gets chased away.

Boscolo has been navigating the Canal Grande for just a few months. She's still a co-pilot, a probationary period on her way to becoming a fully licensed gondoliera. If she proves herself, she gets to stay.

Hers is certainly one of the world's most beautiful workplaces. At the San Tomá stop, by a bend south of the Rialto Bridge and not far from one of the last gondola dockyards, Boscolo ferries passengers across the canal. She offers a hand, smiles, lifts shopping bags into the gondola, accepts the fare -- 50 cents per crossing -- and politely thanks her customers.

For the time being, Boscolo is following the rules, taking a subordinate role to the men. She catches enough flack already.

"Come at the end of the work day," she says quickly. "I'm allowed to speak to you then."

This summer, Boscolo passed the qualifying exam to get into the city's gondoliering vocational program. It was her second attempt, and she was the lowest scorer out of 22 applicants, receiving exactly the same number of points as one of the men. Since age counts in this profession, and she was five years younger than him, Boscolo got the spot.

"After 900 years, the taboo is broken," Italian newspapers declared. The news was covered around the world, all the way to Japan and Australia.

The gondolier profession in Venice is still organized like an old-fashioned guild, with fathers passing on their rowing skills and official licenses to their sons. This is the first time a woman has made it -- after nearly a millennium -- and she did so by being ambitious, stubborn and good. Tourists are curious about her, but the reaction from other gondoliers hasn't been quite as favorable. Boscolo's story is causing some scandal and resentment in the city of canals.

'Risks Being Thrown Out'

Boscolo ran into a spot of trouble when local newspaper Il Gazzettino reported she had taken money for photos and interviews, hired an agent and adopted the arrogant airs of a star.

"She should learn the rules," said the president of the gondoliers' association. "If she believes she can make big money here, she's going to lose her footing."

"We were proud that a woman finally broke the ice," warned a colleague. "If she takes advantage of that, she risks being thrown out."

Coming off her shift at 4 p.m., Boscolo shows off the calluses on her hands. Her two sons, aged three and five, play nearby. Venice's first female gondolier is also a working mother, and she doesn't have an answer to questions of how it feels to be a pioneer or a star. She says she's never accepted a cent for photos, and there's no agent -- just her sister, who sometimes makes appointments for her over the phone. What really counts now, she adds, is the final exam. If she passes, she'll receive a license to have her own gondola and transport passengers. More women will follow in her footsteps, she's sure of that.

She knows, too, that the gondolier profession is a dying one. There was a time when thousands plied the city's canals. Today, only about 400 are left. But Boscolo never wanted to be anything else. Even as a child she was a "testa dura," she says, stubborn. Sometimes she rows out alone to San Michele, Venice's cemetery island, to visit the grave of her mother, who died of cancer earlier in the year. Near the end, she told her daughter: "Live your dream. If anyone can make it, it's you."

Boscolo took on the role of gondolier in the traditional way -- her father is also a gondolier, one of the best known on the lagoon. It makes her presence more palatable to her colleagues. If there has to be a woman here, their attitude suggests, at least it's one of us. So far, only one other woman, a German, has taken the test. She failed -- to the relief of the city's gondoliers -- and now works privately, piloting a gondola for a hotel.

Dante Boscolo, Giorgia's father, bears something of a resemblance to Popeye, with a powerful upper body, a ring in his ear and tattoo-covered arms. His gondola is found at the fish market, where merchants throw fish guts to the seagulls at lunchtime.

Dante, 53, has four daughters and no sons -- it seems he could be content with the way things have turned out. Popping open a Peroni beer, he says how proud he is that Giorgia is carrying on the family tradition. But even he can't quite free himself from his role as a father. "Rowing a gondola really isn't a job for a woman," he says. "Too little muscle, too susceptible to wind and weather."