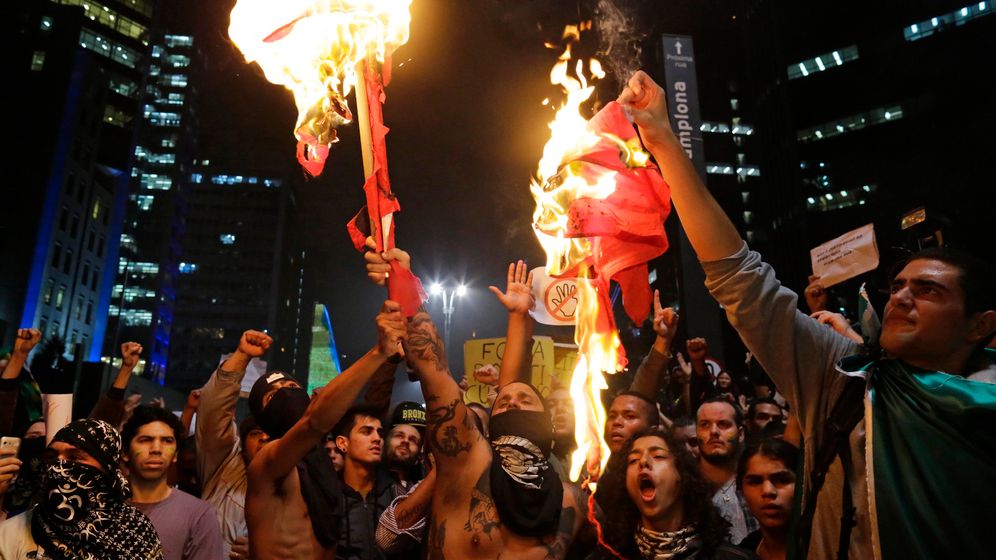 The Hotel Glória was once Brazil's finest establishment. Heads of state stayed in the magnificent building when Rio de Janeiro was still the capital. But the hotel lost its luster and its high-class clientele. Five years ago, a multibillionaire bought the hotel and vowed to bring back the old glory.

Eike Batista, who was Brazil's richest man at the time, had big plans: He wanted to build a luxury resort, complete with a helipad and marina. He hired star architects and the building was gutted down to its foundation walls. The idea was to reopen the hotel in time for next year's World Cup soccer championship. But now the cranes are standing still and most of the workers have been laid off. The wind blows through the windows and a homeless man is sleeping under an awning. The hotel is for sale. The multibillionaire has run out of money.

The downfall of the Batista empire symbolizes the end of the economic boom -- and the multibillionaire embodies everything that hundreds of thousands of Brazilians, primarily from the middle class, are protesting against: nepotism, delusions of grandeur and the fabulous wealth of a select few. It started with demonstrations against raising the bus fare by 20 centavos (9 US cents), but rapidly became a more general uproar over the issue of who should benefit from Brazil's riches and what is more important -- new hospitals or glittering sports stadiums.

Batista enjoyed close ties with Brazilian President Luiz Inácio Lula da Silva, who extolled him as a model for the new Brazil. He received massive loans from the state, and when his son hit and killed a cyclist with his sports car, expensive lawyers managed to keep the young man from serving a prison sentence. A consortium that included Batista was awarded the contract to manage the rebuilt Maracanã Stadium in Rio. The renovation of the Hotel Glória is also financed with a loan from the state development bank. And Brazil's state-owned Petrobras has signed a deal to make Batista's port facilities more profitable.

The entrepreneur became the seventh richest man in the world in 2012, with a net worth of $30 billion ($23 billion). Then everything collapsed: Stock prices have plummeted in his empire of oil, mining and energy companies. His fortune has melted away to nearly one-third of its former size. He has slipped to 100th place in Forbes magazine's ranking of the world's richest people. Last week alone one of his companies lost 40 percent of its stock market value.

Batista also attracted investors with the prospect of huge oil reserves off Brazil's coast and promised them an increase in infrastructure contracts. But the wells have not supplied as much oil as hoped and many predictions have not materialized. Batista's "X" empire, as he likes to call his consortium, has turned out to be nothing but a pipe dream.

Brazil has always been a permissive society. Those who are rich are rarely held accountable for their crimes. Politicians invoke their parliamentary immunity and there are plenty of kleptocrats in the country's town halls, governor's palaces and the National Congress, the legislative body of Brazil's federal government. According to a cynical Brazilian saying, "tudo acaba em samba" -- everything ends in a samba. For decades, Brazil's rich and powerful have relied on this culture of impunity.

It is also the fury over this mentality that is fueling the wave of protests rolling across the country. But the government has apparently failed to grasp this new development. It has reacted as usual: First, it tried to violently suppress the protests, then it tried to co-opt the protesters. Brazilian President Dilma Rousseff praised the demonstrators, and the mayors of São Paulo and Rio de Janeiro rescinded the bus fare hike.

The protests are rocking the country at a critical moment. The Brazilian economy is starting to falter. Last year, it only grew by 0.9 percent, making Brazil the laggard among the emerging economies known as the BRICS -- Brazil, Russia, India, China and South Africa.

Will the boom of the Lula years now be followed by the Brazilian blues? "The optimism was exaggerated, as is the pessimism," says Ilan Goldfajn, chief economist at Brazil's largest bank, Itaú Unibanco. Rating agencies are predicting economic growth of 2.5 percent for this year. Rousseff is trying to fuel consumption in a bid to kickstart the economy again. She has lowered interest rates, but this approach hasn't been successful. Many Brazilians are deeply in debt. They have purchased homes and cars on credit, and now they have to save money.

A Jump in Inflation

Furthermore, lowering interest rates has led to a rise in inflation, with significant price increases primarily for food and services. For a while, tomatoes were so prohibitively expensive that smugglers brought them into the country over the Argentinean border. Although the government has now raised interest rates again, this move will hardly be enough to stop inflation. The decline of the Brazilian real is continuing to fuel price increases, and imports are becoming increasingly expensive.

The jumps in prices evoke memories of the decades in which the country suffered from high inflation. The construction of the capital Brasília and megaprojects launched by the military dictatorship saddled subsequent democratic governments with a huge mountain of debt. By the mid-1980s, prices had exploded. The Brazilian central bank has introduced five new currencies since then. It wasn't until 1994 that then-Finance Minister Fernando Henrique Cardoso managed to stabilize the economy with a combination of austerity measures and currency reform.

In 2002, when the former labor leader Lula was elected, many investors pulled out their money. They were afraid that Lula would abandon the stability policy of his predecessor. But the left-wing politician surprised the financial world, and there were no socialist experiments. At the same time, there was a rise in global prices for fuel and food, Brazil's main exports. Billions in investments flowed into the country and the real became a highly overvalued currency.

The government introduced generous social programs for the poor, allowing 20 million Brazilians to climb into the middle class. During his second term in office, though, Lula threw open state coffers to launch megaprojects and grant loans to the poor -- all of which helped the campaign of his successor Rousseff, who used this political capital to win the 2010 presidential election.

Economic experts hoped that Rousseff would return to an orthodox financial policy. Instead, she lowered interest rates and intervened in monetary policy. She has expanded state capitalism in the country and founded a number of new state-owned companies. Meanwhile, important structural reforms have become mired in government bureaucracy. The road network is dilapidated, the ports are run by corrupt trade unions and efforts to expand the airports have bogged down. Even the exploitation of deep-sea oil reserves has stagnated due to a lack of technology. In 2006, Lula proudly announced that Brazil would achieve self-sufficiency thanks to its crude oil production. Now, gasoline and ethanol have to be imported.

Not much happens without the government in Brazil and, not surprisingly, corruption continues to flourish. The renovation and new construction of sports facilities for the World Cup and the Olympic Games was negotiated with only a handful of large contracting companies, and the projects are billions over budget. This wheeling and dealing between the government and companies is yet another reason why the middle class is up in arms.

Along with the poor and students, a large number of business people are taking to the streets. Shop owners and cab drivers have spontaneously joined the demonstrations. "There's plenty of money -- we pay enormous amounts of taxes," says Raoni Nery, 27, who joined the protest marches in Rio, "but we don't receive anything in return."

The computer expert runs a small IT company and would like to hire someone to help: "But I can't afford it because social security contributions are too high. Our employment legislation is totally outdated," he says. It takes months to establish a company, and nobody seems to understand the maze of laws and regulations. Anyone who wants to open a business often has to pay bribes to inspectors from the city administration.

Large companies write off special expenses for transport, bureaucracy and corruption as "custo Brasil," meaning "Brazil costs." Ultimately, it's the customers who pay for this.

In view of the upcoming presidential election next year, the government is again opening its coffers. Two weeks ago, President Rousseff announced a special election present: Anyone who has been granted a low-interest state loan for a house can acquire an additional low-cost loan of up to 5,000 reais -- to purchase appliances and furniture.