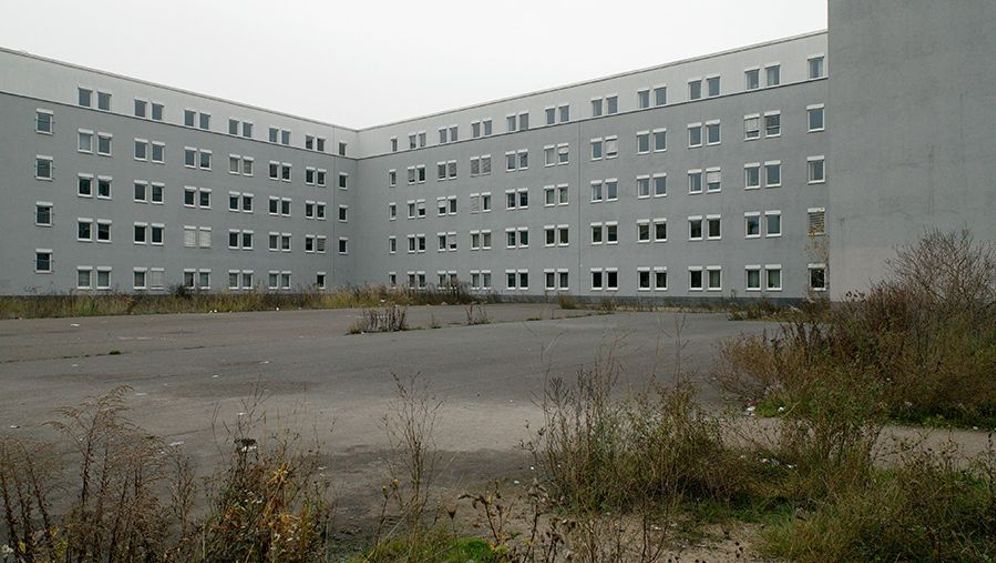 Eerie wastelands, communist-era housing blocks and gaps in residential streets where houses were bombed: Berlin is a city full of quirks in the urban landscape, the results of its unique history. The destruction of World War II, followed by the city's division during the Cold War, means that traces of the past can be found everywhere -- even if many of those reminders of Berlin's tangled history have disappeared in the construction boom that followed the fall of the Wall in 1989.

Now a new book by the photographer Andreas Muhs documents Berlin's many crumbling corners and empty downtown spaces, paying homage to a city that is constantly in the process of reinventing itself.

The photos in "Rest-Berlin" ("Berlin Remnants") reveal a city in a state of flux. Muhs zooms in on disjointed inner-city spaces. His images show grass sprouting through concrete in urban wastelands and row after row of pre-fabricated East German housing blocks.

Muhs says he is fascinated by buildings and spaces which are still in their original state, like facades which still show traces of World War II streetfighting, or unused tracts of land which have still not been built upon even 20 years after the fall of the Wall. "What the images have in common is emptiness and lack of use," Muhs told SPIEGEL ONLINE. "At the same time they function as free space for the city."

As a European metropolis, Berlin is exceptional, Muhs says, as a result of the ravages of the 20th century. The city was "practically broken" as a result of the war-time destruction and its postwar division, he says. "Both halves of the city were kept artificially alive, and any remaining industry vanished after the fall of the Wall." The traces of the Wall and the so-called "death strip" which ran along it can still be seen in parts of the city. "As a result of the division, a swath was cleared through the city, which is still visible today and which has only been successfully closed in a few places," Muhs said.

The photographer says he was struck by how the city's empty spaces are exploited for temporary and provisional uses: "Clubs open in old warehouses, artists set up studios in back courtyards, and informal trailer cities occupy areas of wasteland." He says that current developments, such as the threatened closure of the alternative arts center Tacheles, show that such "free spaces" are facing an existential threat, however.

Many Berliners are concerned that the counterculture which defined the city in the 1990s is now disappearing as a result of gentrification. There has been a wave of investment in Berlin real estate in recent years and expensive apartment blocks have sprung up across former East Berlin in areas which used to be home to squats and alternative bars and clubs.

Nevertheless, the photographer is optimistic about the city's future. "I consider Berlin to be an incomparable metropolis which still has enough potential and free space in order to continue to develop, something that is no longer the case in many other cities."

The book is a documentary work, he says. "I wanted to record the state of the city without wanting to preserve it. Naturally old buildings have to be saved from falling into disrepair and wastelands have to be built upon again." He says he wanted to document as many free spaces as possible before they disappear as the city continues to develop. "I personally will certainly miss these places."