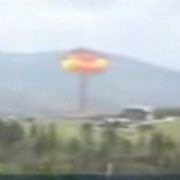 The landscape is real, but not the cloud. The Ztohoven artists' group says it wanted to point out how easy it was to manipulate images on the news.

Last June, anyone watching a certain Czech weather channel at the right moment saw a panning shot of the countryside near the Krkonose, or Giant Mountains, in Bohemia, when a yellow flash filled their screens and a skinny mushroom cloud lifted in the distance.

It was a hoax. A Czech artists' group had inserted the explosion digitally. A state prosecutor said on Thursday that six members of the group will now have to stand trial for the hack. They could face up to three years in jail.

The TV channel CT2 received frantic phone calls from viewers who thought a nuclear war had started. But the Prague-based collective, Ztohoven, said it had mounted the hoax to show how media images could be manipulated.

"We are neither a terrorist organization nor a political group," a statement by Ztohoven said. "Our aim is not to intimidate society or manipulate it, which is something we witness on a daily basis both in the real world and that created by the media. On June 17 2007, [we] attacked the space of TV broadcasting, distorting it, questioning its truthfulness and its credibility."

They had climbed a TV tower and hacked into the weather camera and broadcast cable with a computer. They also inserted a Web address for Ztohoven in a corner of the screen.

No one was hurt, but a spokesman for Czech Television said, according to the UK's Guardian newspaper, "The fake broadcast was really very inadvisable and could have provoked panic among a wide group of people."

Ztohoven won an award for young artists last year from Prague's National Gallery -- unconnected to the mushrtoom-cloud stunt -- and in 2003, when President Vaclav Havel stepped down, they covered half of a red heart-shaped neon installation at Prague Castle so that it resembled a question mark.