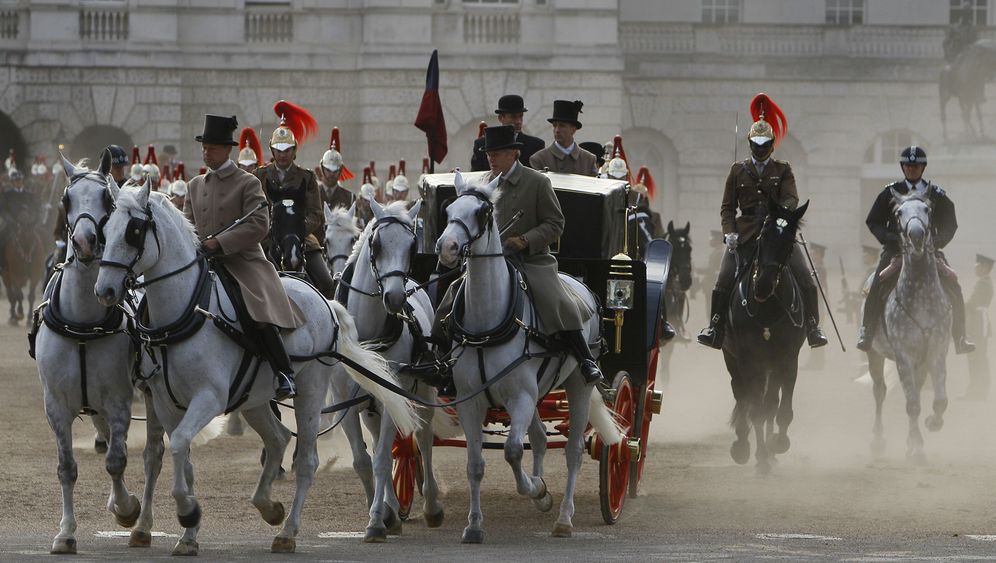 The whole thing feels like an aberration of history.

It's wrong if the head of state of a country can only come from one family. It's wrong to furnish this clan with palaces, land and all manner of grants to spare its members the indignity of having to earn their keep and enable them to live in luxury. It is wrong to address the Windsors and, from next Friday the delightful Kate Middleton as well, as Your Royal Highness or even Your Majesty. It is wrong to see them as anything other than people made of flesh and blood, like you and I.

Millions of Britons know that. The Guardian newspaper wants to abolish the monarchy, as does the Independent and the Economist magazine. Many professors, film directors, writers, actors and politicians would like Britain to become a republic -- but they remain in the minority which for years has been constant at around 18 percent of the population.

Cherie Blair, the difficult wife of the former Prime Minister Tony, once refused to curtsey in front of the old Mrs. Elizabeth Windsor, but the majority of Britons enjoy doing that, and much more, for Queen and Country. The Windsors are Europe's most expensive royal family, but the people go on paying, without grumbling, at least as long as Queen Elizabeth remains alive.

The Queen Owns all the Swans, Whales and Sturgeons

But Great Britain is a strange country. It has no written constitution but a rigid class system. The lawyers wear wigs in court and there are no citizens, just subjects. By law, all swans, all whales and all sturgeons are the property of the Queen, but there's no British national football team.

And if the Queen wishes to award an honor to one of her subjects, he can proudly call himself "Officer" or even "Commander of the Order of the British Empire." What on earth do these titles actually refer to? Much in this realm seems at least as antiquated as the London Underground.

British soldiers are fighting for democracy in Afghanistan and Libya, and they fought for it in Iraq. But at home, they defend the absurdly undemocratic idea that nobody but a Windsor can be head of state. As soon as Elizabeth, 85, shuffles off her mortal coil, her son Charles, 62, already worn down by his long wait for the accession, will take the throne, even though opinion polls show the majority of Britons don't want the brooding, esoteric prince to become king.

The pomp and ceremony surrounding the marriage of William and Kate is the latest expression of British eccentricity -- but a large part of the world appears to be succumbing to it as well.

Yes, the carriages of gold and velvet look pretty, the bride's train will be a sight to behold and Westminster Abbey is quite a spectacular backdrop for the ceremony. But is it really worth all the fuss? More than 10,000 journalists are descending on London. The German networks ARD, ZDF, Sat.1, RTL, n-tv and N24 will hardly be broadcasting anything else on Friday. Everyone is pretending that this spectacle is the most important and beautiful event on earth -- but it is not.

Oddly, the British public isn't as interested in the wedding as one might think. Most Britons say they don't really care about the event. Only about a third of them plan to watch the show on TV. And, compared to previous royal nuptials, relatively few of them plan to take part in the traditional street parties. In the center of London, hotels have plenty of spare rooms even though they have been offering discount deals for the weekend.

Millions of British subjects already fled the island on budget airlines before Easter and are now populating the beaches of Turkey, Cyprus, Egypt or the Caribbean. The weather there is guaranteed to be better than in London, where heavy rain is forecast for Friday.

Britain is still mired in its worst economic crisis since World War II. Everyone should be rolling up their sleeves to haul the nation out of the doldrums. But the government declared the wedding day a public holiday, and schools, banks, offices and factories will be closed -- just because the heir to the heir to the throne is getting married. The extra holiday may lead to increased turnover in the nation's pubs, but it will end up costing the economy billions.

A Wedding Dictated by Palace Protocol

In truth, the marriage of William and Kate is a sad spectacle. Two young people aren't getting wed in the way they would like but how the palace, protocol and granny demand it.

William, 28, is accustomed to that because he was born into it. But for Kate, 29, Friday will mark the end of her freedom. For her parents, it will be a bit like the death of their daughter. She won't belong to them anymore -- she will be elevated to some form of distant, aristocratic human being, forever unavailable for that impromptu dinner with Mum and Dad.

Some friends and relatives will be present in Westminster Abbey, but most of the guests will be strangers, and some of them will be repulsive ones at that. King Mswati, the despot of the impoverished African nation of Swaziland who has 13 wives, will be flying in with his entourage of 50 people. Arab potentates have also been invited, some of whom are currently having pro-democracy demonstrators shot at in their streets. Who would want to get married in such company?

Half the British cabinet is coming, along with opposition Labour leader Ed Miliband, who bears the grand official title "Leader of her Majesty's Loyal Opposition." Former conservative Prime Minister John Major will be present. But the last two Labour prime ministers, Tony Blair and Gordon Brown, have not been invited. Is that their punishment for having supported the ban on fox hunting? Why should the autocratic Sultan of Brunei get invited and not the two previous leaders of a democratically elected British government?

The whole world is waiting to admire Kate's wedding dress. The designer will be inundated with work after this. But the wearer of the dress faces a future that shouldn't really be desirable for an intelligent woman in the 21st century. Kate will have only three tasks from now on: serving her husband, looking good and bearing children, preferably boys. Apart from that, all she has to do is shut up.

It's like in the 1950s -- only much worse because she will have to continue curtseying to the Queen and other higher-ranking members of the family she has married in to.

The whole thing feels even worse than just an aberration of history. It's a joke.