A torn-up sandbag at kilometer 67.3 provides evidence of a recent attack. It's covering over a hole about halfway up the dike. If you keep walking, you'll find more and more of them just a few steps apart.

For those living in the low-lying fields of the Oderbruch, a region of marshland drained in the 18th century east of Berlin and along the border with Poland, the dikes are a matter of life and death. If you need proof, look no further than the dramatic flooding of 1997 or the countless smaller ones thereafter. But now the region has some gnawing problems: Ever since the last time the Oder River flooded, beavers have been burrowing their way into the soft underbellies of the dikes. 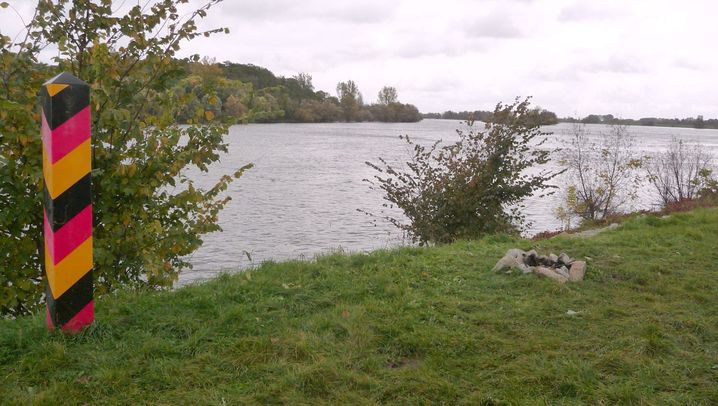 Indeed, more and more holes are appearing on the side of the embankment facing the river. "There are corridors stretching 10-15 meters down there," says Günter Wartenberg, an official with the Environmental Agency of the northeastern state of Brandenburg. Officials like Wartenberg are sounding the alarm: Beavers have damaged roughly 77 of the dike's 172 kilometers (107 miles). And the 20,000 people living in the Oderbruch region are now living in fear of the estimated 250-500 beavers in their midst.

"A beaver doesn't have any business being at a dike," says Matthias Freude, a biologist who heads the Environmental Agency at its headquarters in Potsdam. "In the long run, the levees can get breeched and become very dangerous." Freude's job requires him to reconcile two occasionally clashing goals: guaranteeing the well-being of the endangered beaver, on the one hand, and the structural soundness of the Oder River's dikes, on the other.

As Freude explains, it is pure desperation that drives beavers to burrow into the embankments. When their habitats are flooded, they go out in search for a dry place for themselves and their offspring. And when that happens, Freude says, "the dike is the only high ground the beaver has left."

According to statistics compiled by Freude's agency, Brandenburg is home to roughly 2,500 beavers. These animals are a subspecies of the European beaver known as the "Elbe beaver," which the International Union for Conservation of Nature (IUCN) classifies as an endangered species. In recent years, the beaver population has grown steadily. That's great news for conservationists, but not so much for locals. In the city of Frankfurt an der Oder on the German-Polish border, for example, officials have been forced to block off parts of the botanical garden because the beavers have been burrowing under the pathways. Up to 100 beavers are believed to be living in the city.

"The beavers need to be pushed back into areas where they can't do any damage," says Karsten Birkholz, who heads an administrative office for six communities in the Oderbruch region and campaigns for the interests of their inhabitants. "The dike is the foundation of our existence," Birkholz adds. "If the levee doesn't hold, we are as good as gone."

If matters worsen, Birkholz continues, officials might be forced to respond to the animals with violence, for example by destroying their dams. And when asked if they would ever consider having the beavers shot, the local politician will only say: "If that is the only means we have left, we'd have to consider that as well."

Learning to Live with Beavers

Freude, though, takes a different view. Since beavers are nocturnal animals that are very skilled at hiding themselves from pursuers, Freude explains, "hunting beavers just doesn't work at all." Trapping them won't work either, he adds, because it would only invite beavers to cross over from Poland and occupy new habitats. On the Polish side of the Oder River, there are an estimated 27,000 beavers.

Fighting back these potential intruders was the reason why the beavers of the Oder River were voluntarily re-introduced into the area in the 1980s. Officials in what was then East Germany wanted to secure the ecological balance in the region by fighting off visits from rodents in neighboring Poland. Today, the strategy of the time appears a bit odd given the negative impact the beavers have had on the dikes in this flood-prone region.

As paradoxical as it might sound, Freude says, "the best protection against beavers is an occupied beaver habitat." As he sees it: "You can live with beavers; you just have to want to." In fact, his agency has published a brochure entitled "Living with Beavers" and directly implemented one of its important tips: In order to prevent beavers from penetrating the lower parts of the dikes, workers have begun burying mesh wire panels made out of galvanized steel in the embankments.

Such work is already underway in the small river community of Neuglietzen. A yellow backhoe about halfway up the embankment is digging fresh trenches for the steel panels. As Wartenberg explains, plans call for a total of 450 steel panels to be built into the dike here, covered back over with fresh dirt, sprinkled with grass seeds and -- voilà -- you have your beaver barrier. Conservationists are also promoting the idea of so-called "wildlife rescue hills," where beavers can find shelter, rather than in the dikes. Two have already been built.

Still, if these measures fail to stop the beavers from attacking the levees, Brandenburg's Environmental Agency plans to trap them during floods until water levels are back to normal. It has already procured modified dog kennels to serve as cages, if the need arises.

As chance would have it, Freude has already experienced the destructive power of the beaver. Many years ago, when the region still belonged to the former East Germany, the zoologist was on an outing with a group of students. Using a cassette recorder -- a treasure that was very hard to find on the open market -- the group managed to attract one of the shy animals. Lured by the sound of cascading water, the beaver swam to the recorder, grabbed it and buried it under a mound of branches -- damaging it beyond repair.