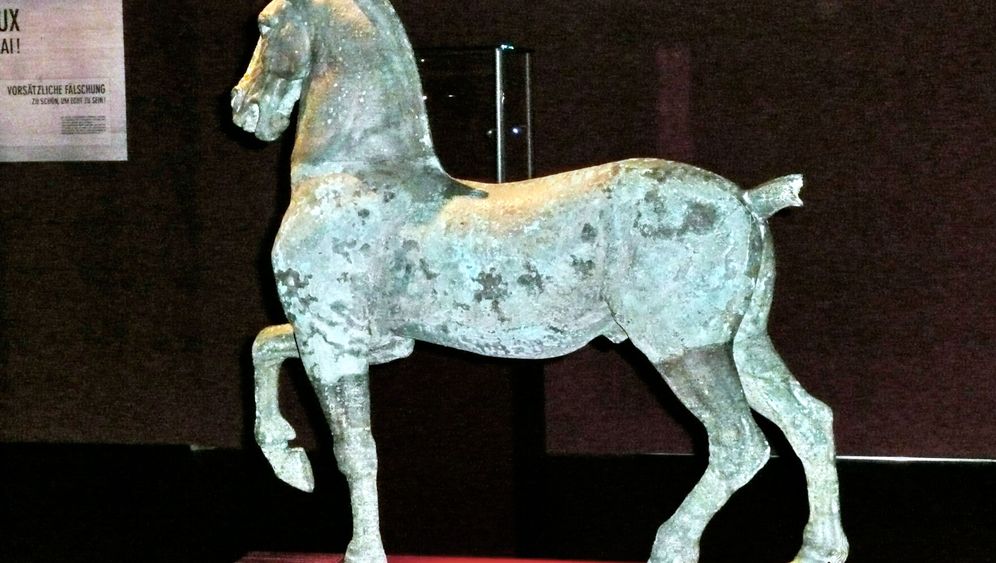 In 1563, the servants of Anton Waldbott von Bassenheim, a German imperial knight, went into his lavish vineyards to cultivate the vines. Suddenly one of the workers stumbled across a Roman gravesite. It contained coins and a black urn filled with bones. The urn itself wasn't enough for the nobleman, who had it embellished with a silver rim. Afterwards, he boasted that the urn was real.

Which it no longer was.

The urn is now part of an exhibition in the Swiss city of Neuchâtel that features astonishing forgeries from various periods of history. The show at the Laténium archeology museum includes busts of pharaohs produced in the winding alleys of Cairo, imitation Etruscan vases and gilded druid sickles, all made with the intention to deceive.

"L'âge du Faux" ("The Age of Forgeries") brings one into a shadowy world of criminal artists, dealers in stolen goods and scientists so filled with ambition that they quickly allowed themselves to be fooled.

This also applies to the people from the Quai Branly Museum in Paris, who purchased an Aztec skull made of rock crystal that was allegedly more than 500 years old. Unfortunately, as a recent study revealed, it was made with a milling machine. The piece probably came from the western German city of Idar-Oberstein, a key gem-processing center, where it was made around 1890.

A Long History of Deceit

But, as they say, mundus vult decipi -- the world wants to be deceived. Homo sapiens were already copying seashells some 35,000 years ago. A necklace from the Neolithic Age consists of 118 real deer teeth and 65 copies carved from bones.

The world can look back on a long tradition of art forgery. Fake versions of jewels supposedly owned by Helen of Troy made the rounds in ancient Greece. And a Neolithic hatchet, discovered by a Roman in antiquity, was interpreted as being "Jupiter's Lightning Beam."

In the modern era, forgers also set their sights on science. They made unicorn skulls, and in 1822 the citizens of London were able to admire a "mermaid." The exhibition in Neuchâtel includes a "dragon" -- composed of the shriveled remains of a ray.

The fact that such rubbish made its way into public collections has to do with the imperialist fever that shook the major powers at the end of the 19th century, as they competed with one another in a race to uncover the treasures of the past.

Forgers had an easy job of it, especially when their forgeries served national ambitions.

For example, in 1866 Napoleon III exhibited a fake vase from the Celtic age crowned with a Gallic rooster -- as if to suggest that the French heraldic animal had already been worshiped in Celtic times.

The British Museum, in turn, proudly announced the discovery of a skull that was believed to be at least 200,000 years old. Curators there claimed that this "Earliest Englishman" was the long-sought missing link between apes and humans.

In reality, a prankster had combined the lower jaw of an orangutan with the remains of modern skulls, and added the teeth of a chimpanzee before hiding it in a gravel pit near London.

The Jewish goldsmith Israel Rouchomowsky was a notorious forger. Around 1890, he began supplying the art world with coins and necklaces made to look old in his back-alley workshop in Odessa.

A gold helmet weighing more than 800 grams (1.75 pounds), which Rouchomowsky embellished with scenes from the Iliad and an inscription, is considered his best work. According to the inscription, the tiara was a gift from the Greek Black Sea colony of Olbia to the Scythian king Saitaphernes. The Louvre was so enthusiastic about the tiara that it bought it for a record price of 200,000 francs.

The bluff was discovered in 1903, triggering a wave of schadenfreude worldwide. Scholars in Berlin were particularly vocal in their derision of the Louvre -- which didn't protect them from falling prey to forgers soon afterwards, and from buying a fake wax bust of Leonardo da Vinci.

Hundreds of forged artifacts and works of art lie hidden in the cabinets of museums in Europe and the United States. The list of fakes is long, and in most cases curators have managed to conceal their embarrassing mistakes.

The most magnificent piece in the show, an allegedly 800-year-old bronze horse, had never been exhibited publicly before. According to the catalog, an archeologist serving as an expert witness in a legal dispute uncovered the forgery.

But the real story is different. A dramatic scene unfolded on the art market in 1980. "I received a call back then and drove to Lausanne," says Christoph Leon, an antique dealer in Basel, Switzerland. He met four Italians at an agreed meeting point who showed him the large bronze animal.

His impression, he says today, was that it was "a one-of-a-kind piece. The patina seemed real."

But stylistic features on the legs and mane of the horse made the art afficionado suspicious. In return for a deposit of 24,000 Swiss francs, Leon was permitted to take along a hoof that had broken off from the statue. He had the fragment analyzed in a Basel metal factory. "It was standard German bronze," says Leon.

A potential buyer from the Getty Museum in Malibu, California, who had already traveled to Switzerland with a lot of money in his wallet, was warned at the last minute that it was a forgery. Nevertheless, the gang, which had ties to the Mafia, was soon able to cash a check for $40 million it had received for the bronze horse at a bank in New York.

And although the four Italians were caught and sentenced to long prison terms, the money was never recovered. The horse's creator also disappeared.

"That's the way it usually goes," Leon says. "The number of forgeries on the art market is constantly increasing, while their nimble-fingered creators almost always remain in the dark."