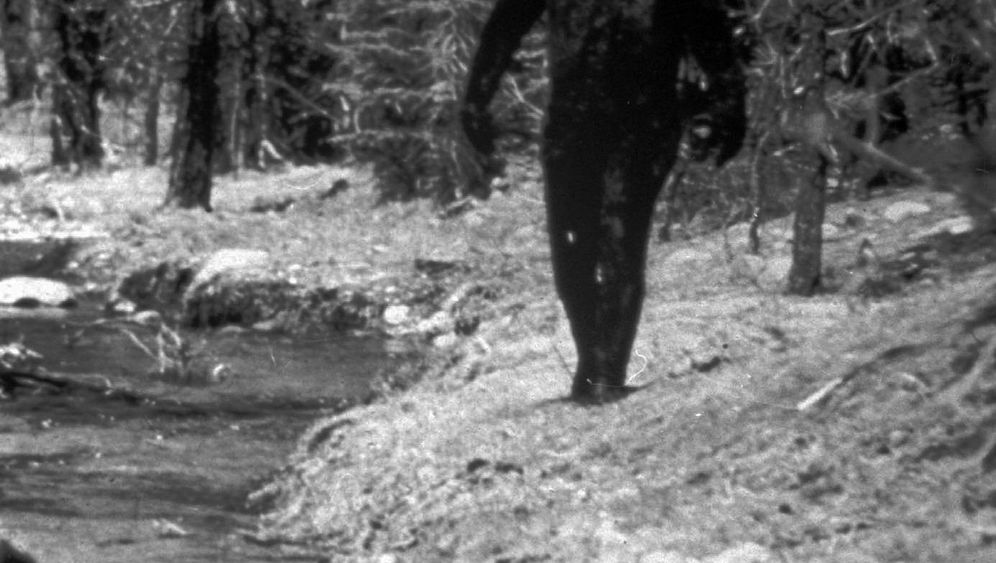 The plaintive howl echoes through the forest sounding like a muffled "whoop, whoop, whoop." Brandon Kiel pauses to listen in the dark, holding his breath for a moment before drawing air into his lungs.

Once again, Kiel cups his hands in front of his mouth and imitates the call: "whoop, whoop, whoop." The sound echoes back through the night, but all else is silence. Bigfoot isn't answering.

"The season is favorable," Kiel says, with a touch of disappointment. "But it's always possible that the animals are not in the area." The blueberries are ripe, and the calves of the Roosevelt elk, one of Bigfoot's favorite foods, haven't matured yet.

Kiel, 41, is a field researcher with the Bigfoot Field Researchers Organization (BFRO), a group based in the United States. The creature he is looking for is said to be clever, shy and stealthy -- an expert at camouflaging itself. But here in the redwood forests of northern California, Kiel is hoping he'll be blessed with hunter's luck. He and 20 fellow field researchers are on an expedition to track down Bigfoot.

Kiel calls the ominous creature "Squatch," short for "Sasquatch," a word in a Native American language that means "wild man of the woods". The shaggy, mythical creature -- half ape, half human -- is believed to be powerfully built, reach heights of up to 2.5 meters (over 8 feet) and weigh up to 230 kilograms (500 pounds), and it allegedly spends its time skulking through the forests of North America. So far, there is no real evidence of the existence of this alleged primate species. Indeed, human beings have never actually gotten their hands on a Sasquatch, either dead or alive.

Nevertheless, experienced "Squatchers" like Kiel are convinced that the animal exists. Even the Native Americans in the region had songs praising this mysterious miniature version of King Kong. Dozens of huge footprints have been found. Hundreds of eyewitnesses from the Canadian province of British Columbia all the way down to Florida -- including police officers, park rangers and professors -- claim to have laid eyes on the creature. The literature even mentions tufts of hair and a Bigfoot toenail found near the Grand Canyon.

"I am convinced that the Sasquatch exists," says British Columbia wildlife biologist John Bindernagel. For years, Bindernagel has put his academic reputation on the line by not only believing in Sasquatch, but also studying it. "I estimate the population of the animal to be several thousand at least," says Bindernagel, who has already written several books on Bigfoot.

Bindernagel also has a theory on how Bigfoot reached the American wilderness. He speculates that Gigantopithecus, an extinct genus of giant ape, once migrated from Asia across the same land bridge in what is now the Bering Strait that the first humans are believed to have crossed to reach North America.

Bigfoot is believed to be particularly prevalent in the area around the town of Klamath, in northern California, where a group of adventurous souls has gathered on this October day. Camouflage clothing is de rigueur, and the mood is euphoric. The most avid members of the group have studied the BFRO's expedition handbook, which informs readers to expect "type 1" inspections: a visit by "one or more" Bigfoots to the tent camp while everyone is sleeping, "most often between 2 a.m. and 5 a.m."

No one in the group questions whether the creature exists. Instead, they discuss its biology. The Squatch is "mainly nocturnal," Kiel says. It lives in groups and is "stinky, musky." Its diet includes "roots, slugs, frogs, deer, elk, fish, onions and berries." It literally licks its fingers after eating a meal of skunk cabbage.

Kiel has a round face with a vandyke beard, and he keeps his hair cropped short. When asked whether he has ever encountered the creature, he says: "Sure, just a couple of weeks ago."

In late July, he explains, the Squatchers gathered at Bluff Creek, less than 20 miles (32 kilometers) east across the mountains. "We had walked about a mile and a half, when someone suddenly said: 'There's a Sasquatch sitting by the side of the road,'" Kiel recounts. "I didn't believe him, so I asked: 'Is it a bear?' But he was adamant."

Kiel grabbed an infrared camera and peered through the viewfinder. "And, sure enough," he says, "there was the heat signature of a very large animal with its back to us, without a neck, with massively broad shoulders and a pointy head. You could see it from the waist up. I was totally flabbergasted." Kiel claims that the creature then turned around and looked at him twice. The intimate exchange of glances lasted about 15 minutes. Then Kiel, the expedition leader, decided to pull out. "I wanted to be respectful," he says.

The area around Bluff Creek is well known among Bigfoot aficionados. It was where, on Oct. 20, 1967, a legendary amateur film was shot depicting a massive, hairy beast strolling through a riverbed for a few seconds.

Film experts -- and even special-effects artists working for the Disney corporation -- have repeatedly scrutinized the blurred, grainy footage. But the evidence remains unclear. Is the creature a person in an ape suit or a world sensation of cryptozoology, the search for animals whose existence has yet to be proven? The man who shot the video, a rodeo rider named Roger Patterson, continued to insist that the film was authentic up until his death in 1972.

At the BFRO camp in California, at any rate, no one questions the authenticity of the Patterson video. In fact, almost everyone in the group claims to have already seen a Bigfoot at least once. "I was elk hunting", says Rey Lopez, a government employee who lives near Sacramento. "At first I thought it was another hunter, but then I realized that it was a Sasquatch with whitish hair."

We pile into Lopez's large pickup truck and drive out into the night. After a few miles, he stops the truck on a parking lot in the middle of the woods. The group uses headlamps with red lenses to avoid startling the beast. After a brief walkie-talkie test, everyone is ready to go out "Squatching," the nightly foray into Bigfoot territory.

We spend the next few hours whispering and stumbling through the same woods in which parts of Steven Spielberg's "Jurassic Park" were filmed. The undergrowth is wet, and the red light is barely strong enough to illuminate annoying roots poking out of the ground. Kiel, the expedition's leader, stops every once in a while and sends his "whoop" calls out into the night. Sometimes he also blows on a high-pitched whistle or hits trees with a large "Squatch knocker" -- in layman's terms, a branch -- hoping the hollow sound might attract Bigfoot.

Meanwhile, Robert Collier, who lives near Los Angeles, continues to observe everything with his night-vision goggles, which he proudly points out are "military grade." His eyes look green in the device's light.

The whole production has only one purpose: to somehow convince the woodland beast to communicate with the group. "Bigfoots have been known to answer us," says Kiel. "We experience time and again that rocks are thrown at us." He also points out that "wood-knocks," "whoops" and "screams" are regularly heard echoing from the undergrowth.

In fact, noisy audio recordings bear witness to the creature's supposed vocabulary, including sounds like blood-curdling screams and obscure-sounding jibberish. Particularly avid Squatchers say they've managed to make out bits of Russian and ancient Chinese in the audio soup.

Even some of the creature's genetic material is allegedly in circulation. Kiel claims that Melba Ketchum, a veterinarian based in Timpson, Texas, has analyzed dozens of hair samples, but that the results of her research have yet to be published. Nevertheless, there are rumors in the community that tissue from two dead Bigfoots is in refrigerated storage at Ketchum's laboratory.

Ketchum declines to comment, though, and the Squatchers have waited in vain for her to make an appearance at their annual Bigfoot conferences, which regularly attract several hundred attendees.

'A Good Excuse to Go Camping'

Does all of this sound crazy? Sure it does. And, yet, there are some questions that remain unanswered. For example, the 1992 discovery of a new bovine species, the Saola, in the jungles of Southeast Asia has given the Squatchers hope. The Saola lives in an area that is no less densely populated than many of the forested areas in the United States.

Couldn't it be possible that a shrewd giant ape has been hiding undiscovered in the forests of North America for centuries?

"It's a good excuse to go camping," says Bill Brewer, who harbors a healthy degree of skepticism despite being a BFRO member. Squatching, he says, also happens to be a lot of fun.

Perhaps this explains why these hikers in the northern California night seem undaunted in their enthusiasm, even though the woods remain stubbornly silent until the early morning hours. But at least that gives them a good reason to come back soon.

And it might also be that the Squatchers don't even want to find the mysterious, broad-shouldered creature after all.

"I like the romantic notion of our search, this wonderful gray area," Kiel says. If Bigfoot is actually discovered one day, he notes: "Then all of this will be over."