NOTE TO OUR READERS: Journalist Hajo Schumacher, who conducted this interview, and former politician Silvana Koch-Mehrin have known each other for many years. It is on the basis of this mutual trust that Koch-Mehrin responded to the questions that many of our readers found to be impertinent and unsettling. We apologize for not having been clear about their rapport from the very beginning.

DER SPIEGEL: Ms. Koch-Mehrin, you were diagnosed with breast cancer last fall. How are you doing today?

Koch-Mehrin: I'm doing well, thank you. I feel healthy. And the prognoses look good; it will likely stay that way.

DER SPIEGEL: What physical and psychological effects did your experience leave you with.

Koch-Mehrin: So much has changed that "leave" is the wrong word. Cancer diagnosis, mastectomy, chemo and radiation therapy: It is an existential experience. Very little is like it was before, both physically and psychologically. But it's not worse, just different.

DER SPIEGEL: Can you give us an example?

Koch-Mehrin: The side effects I experienced from chemo included a runny and bloody nose, my eyes would tear up and I had to constantly clear my throat. Picking up and holding small things became difficult and I experienced a loss of feeling in my fingertips. My hair, eyebrows and eyelashes fell out. "Before," I took those things, and the ability to do things, for granted. Now, I see it as a gift.

DER SPIEGEL: Describe the moment when you received your diagnosis.

Koch-Mehrin: I can precisely recall every detail - the vase on the table, the pictures and books on the shelf. I was in the United States for work and was sitting in a friend's office when my doctor called me: cancer. It was a shock because I felt so healthy. I thought it was just my normal annual checkup. Simply uttering the sentence "I have cancer" sounded to me like "I am dying." Still, even after the telephone call, I went to all of the meetings on my schedule. I was like a robot, which is probably a protective mechanism. The doctor's optimism helped me a great deal in getting over the shock. I can only urge all women, even if you're under 50, to please get screened regularly. The stage at which cancer is discovered makes a huge difference.

DER SPIEGEL: Is breast cancer more taboo than other varieties of cancer?

Koch-Mehrin: When people learn from somebody that he or she has cancer, they often fall silent. They don't know what to say. And how should they? "You'll be fine" sounds rather desperate and doesn't help the person who is sick. We live in a society that suppresses things: We still ignore illness and death far too often. Because of that, many women remain silent about their breast cancer diagnosis. On the one hand, they do so because they themselves are shaken up, but also because they want to spare others from having to talk about something they simply can't talk about.

DER SPIEGEL: You were long seen as a kind of superwoman during your political career with the liberal Free Democrats (FDP), combining career and family, with never a hair out of place. You were also fond of playing that role. How has breast cancer changed your feeling of femininity?

Koch-Mehrin: Do I hear the male perspective seeping through? Long hair on the head and no hair on the legs? Only a woman if you have breasts? That's nonsense. Take a look at the self-confident women at #goingflat or #onebreastpride. That is a kind of femininity that has nothing to do with conventions. I admire it.

DER SPIEGEL: You haven't given an interview for nine years. Are you considering a return to politics?

Koch-Mehrin: If I wanted to return to politics, I certainly wouldn't do so with an interview. My focus is elsewhere entirely. I decided to do this interview to address the silence surrounding cancer and to encourage openness in dealing with serious illnesses.

DER SPIEGEL: What did you find particularly helpful during the most difficult times?

Koch-Mehrin: I was overwhelmed by the readiness to help, the warmth and the empathy I experienced from family and friends, but also from people whom I hardly knew. My husband and brother shaved their hair off in solidarity. Particularly in moments of despondence, I found it encouraging to hear about how open other women were about their illness.

DER SPIEGEL: How great is the danger of remission?

Koch-Mehrin: There isn't a single day when I don't think of cancer. The statistical improbability of remission is certainly reassuring, but every checkup sets me off on an emotional rollercoaster.

DER SPIEGEL: How did you tell your daughters about your diagnosis?

Koch-Mehrin: I was open and honest with them because I wanted them to continue trusting me.

DER SPIEGEL: What were the most difficult moments?

"I wanted to be strong for my children."

Koch-Mehrin: The first and last chemotherapy sessions were extremely challenging. At the first one, I was so afraid of the side effects that I almost went crazy. By the last session, my mental strength was almost completely used up. I didn't want to do it anymore. I was only able to make it through because I wanted to be strong for my children.

DER SPIEGEL: What aspects of the experience did you underestimate?

Koch-Mehrin: That it is a marathon. The treatment goes on for so long, it was almost nine months for me, and it is difficult. And afterwards, it still isn't over. A small example: fingernails take months to grow back normally. And I will be facing regular follow-up appointments for the next 10 years. Plus, some side effects are permanent.

DER SPIEGEL: What were the most important lessons you learned?

Koch-Mehrin: For the first time in my life, I really became acquainted with fear. And I had to learn how to deal with it. It's easy for me to say, but it's not easy to do.

DER SPIEGEL: Whether you wanted to or not, you fulfilled the classic stereotypes of the blond during your political career. What was it like to be bald and have to wear a wig?

Koch-Mehrin: I missed these kinds of questions so much …

DER SPIEGEL: … it is my pleasure.

Koch-Mehrin: Promoting clichés is apparently still part of the standard repertoire of journalism. The virologist Sandra Ciesek is a token woman at the side of Christian Drosten, of course. In the Reykjavik Index, which measures the influence stereotypes have on opinions, Germany doesn't do particularly well. Such questions, which subconsciously strengthen prejudices, contribute to that.

DER SPIEGEL: Fine, but you were pretty good at the blond game. You knew very well that in a male-dominated party such as the FDP, you got a lot of attention and that you wouldn't have risen through the ranks so quickly if you had been a man. That is exactly why those who were envious of you abandoned you in 2011 and were happy to see you fall. Did your illness change any of your political positions?

Koch-Mehrin: Everyone should have access to first-class health care, irrespective of how much money they have. COVID-19 has made us all realize how vulnerable we are.

Koch-Mehrin: Take a look at what (Free Democrat) Daniel Bahr proposed back when he was health minister: a legally mandated health-care system rooted in liberalism. It was an intelligent and affordable program that put the focus on the patient.

DER SPIEGEL: Do you miss the FDP?

Koch-Mehrin: Some fellow party members became real friends of mine, and I've stayed in touch with a lot of them, even if most are no longer active in politics. I am still convinced that Germany needs a strong liberal party. But I am no longer engaged in party politics. Today, I work with and for women politicians around the world in a strictly non-partisan manner. I am head of Women Political Leaders, a foundation which aims at increasing both the number and the influence of women in politics.

DER SPIEGEL: Will you vote for the FDP in the general election next year?

Koch-Mehrin: I will always vote for a liberal party.

DER SPIEGEL: Many cancer patients look for reasons why they fell ill, whether it be stress or an unhealthy lifestyle. What explanation did you come up with?

"The most important thing is that the women in question feel good about the decision they make, and not whether others like it or not."

Koch-Mehrin: It is pretty much impossible to not search for potential causes. There have been huge advances in treatments and cures for breast cancer, but the "why" question has never been adequately answered. The pill is a blessing, because it provides women with self-determination. But I'm not the only one furious at the fact that even 50 years after the pill's introduction, hormones are the focus of contraception, even though the correlation with breast cancer is clear and proven. The focus must be more squarely on women's health.

DER SPIEGEL: The Reykjavik Global Forum, which is organized by your foundation every year, recognizes initiatives that are important for women. This year, the prize has been awarded to the pink ribbon, the symbol for the fight against breast cancer. Why?

Koch-Mehrin: The pink ribbon, which was introduced exactly 30 years ago, is now a global symbol of the fight against breast cancer. Because women - and now also men – have joined together around the world for the fight, it has been a huge success story. Many women are now able to survive breast cancer because it has been possible to destigmatize the illness, collect donations, finance research and improve treatments. That is what we are recognizing. Prize recipients are the American Nancy Brinker, the first to use the pink ribbon back in the 1990s, and Vigdís Finnbogadóttir of Iceland, a breast cancer survivor and activist in addition to being the first female head of state in the world.

DER SPIEGEL: The Berlin-based music journalist Anja Caspary is extremely open about her double mastectomy, not shying away from wearing tight tops in public, which confuses some. What do you think about her confrontational strategy?

Koch-Mehrin: I think it's great. And why should it be devalued by labelling it confrontational? Breast cancer is the most common illness contracted by women. We must allow it to be an informed and personal decision whether a woman wants to get implantations, with all the side effects associated with that route. The most important thing is that the women in question feels good about the decision they make, and not whether others like it or not.

DER SPIEGEL: Did you really never think during this phase about how you would be perceived by men?

Koch-Mehrin: The focus should always be primarily on the woman herself and what she wants. In a diagnostic telephone call with my doctor at the time, I was told unprompted that "after a reconstruction, you can feel like a woman again." I never went back to him. I will only go to a doctor for an operation, treatment and follow-up care if they respect my priorities. I would like to decide on my own how I see myself as a woman. 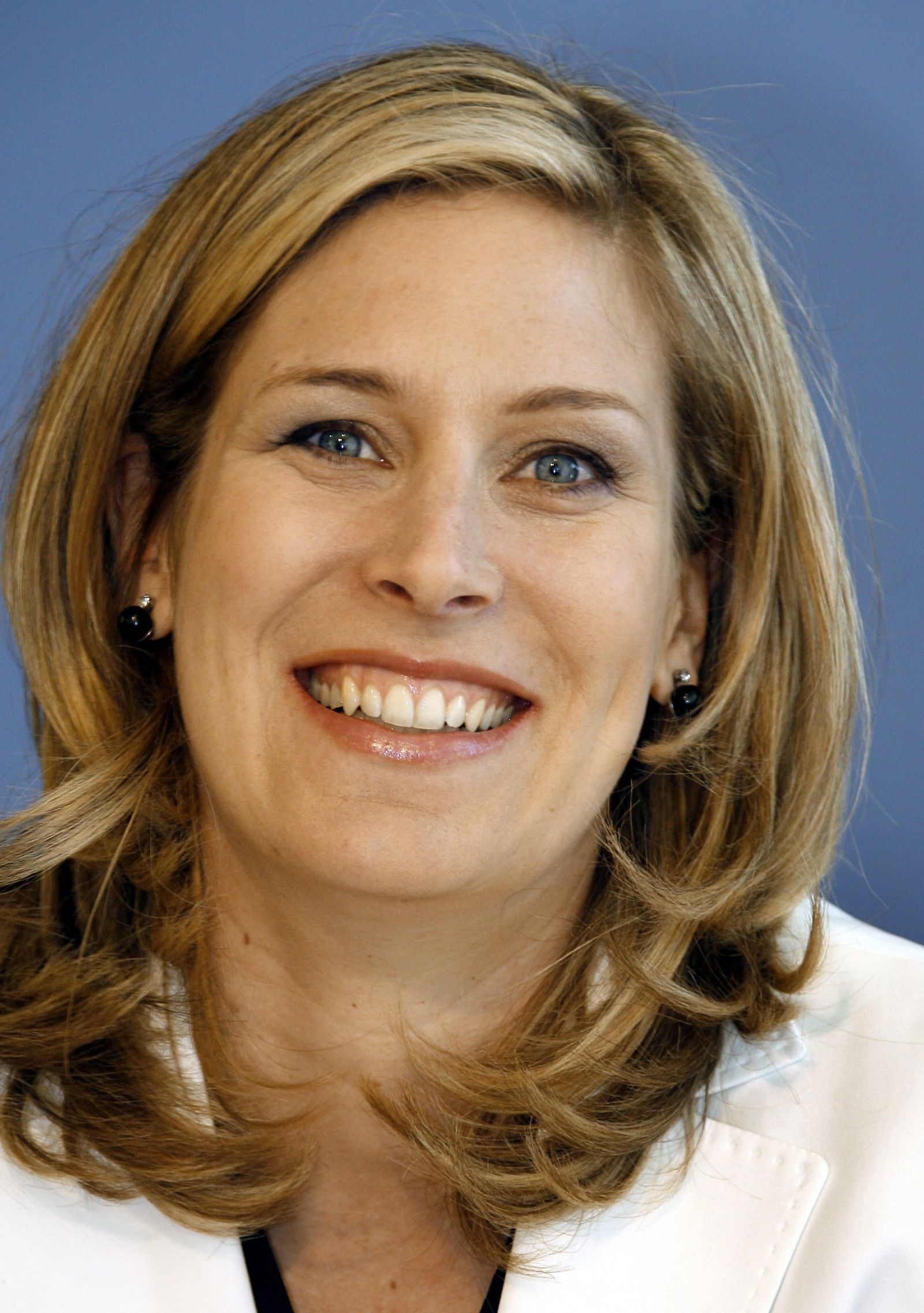