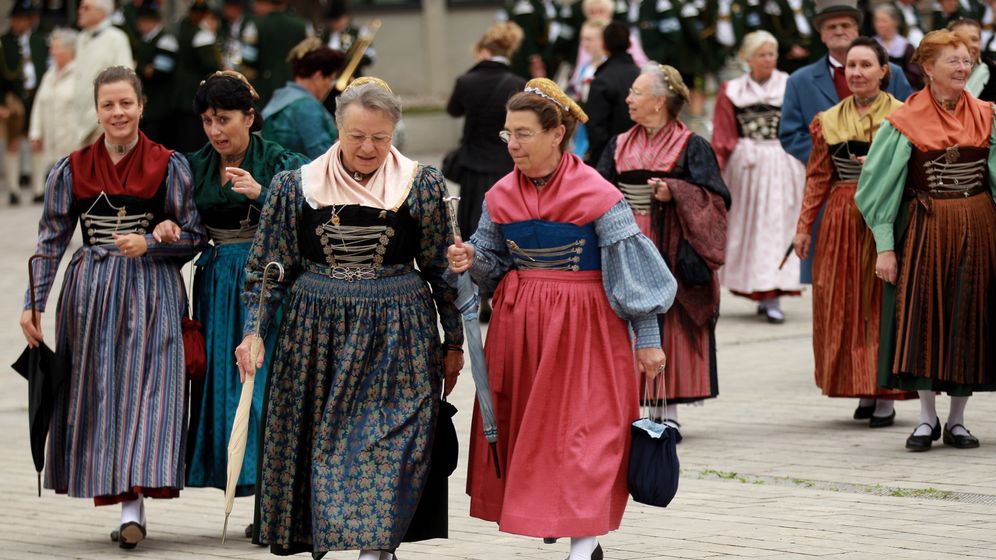 Photo Gallery: A Revival of Dirndls and Lederhosen

It's been madness on the streets of Munich in the past few weeks as Bavarians flocked to stores to find the perfect get up for Oktober fest, which opened on Saturday. For a number of stores, the sheer demand has been almost more than they can handle. This year, Oktoberfest is celebrating its 200th anniversary, and revellers are determined to parade across the fields in the finest traditional folk costumes, known as Tracht in German. In other words, its a sea of dirndls and lederhosen, as far as the eye can see.

But it is not only the residents of Munich, where the Oktoberfest is held annually, who are buying the Bavarian finery. What was once the domain of dyed in the wool Bavarians is increasingly catching on with other Germans. Around the time of Oktoberfest, clothing stores throughout Germany offer a selection of lederhosen and dirndls -- and sales have been increasing each year.

The increasing popularity of traditional folk costumes across Germany has become the subject for academic research. Simone Egger, an ethnologist at the Ludwig Maximilian University in Munich, has been studying the issue for several years. She has watched dirndl and lederhosen grow from regional fashion to a mass-market phenomenon.

According to Egger, the trend began around 10 years ago. Suddenly Lodenjanker -- the traditional woolen jacket worn by men in the countryside -- and lederhosen could be found hanging in Munich's second-hand stores. Young Bavarians seemed to be rediscovering a taste for the traditional clothing.

Munich designer Lola Paltinger was quick to catch on to the trend and produced pricey, modern creations that made the dirndl into even more of a fashionable item. The new versions of the dirndl were wilder and more luxurious, and, above all, they were shorter. Today the so-called "mini-dirndl" is a best seller.

That's probably not surprising though: The shortened folk dresses have had a lot of celebrity endorsement. At fashion shows, such as one held at Munich's exclusive nightclub P1, young women prance around in the short, brightly colored dirndls or show off popular dirndl-style lingerie.

Celebrities like Paris Hilton and actress Salma Hayek have been seen in the traditional Bavarian styles. Lederhosen, too, have been endorsed by the stars. Successful local pop group LaBrassBanda, who originate from Chiemsee in Bavaria, wear the leather pants in their performances throughout Germany.

Egger is certain that this sort of thing would not be happening without something more behind it. On the one hand, various celebrity sightings have supported the trend. On the other, though, the community spirit that wearing folk costume engenders, should not be underestimated either.

"When one wears folk costumes, one is identifying with a city or a region, or with one's circle of friends," Egger explains. "You show that you're a member of a certain group."

At the same time local designers are trying to outdo one another with extravagant new versions of the folk costume so that there's something for everyone. "What was something special at the beginning of this wave of popularity for folk costume has, in the meantime, become standard," Egger says.

New, smaller labels are also now specializing in the traditional clothing, like Munich-based Kaisergwand. Owner Peter Kaiser has had inquiries from throughout Germany. "Tracht is just booming," he enthuses. "If you're wearing lederhosen or a dirndl then you are always well dressed -- they have become a fashion must-have."

The owner of the store Angermaier in Munich, Axel Munz, is also pleased that the clothing is enjoying more appreciation outside of Bavaria. Munz offered soccer-themed dirndls during the World Cup and he is also about to release lederhosen for the ladies -- in bright red, green, blue or purple. Most important to him though, is that wearing the folk costumes fosters a feeling of togetherness.

In fact, demand for the traditional dress has grown so much that discounters and chain stores have also gotten in on the act. They offer a less expensive alternative to those more exclusive designer pieces. This, in turn, has fueled greater demand for dirndl and lederhosen in regions where they are most likely to be worn at theme parties.

"Over the past few years, there has been an increased demand in Berlin, Cologne and Hamburg because there have been special Oktoberfest-themed parties taking place, where there is a dress code," says Julia Ley, a spokeswoman for the German division of multinational fashion retailer C&A.

There is also a current trend in exporting smaller Oktoberfests all over Germany. Germany. Those living along the Rhine River are particularly fond of the Bavarian festival tradition, but calls are even increasing in northern Germany to "party like the Bavarians."

A permanent media presence at the real Oktoberfest is partially responsible for awakening such interest in other parts of the country. For non-Bavarians Oktoberfest is more about partying together than the culture of the Bavarian state capital.

Frank Klüter, one of the organizers of the version of the Oktoberfest in the Wandsbek area in Hamburg compares the beer festival to what Germans know as a "Schlager party," an event celebrating the German brand of pop folk music. Just as one would throw on 1970s drag for that kind of event, one dresses up in folk costumes for the imitation Oktoberfests. A lot of people actually rent their outfits from costume shops, Klüter notes.

Whether it is community spirited or not, Egger cannot completely explain the delight that Germans are taking in their Oktoberfest outfits. It could well have something to do with the way they feel about Munich. "Today, it is important to people that regions and cities distinguish themselves with certain distinctive characteristics," she suggests. "Munich has the upper hand there."

Former residents of Munich also play a role in the spread of the culture by taking their customs with them to their new homes. At the same time, the large number of people who migrate to Munich from within Germany means that people from all pats of the country and the world come into contact with the traditional garb.

For some clothing retailers, the new popularity of the folk costume is of concern -- despite the fact that it is good for business. Claus Hammerschmid, whose eponymous family business based in Marquartstein in southeastern Bavaria, has been in operation since 1951, worries about the market being flooded by cheap versions of the folk costumes.

"At some stage the market will be saturated. Then there could be a problem for those people who make a living exclusively from folk costumes," Hammerschmid says. He sees the increase in sales clearly as a fashion trend. "At the moment we are at the high point of this boom," he says. "But for many, these clothes are just a sort of costume. That is why I believe that this wave of success will slowly ebb, too."

The results of Egger's research could help ease Hammerschmid's mind: For the time being, she doesn't see any end to the popularity of the folk costume. The new, more exciting varieties of lederhosen and dirndls are more than just fashion, they are an evolution. And the rediscovery of the traditional style is important in order to pique the interest of a younger generation, she says.

But Egger does accept that this sales boom could be over in a couple of years time. Although the ethnologist cannot be completely certain as to why there is so much hype around Bavarian folk costume at the moment, she does know this: "A style usually goes away after a couple of years," she says. "There has to be more behind this than just a trend."

13 Bilder Photo Gallery: A Revival of Dirndls and Lederhosen