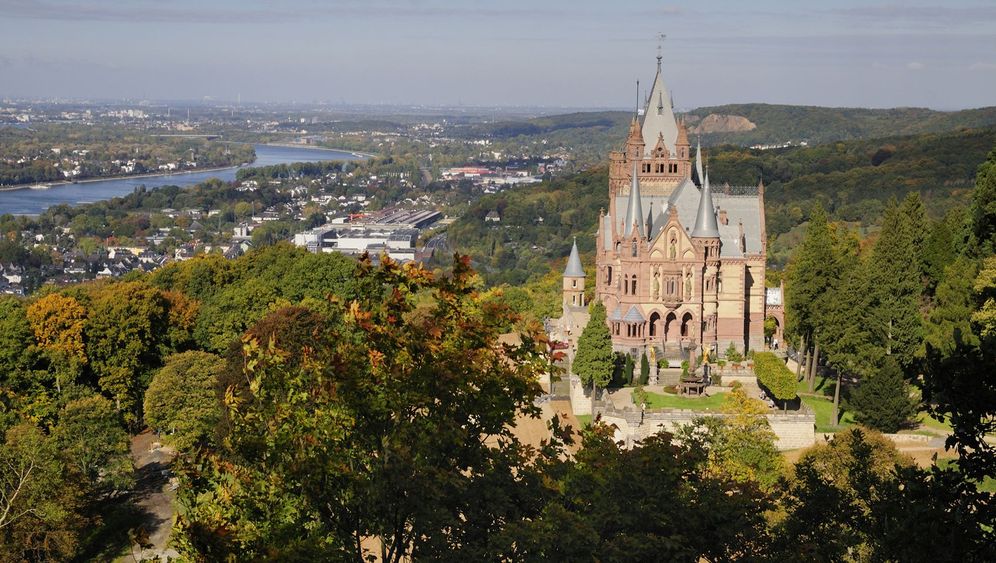 With its dreamy spires, mock battlements and square clock tower, Schloss Drachenburg palace, which stands on a wooded hill high above the Rhine River near the sleepy town of Königswinter, looks like a cross between a medieval castle, a Gothic cathedral and Big Ben.

According to German folklore, Siegfried slayed a dragon just a little further up the mountain. But the story of this spectacular building, a jumble of architectural styles erected in less than three years in the late 19th century by a wealthy stockbroker, is strange enough to become legend in itself.

The state of North Rhine-Westphalia has just completed a €31.5 million ($44 million), 15-year restoration, part of a broad investment drive to attract visitors to the Rhine region, one of Europe's most beautiful areas, by sprucing up its sights. Drachenburg means "Dragon's Castle," and its fairy tale appearance would make it a worthy location for a Harry Potter film.

Over the years, eccentrics have used the building as a canvas for their grand visions. In 1910, one entrepreneur planned to convert it into a tourist resort complete with a landing area for Zeppelin airships and a concert hall to rival the Bayreuth Wagner opera festival.

In the 1970s, one owner used it for sumptuous parties during which he dressed in an admiral's costume and treated guests to concerts he gave on a fake organ, with music played from a hidden tape recorder. He would impress tourists by filling the palace with historical artefacts of questionable authenticity, including a sculpture he claimed was by Michelangelo and a garish chair he said was the throne of French king Louis XIV.

"Those items were all fake. We have kept some of the more entertaining ones. It's all part of the charm of this place," Joachim Odenthal, the castle's manager, told SPIEGEL ONLINE.

Not much about Schloss Drachenburg is genuine. But Odenthal said the government decided to purchase and save it because of mounting appreciation for "historicism," a 19th century trend that replicated various architectural styles to create idealized historical buildings.

Across Europe, castles were refurbished or newly built to satisfy a yearning for a medieval idyll of nature, romance and knights in shining armor to counter the grey reality of a rapidly industrializing world.

"People wanted to return to the good old days and it's no different today," said Odenthal, who expects the Drachenburg will attract 120,000 visitors a year starting in 2011. The entire interior of the castle was reopened in July.

A world-famous example of historicism in Germany is Neuschwanstein Palace in the Bavarian Alps, built in the 1870s by "mad" King Ludwig II. It is said to have inspired Disneyland's Sleeping Beauty Castle, although Odenthal is not so sure.

"Sometimes I think one should ask whether Disney copied from us," he said with a grin. "Besides, our castle is far more interesting than Neuschwanstein. That one just has the one view. Ours changes as you walk around it. From seven different perspectives you've got seven different buildings."

By the time North Rhine-Westphalia bought the palace in 1989, the vagaries of German history had left it in ruins. Completed in 1884, it started out as a private villa but soon became a museum, then a Catholic boarding school, an "Adolf Hitler" college for boys, a US army base, a home for war refugees, a railway college, an illicit squat for homeless people and a tacky museum.

Its facade is still scarred by shrapnel holes from US artillery fire that smashed all the stained glass windows in the final weeks of the war, before the Nazi schoolboys inside wisely decided to stop resisting.

Historians had been wrong to dismiss the palace as devoid of artistic or architectural merit, said Odenthal. "This is a trove of German art and craftsmanship. We were really excited by the skill that went into building it in just three years at a time when all the material had to be hauled up the hill on wagons and donkeys."

Odenthal's team brought in artisans from all over Germany to recreate the original tapestries, wall paintings and windows, often using vintage postcards from 1903 as a guide. "We scoured auctions for furniture from the turn of the 20th century," said Odenthal. "Luckily, many items from that era aren't particularly expensive."

The financier who had the castle built, Stephan Sarter, the son of a pub landlord from Bonn across the river, made his fortune helping to arrange the financing for the Suez Canal. One of the wall paintings features him as a medieval knight on horseback.

Local Tycoon Rides to the Rescue

The Drachenburg stood empty during the 1960s and became so dilapidated that the regional government planned to tear it down. It was saved by fierce protests from local people and by the intervention of a textile merchant named Paul Spinat, who bought the Drachenburg in 1971 and decided to restore it.

Spinat, the son of a postman from the town of Bad Godesberg just across the river, opened the castle as a museum and venue for glittering pseudo-aristocratic balls. He made some questionable stylistic changes such as fitting the fake organ, adding plastic balustrades painted to look like marble and building a large swimming pool in front of the palace.

"Paul Spinat would drive around in his golden Rolls Royce collecting curiosities for his palace," said Odenthal. "He hired anyone who could hold a brush to help restore the wall paintings, and some of them have a faintly comic book style as a result." The work of one local art student, Peter Tutzauer, can still be admired in the Great Hall. He seems to have been at the very start of his training.

Among the "original" exhibits Spinat procured were masterpieces he insisted were by Velasquez, van Dyck and Titian. A grand wooden bed which probably came from an auction of second-hand theater props was said by tour guides to be "the bed where Marie-Antoinette is believed to have slept."

A Visit by Andy Warhol

The more gullible visitors believed the claims and went away satisfied that they had just seen an impressive exhibition. The canny businessman helped to fund the upkeep with schemes such as collecting donations for an organ repair fund. "There is no denying he was often on the make," said Odenthal.

Among Spinat's more bizarre acquisitions was a set of cast iron steps he fitted in the middle of the Great Hall. "It led nowhere but during receptions he would stand at the top of them behind a curtain and make his grand entrance when everyone had arrived. That meant he would sometimes spend half an hour or more up there waiting," said Odenthal. Andy Warhol, the American artist, came to one of Spinat's parties.

The Drachenburg's restoration is an ode to the skill of its original builders and artisans but also to a romantic fascination with the past, and not least to the fakery of Spinat, who died in 1989.

"We're going to buy his Rolls-Royce and place it in front of the castle," Odenthal said. "We've already got his death mask. But I'd rather have his toupee."