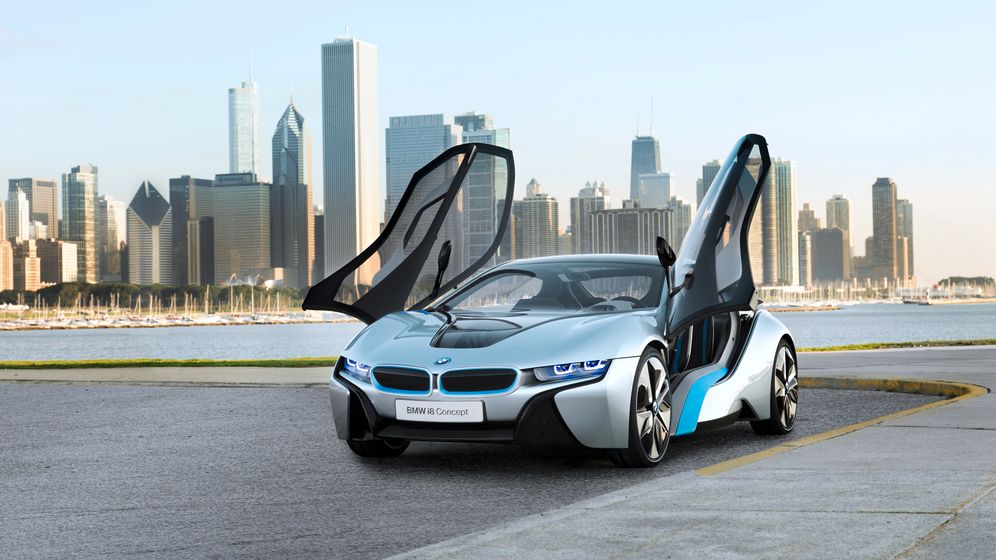 There will be a new type of racing car soon. It's supposed to look something like a Formula 1 car and drive just as fast -- but with an engine that makes no noise.

The International Automobile Federation (FIA) has announced that a new racing championship series is being developed for the circuit that could ideologically decontaminate the racing world. The plan envisions having automobiles with 700 horsepower electric engines zooming about with absolutely no emissions. 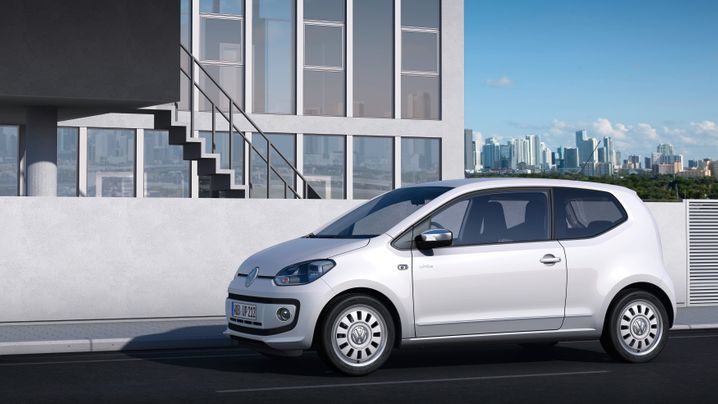 Photo Gallery: Cars of the Future Unveiled at Frankfurt Show

The vision of a green Grand Prix is exactly the kind of message that the 64th International Motor Show (IAA) wants to send. The show, which kicks off this Thursday in Frankfurt, is the industry's premier trade fair, held in the land where the revolution of motorized vehicles once made legends out of names like Daimler and Benz.

With this pedigree, the IAA is meant to provide an overview both of where things are and where they're going. And the direction has rarely seemed so clear-cut: The German government and the domestic automotive industry are both set on transforming Germany into the "lead market for electromobility."

To get closer to this goal, they did something typically German: They set up a committee. Mostly made up of executives and politicians, it is called the National Platform for Electric Mobility (NPE). One of its leading members is a business veteran and auto industry outsider who unfailingly exudes optimism. Henning Kagermann, a former CEO of the German software giant SAP, views the world of transport as facing a "paradigm change." His mission is to get one million electric vehicles on German streets by 2020.

Still, when the IT expert enters Hall 4 of the IAA, it might quickly dawn on him that things take much longer to evolve on the real highway than on the information one. For the first time in IAA history, an entire 20,000-square-meter (5-acre) area will be devoted to electric mobility. Matthias Wissmann, the president of the German Association of the Automotive Industry (VDA), says this "Hall of Electric Mobility" will provide visitors with a "unique overview of this form of propulsion."

But the hall will also highlight the slow the pace of development for this type of drive system. It will still take years for the technology to become viable for the mass market.

"To me, this electric hype is inexplicable," Fritz Indra, a doyen in vehicle development, recently told the trade magazine Automobil Industrie. The honorary professor at Vienna University of Technology and former head engine developer at Opel and General Motors still sees a good deal of "open questions" -- and no satisfying answers.

The first electric cars that aren't DIY projects and offer acceptable crash protection have arrived in the dealerships. Most of them are no-frills mini-vehicles that cost as much as a mid-sized sedans and can only take you a short distance and back on a single battery charge if you're lucky enough to avoid heavy traffic. Of course, that's not the case in the winter, when energy-sapping interior heating significantly diminishes its range. And if it runs out of juice on the road, no jerry can will help. Your only option is to call a tow truck.

With all the drawbacks of this type of car, you have to be a true believer in electric mobility to imagine that there really are one million people out there who want to have one.

Rudolf Krebs draws a pentagon as he sits in his office in Wolfsburg, home to the headquarters of Volkswagen. The 54-year-old is convinced that his background as a trained electrician and holder of a Ph.D. in mechanical engineering makes him particularly qualified for his new assignment.

Krebs leads the team at Volkswagen responsible for developing electric drive systems. Europe's largest carmaker won't have an electric car on the market until 2013. The miniature "Up!" car already on display at the IAA is a version outfitted with a combustion engine.

"In this case, we don't have a problem not being the very first," Krebs says. "It doesn't make sense to prematurely put a car on the market that doesn't offer any convincing benefit in terms of its usefulness."

Krebs writes a different term at each corner of his pentagon: energy content, performance, costs, safety and life span. Developers are trapped in this structure, he explains. An improvement in one aspect comes at the cost of another. If performance or energy content increases, life span decreases. Offering more range means a bigger price tag. Indeed, as he sees it, the greatest challenge is designing an electric car that hits the sweet spot where the levels of all these aspects are acceptable.

It's already been four years since advances in lithium battery technology electrified the auto industry and convinced more and more people that the future of the automobile was in electricity rather than biodiesel or hydrogen. In the wake of these advances came development projects and billions in investments that have been transforming conviction into certainty that the era of the electric car will really dawn -- though certainly not as quickly as the German government would like.

The pace of development is set by the manufacturers of batteries. The question of how quickly battery-powered automobiles will be able to transport things in both a convincing and affordable way will be decided by the chemical interplay between the light metal lithium and some yet-to-be-determined substance. The leading firms in the battery field, most of which are based in Japan and South Korea, are placing their bets for this other substance on nickel, manganese and cobalt.

A battery made of these elements that can hold a kilowatt hour of energy currently costs about €400 ($545) and weighs about 10 kilograms (22 pounds). Though that's already considerably better than where things stood just a few years, it's still far from being good enough.

Krebs believes an electric car will have to be able to reliably travel more than 100 kilometers (62 miles) even under unfavorable conditions, such as rain, cold weather or extreme heat. To do so, it would have to have at least 25 kilowatt hours of power. That would require a battery that weighs somewhere in the range of 250 kilograms and costs €10,000 -- in other words, almost as much as a complete small car with a conventional drive system.

Developers currently predict that, over the next decade, battery capacity will double while production costs will be halved. But, even so, the electric car would be nowhere near as inexpensive and flexible as a conventional car.

"In the foreseeable future," Krebs says, "you can forget about electric drives for long-distance use."

Still, an entirely new era could begin if battery manufacturers try their luck with a new combination of lithium and air. Doing so would allow energy-storage devices to embrace one of the advantages of traditional combustion engines: The batteries would get the oxygen they need out of the atmosphere, thereby cutting down on the vehicle's weight. Researchers believe it's possible to reduce energy density to one kilowatt hour per kilogram. If batteries reached this efficiency level but weighed the same as they do now, the range of the electric car would climb to 1,000 kilometers, thereby meeting the prerequisite for an electric car suited for traveling long distances.

However, this technology is still in the research phase. Indeed, it might not be until well past 2020, if ever, that these kinds of batteries are sufficiently reliable and long-lasting to be suitable for use in cars. Until then, a fully satisfying car powered solely by electricity will remain little more than a dream.

One compromise solution that seems plausible is hybrid drives, in other words, crossbreeds that have both types of drive systems. Together with General Motors, its parent company, Opel has developed the most spectacular example of this species so far. The Opel Ampera, which will become available on the European market this autumn, can travel roughly 60 kilometers (37 miles) on battery power. The driver doesn't need to worry about the batteries running down because the gasoline engine takes over when the car runs out of electricity.

The logic behind this concept is convincing: The Ampera can handle most everyday journeys with electric power while retaining the autonomy of a full-fledged car. But there might be one stumbling block: the price tag. The car will cost €42,900 ($58,500), quite a lot for an Opel.

Renault Fails to Live Up to Its Own Hype

The principle will be imitated by the more prestigious car brands. Many carmakers -- including Daimler, BMW and Audi -- already have comparable vehicles under development and expressed much respect for Opel's advances.

At the same time, the entire sector is puzzled by the offensive of the Renault-Nissan alliance. In early 2008, CEO Carlos Ghosn announced that the alliance would become the market leader in electric autos and begin to "mass-market" them in 2011.

This was followed by all sorts of baffling events. Ghosn fired several leading executives based on suspicions of industrial espionage that later proved unfounded. Then there was a big dispute over a battery plant that was supposed to be built in the French town of Flins but now won't be able to start production until 2014 at the earliest, two years behind schedule.

2011 was supposed to be year of Renault's major offensive. But so far the only thing the company has to offer is a flashy website devoted to electric cars. The site has links to Facebook and Twitter and a short video in which someone playing an instructor dressed in a white lab coat tries to dispel the "myths" about battery capacities and ranges while using incorrect scientific terms (such as "kilowatt per hour" instead of "kilowatt hour") and divining that the Renault Fluence Z.E. will be able to drive 185 kilometers on a single charge.

The car that is supposed to keep this promise looks like the makeshift conversion of an ordinary sedan. The battery is housed vertically behind the back seats and can store 22 kilowatt hours of energy. It is only expected to have a range of 100 kilometers at best.

For the time being, Renault's only contribution to electric mobility is a car that costs a lot but can do little. The electric version of the Fluence is expected to have a sticker price of €26,180 -- but that's without the battery, which will remain the manufacturer's property and will be leased to the car owner for €79 a month. Consumers can already get their hands on a version of the Fluence that comes with a combustion engine for almost €8,000 less -- including a gas tank.

This product will not clear the way to the mass-marketing Ghosn proclaimed, but there might be some comfort in the fact that, when it comes to the environment, its arrival isn't really all that urgent. Environmental analysts already determined a while back that an electric vehicle that gets its power from Germany's current energy mix does only slightly less damage than a conventional car with good mileage.

Indeed, everything seems to suggest that we should still give the electric drive system a few more decades to mature instead of proclaiming a breakthrough that can't come so quickly.

Even the idea of the Electric Grand Prix floated by the FIA would hardly be a good advertisement for this new type of drive system. In fact, it would only illustrate its weaknesses, because the race would only last 15 minutes. The batteries wouldn't last any longer than that.