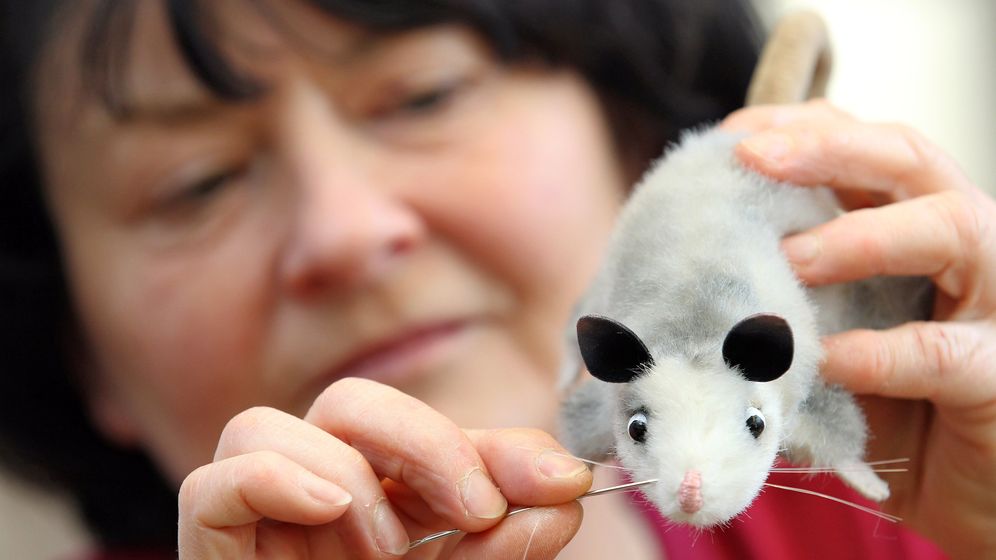 She won't be visible to the public until July, but a cross-eyed opossum has turned into Germany's new media darling. Two-and-a-half-year-old Heidi has even inspired a YouTube hit, her own high-end stuffed animal, and has more than 49,000 friends on Facebook, and counting.

"It really is surprising how famous and loved she is -- I guess it has to do with being cross-eyed," said Dr. Helmut Schache, of the toy manufacturer Kösen, whose hand-made stuffed Heidis will be available for order in two weeks.

The Heidi rage started in mid-December, when journalists from the German tabloid Bild went to the zoo in the eastern city of Leipzig to photograph animals that will be housed in the zoo's upcoming "Gondwanaland," a tropical center based on the regions of the ancient continent.

Once those photos became public, they turned the nocturnal marsupial into an overnight sensation. Leipzig Zoo officials, who say that the enthusiam was "surprising and unplanned," have had to put up a new page on their website answering questions about Heidi in an effort to ward off the unexpected media barrage.

Stefan Langner, a composer and musician in a wedding and party band called "90 Degrees," was immediately inspired. "We saw Heidi on TV, and we were so charmed, that we had to write a song about it," Langner said. Langner collaborated with fellow band member Gitta Lüdicke in writing the song, which he says was completed in two days.

'Heidi Is So Sweet. How Nice That She Exists'

They then found three young girls, ages 4, 8, and 13, who had experience singing in a local youth club in the Harz Mountains, to record the piece, named "Opossum Heidi Schielt," or "Opossum Heidi Peers."

"When we asked their parents if they would be interested [in making the recording] they were very excited," Langner, 51, said.

The girls, at times their voices altered and sounding like German "Chipettes," sing: "Heidi is so sweet. How nice that she exists. I fell so in love with her from the first."

Langner, who once wrote a song called "Hello Knut, little Polar Bear," about Berlin's most famous zoo animal, said the Heidi recording had almost 6,000 clicks within its first three days on YouTube, and has had about 13,000 clicks to date.

Meanwhile, Schache and his family-owned stuffed-animal business have developed a prototype of a Heidi stuffed animal, which will be "handmade in Germany - finest quality." Schache said he was first alerted to the toy's potential by Bild's office in Leipzig, not far from where his company is based. The opossums will come in two different sizes, including a 50-centimeter life-size toy that will sell for €85 ($110), with some of the profits going to the zoo for Heidi's benefit, Schache said.

Cross-Eyed From a Bad Diet

Hiding behind all of the hoopla is the young opossum, of the Virginia variety, who will live out-of-sight at the zoo until her new house is officially unveiled July 1.

It is a long way from home. According to the zoo, Heidi and her sister, Naira, originally came from the US state of North Carolina, where they were turned over as foundlings to a facility for wild animals. The sisters then made their way to the zoo in Odense, Denmark, before ending up in Leipzig.

The reason for Heidi's crossed eyes is unclear, but zoo officials speculate that it might be because of fat deposits behind her eyes, caused by a bad diet early in life. The eyes might look off, but they cause the animal no pain, and don't affect her ability to get around, according to the zoo. She is, aside from her looks, a normal opossum.

But those looks are the key to her new-found fame. As the song written in her honor predicts: "Our Heidi is no model, and doesn't need blond hair, but she is already famous and soon will be a superstar."