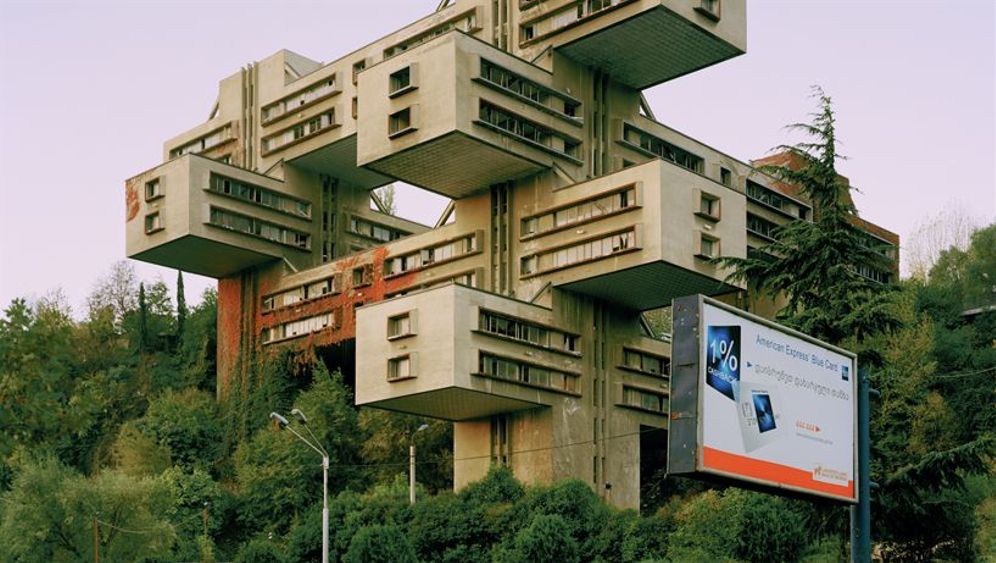 The building in the picture looks as alien as some extraterrestrial battleship and as unrealistic as a megalomaniac architect's Photoshop experiment. Stylistically, it overwhelms the buildings on either side. To the left is an unremarkable apartment block from the 1950s; to the right a pale green, turn-of-the-century building with a classical façade. Between the two sits this architectural monstrosity, gray and forbidding. Deep indentations in the building cast shadows across its front, and the massive upper stories lean out over the street.

The photograph shows the Slovak National Gallery in Bratislava, in the former Czechoslovakia. Construction began in 1969, just a few months after Warsaw Pact troops brought a violent end to the period of liberalization known as the Prague Spring. In those days the Czech Republic and Slovakia were still one country. The building is a relic of the Soviet system, a piece of Communist authoritarian-style architecture.

The picture is just one in Roman Bezjak's book "Sozialistische Moderne - Archäologie einer Zeit" ("Socialist Modernism - Archeology of an Era"). A professor of photography at Bielefeld's University of Applied Sciences, Bezjak made repeated trips to Eastern Europe over a period spanning five years, tracking down examples of socialist architectural style. He has now collected these into a large-format photo book of post-war architecture from countries including Poland, Lithuania, Serbia, Hungary, Ukraine and Georgia.

The buildings vary widely. There are the grandiose constructions along the lines of the National Gallery in Bratislava -- attempts to express communism's visionary energy through opulent stylistic elements, enormous grand gestures and experimental constructions like something from a science fiction movie. But there are also the prefabricated concrete apartment blocks and the pallid façades of multi-purpose halls and shopping centers, whose cheap concrete elements tell tales of poverty and bleak conformity.

Buildings that Break out of the Usual Framework

The idea for this mammoth project first came to Bezjak during his travels as a photojournalist in the 1990s. "I've always been fascinated by these buildings," he says, "but I wasn't sure how to put them in context." In his assignments for German publications such as Merian, Frankfurter Allgemeine Zeitung, Geo and SPIEGEL, Bezjak says, the designs always expressed the difficult societal conditions in the countries in question. Now, Bezjak emphasizes, his purpose in this project is to bring the buildings' aesthetic appeal to the foreground, and he hopes viewers can approach the pictures with a "gaze uncontaminated by ideology."

Still, Bezjak hasn't refrained entirely from commenting on the architecture. He developed strict formal guidelines for his series, photographing it all with a large-format camera and always with the same lens. "I photographed everything that fit within this frame -- in terms of the buildings' dimensions, but also in terms of the possibilities for distancing oneself from the building -- and not the rest," he says.

The result is a collection of images unlike those found in any travel report. His photographs don't try to shrink megalomaniac styles to a scale comprehensible to the eye; they also don't devote themselves completely to a fascination with the architecture's sheer size, as for example in another recently published photo book, "Cosmic Communist Constructions," by French photographer Frédéric Chaubin. Bezjak repeatedly breaks out of the usual photographic idiom.

Take the television tower in Riga, Latvia. Bezjak prunes this approximately 370-meter (1210-foot) tower down to a flat, gray supply bunker from which three gigantic struts loom, only to end abruptly a few dozen meters above in a rust-colored structure, because the upper edge of the picture's horizontal format cuts off the rest. As a result, one of the world's tallest TV and radio towers becomes a meaningless architectural stump, captured by the lens of a photographer looking to show not spectacular enormity, but instead something akin to the fleeting glance of a passerby, for whom the view is simply part of daily life.

Bezjak found many of his photographic subjects from that perspective, the viewpoint of someone simply out for a stroll. "It was relatively intuitive," he says. "I went somewhere where I could climb up high and get a view over the city, and from there I could already see most of these buildings."

To take his pictures, however, Bezjak returned to the city's sidewalks. His photographs, often taken from the opposite side of the street, reflect a passerby's perspective, as journalist Till Briegleb notes in one of his texts that accompany the photographs in Bezjak's book.

In this way, many of Bezjak's photographic subjects look somewhat incidental. The seemingly endless lines of a concrete apartment block in Gdansk, Poland, become a flatteringly patterned surface, while floral ornaments on an event hall in Chemitz, Germany, turn into fancy décor.

Still, some shocks lurk beneath this superficial aesthetic. One example is a pair of pictures of damaged buildings. Their pockmarked facades are certain to tempt some viewers to romanticize the rundown nature of Eastern Europe. A glance at the captions, however, confronts the viewer with these locations' true history -- the pictures were taken in Belgrade and Sarajevo, and the damage was caused by bombs and grenade fragments in the 1990s.

A Failed System, But Also Home

Bezjak's photographs repeatedly met with incomprehension from Eastern European colleagues. Some, he says, couldn't believe anyone would photograph these socialist concrete blocks and grandiose constructions. "They don't want these buildings to be viewed that way and they can't understand why anyone would focus on this phenomenon," Bezjak says. For older colleagues especially, he adds, the project comes across as an attempt to retrospectively redeem socialism's image.

Bezjak asked himself this same question at first -- how critical did the project need to be? Ultimately, he decided against pointing a figure in his photographs. His rationale is that "a book that sets out only to show how terrible and degrading it all was, that's the hegemonic view on the part of the West, which considers itself superior to the East."

Besides, Western Europe's post-war modernism is sometimes indistinguishable from Socialist architecture. One example is Germany's chain of Horton department stores, with their uniform tile facades designed by Egon Eiermann.

Bezjak says he himself grew up in buildings not unlike the ones he photographed for his book, having moved with his parents at the age of three, in the mid-1960s, from Yugoslavia to the small city of Hilden in western Germany, where the family lived in a housing development on the edge of the town.

Perhaps this is another reason why it's important to the photographer that his book show that for the people who live in them, these buildings are not just relics of a failed system, but also home. "That can't be measured according to aesthetic or social categories, but only in terms of memories," he says.

The exhibition: "Roman Bezjak. Archeology of an Era: Socialist Modernism," until October 16, 2011 , at the Sprengel Museum Hanover .