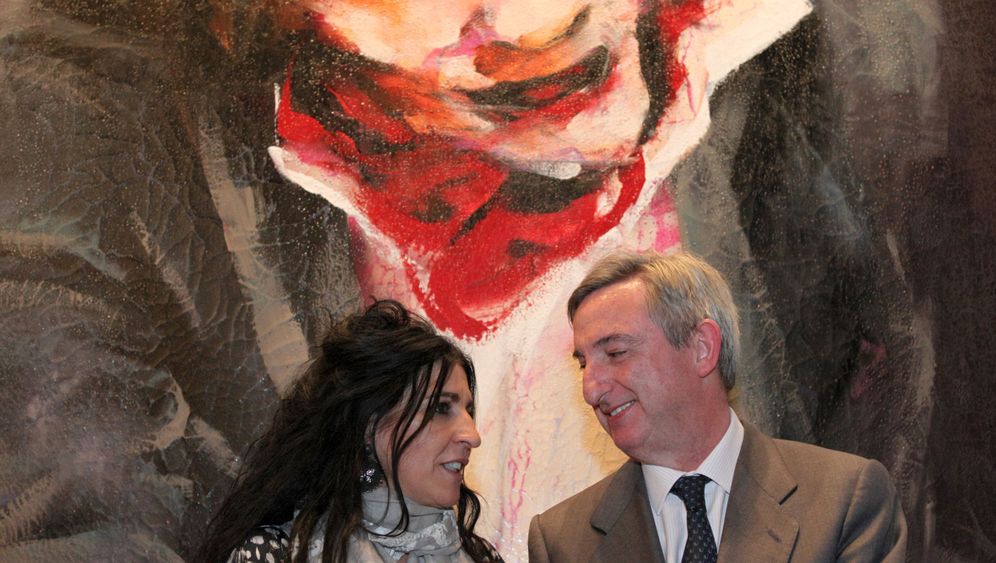 Exotic. Primitive. A people leading romantically wild and unrestrained lives. Such have been the portrayals of Europe's Roma population for centuries.

But such depictions -- in paintings, novels and operas -- have primarily been the work of the gadjikano, or non-Gypsies. Now, though, contemporary Roma and Sinti artists have a voice and a forum of their own. In Berlin, a new gallery has recently opened devoted exclusively to Roma and Sinti art. It is the first of its kind in Germany.

"The goal is to help facilitate Roma artists who find themselves in a niche that doesn't have access to the art market," Moritz Pankok, the curator of the new gallery, told SPIEGEL ONLINE. "Many live in the Balkans or move in spheres further away from the art market. This is a very fruitful area which is just now coming to light."

Pankok is the grand nephew of a Weimar-era Expressionist who achieved acclaim for his woodblock prints and charcoal drawings of German Sinti. And Pankok has been dealing with the work of his grand uncle since he was a teenager. The new gallery, located in the headquarters of the new Aufbau Verlag publishing house in Berlin's Kreuzberg district, opened its doors in April with a show of acrylic paintings by the Polish Roma artist Lita Cabellut.

The opening of the gallery comes at a time when Sinti and Roma intellectuals and artists are emerging across Europe with a renewed awareness of their heritage. They are successful, well-educated and proudly acknowledge their origin.

The Belgrade band Kal, for example -- led by Dragan Ristic -- is pioneering a new style of contemporary, politically-aware Roma music. His brother Dusan, a fine artist in the US, draws attention to issues of Roma stereotyping in his photography. Both brothers criticize what they feel is the endemic passivity of European Roma and seek to address complex Roma issues on a political and aesthetic level.

The trend in the visual arts began two years ago at the Venice Biennale, which saw a Roma pavilion, funded by Hungarian financier George Soros, for the first time in the history of the art event. Until then, Roma art had largely been relegated to ethnographic museums and community centers. It also marked the first transnational pavilion in the Venice Biennale's history.

For Roma and Sinti artists, excitement at the paradigm shift was palpable. Since then, shows by Gypsy artists have been staged across Europe, highlighting the works of an ethnic group that, while often the subject of artwork, has not often been valued as creators of art themselves. Recent shows in Austria, Italy and the United Kingdom have all featured contemporary works of Roma art.

"I am firmly convinced that this is not a flash in the pan, but that this art has a big potential and a certain freshness because it has something to say," says Pankok. "There are themes there that are being dealt with and have to be dealt with by artists. Until now, it hasn't really been recognized."

The Berlin gallery will be showing a new generation of sophisticated contemporary Gypsy artists who are firmly centered in their Roma identity but who are also well versed in the language of contemporary art. Most work is figurative and has a marked affinity to natural forms. There is also a common experience of persecution and discrimination which is often present in the works of Roma and Sinti artists.

The next exhibition at Kai Dikhas, set to open this month, will be of works by the English Traveler artist Delaine Le Bas, who has shown in Berlin before. She is known for her wall hangings and installations which juxtapose kitschy images, quilts, dolls, cartoon characters, family photographs, stitched landscapes, scrawled slogans. They recall Gypsy interiors with walls covered in Persian carpets, towels, bath mats, runners and rugs, depicting Biblical scenes, peacocks and voluptuous, reclining odalisques.

Her work is elaborately flowery and reminds the viewer of Gypsy dress. Different models and styles are combined in one great incoherent confusion.

"I don't think most people who went into my show and looked at my work would necessarily say 'Oh, she's a Roma artist,'" explained Le Bas on a recent visit to Berlin.

Nevertheless, she concedes that a certain Gypsy aesthetic is inescapable. "There are certain give-away things that all the works have; this obsession with color and texture, and the way of putting certain things together," she says. "Sometimes you just can't get away from it."

Galerie Kai Dikhas is unique in that it is the only commercial gallery in Europe devoted to giving Roma and Sinti artists a forum for their artistic expression. But Pankok stresses that the art he intends to present in the gallery has a particular relevance for non-Roma and Sinti viewers in search of an art that is direct, unpretentious and grounded in every-day realities.

"It may be that we lead a kind of alienated life in these big cities, and also here in Berlin," says Pankok. "A life which is marked by iPhones and appointments and e-mails. And I think that this art offers a bit of air to breathe. The way art is sometimes discussed is too elitist. The good thing about this art is that this elitist attitude is somehow unsuitable."