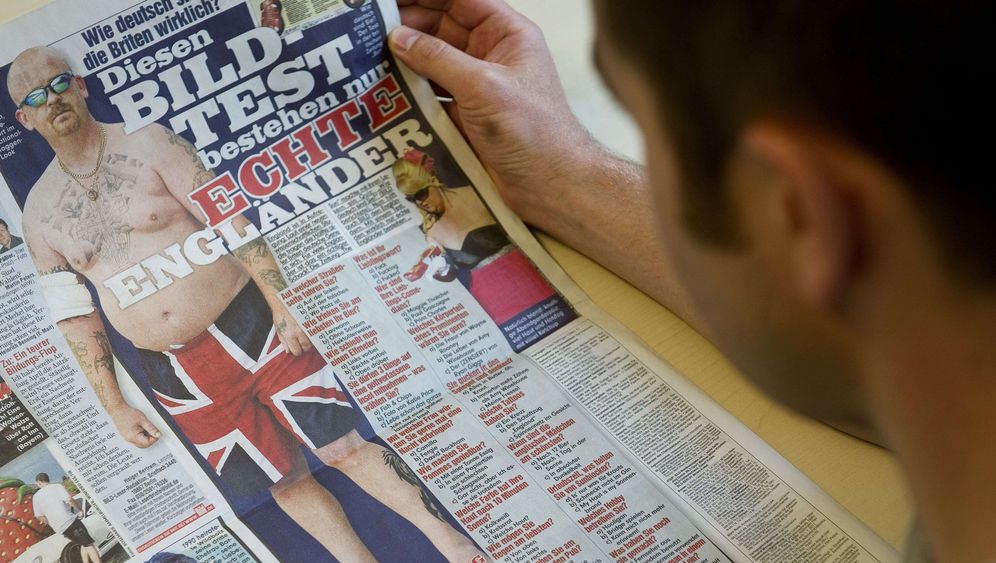 Photo Gallery: What German Stereotypes do the British Hold?

It all started with an innocent science story published in SPIEGEL, and then in English on SPIEGEL ONLINE. A genetic analysis revealed, of all things, that millions of Britons carry a Germanic gene. Britain, it would seem, is more German than many are comfortable with.

The British press, perhaps predictably, went nuts. Hundreds of articles soon appeared in newspapers across the country. And the Daily Mail published a tongue-in-cheek story headlined "Time to Embrace Your Inner Jerry!" essentially claiming that Germans maybe aren't all that bad. "The Germans just seem to come here and fit in without any nonsense -- and they don't rape and pillage anymore," the article reads.

And tabloid The Sun, always eager for a cross-channel gutter press war, even published a quiz. Sample questions: How often do you wear sandals with socks? Ladies, when your armpits are a little hairy, what do you do? What does David Hasselhoff mean to you? By the end of it, readers are left with an accurate depiction of the myriad stereotypes about Germans cherished in Britain. Germans, it would seem, are fashion challenged, ruthlessly efficient (particularly on the football pitch) and often ridiculous -- an image whose accuracy would be difficult to discount.

A Quiz for the Real English

But certainly easy to counter -- at least for Germany's leading mass-circulation tabloid Bild. In service of its ongoing mission to strike back at The Sun whenever necessary, Bild published a quiz of its own on Friday. "Only real English will pass this test," the headline crows next to a picture of an overweight, tattooed man wearing Union Jack shorts. And the best part is: There are no wrong answers.

How do you most like to drink your beer? A) without a head; B) luke warm; C) by the hectoliter.

What is the correct way to shoot a penalty in football? A) wide left; B) wide right; C) over the top.

When are English women at their most beautiful? A) after 12 beers; B) after a day in the sun; C) in complete darkness.

If you chose all the answers, the solution to the quiz reads, you are the "perfect Englishman."

So who wins? Clearly the Brits. Bild seems to have forgotten that if half of those sun-burned, fish-and-chips eating violence-prone drunkards from Britain carry a German gene, perhaps it doesn't reflect terribly well on their own readers.

But at least the two papers can agree on one thing: Whatever function that traveling German gene might have, it clearly isn't responsible for success at taking penalties.

14 Bilder Photo Gallery: What German Stereotypes do the British Hold?