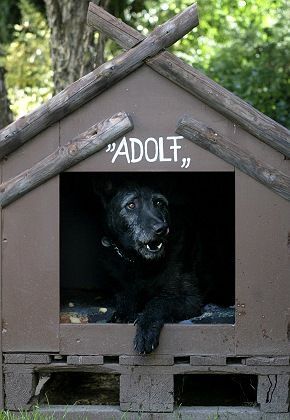 Dog lovers in Berlin take note: the city's animal shelter has a new ward looking for a good home. The nine-year-old German shepherd crossbreed is very affectionate, likes people and is in good health. There's just one problem: Adi -- or Adolf, as he was formerly known -- has been trained to raise his right paw in a Hitler salute whenever he heard the command "Salute!"

However, poor Adolf was only following orders. His owner, identified only as Roland T., taught the dog to perform the Hitler salute on command.

Adolf and his owner became famous in 2003 after Roland T. got his dog to perform his party trick in front of police. The gesture landed the Berlin pensioner in court, charged with displaying symbols of a banned organization. The use of Nazi symbols, slogans or gestures is banned in Germany.

Now Roland T. is off to jail. He is reporting to a Berlin prison Wednesday to serve a five-month sentence for displaying Nazi symbols. The repeat offender, who was notorious in Berlin for openly giving Nazi salutes and wearing Hitler T-shirts, was given a series of suspended sentences but now has to do time after authorities lost patience with him. Judges had previously been lenient with the former car salesman, who was considered to have diminished culpability due to brain damage sustained in a 1995 accident.

On Tuesday, Roland T. handed Adolf over to the Berlin Animal Shelter. He reportedly showed little emotion as he said goodbye to his former companion, who has now been renamed Adi.

Berlin Animal Shelter spokeswoman Evamarie König said that the dog was healthy and obedient and had been well looked after. "We hope that he will get a new home where he will have no fear of being put down," she said.

Earlier this year, Roland T. had told the tabloid Berliner Kurier that he would put Adolf to sleep because he could not afford the dog's pet food as a result of all the fines he had to pay. He said he planned to have the dog put down on April 30, 2008, the anniversary of Hitler's death. Roland T. also claimed that Adolf had been born on April 20, Hitler's birthday.

But Adolf was saved from execution and is instead returning to his former home. Roland T. had taken the then one-year-old dog from the same animal shelter eight years ago.

Naturally the animal shelter at the time had no idea what would befall the young dog. "You can't look inside people's heads," said König. "A lot can happen in eight years, people can change. Certainly the shelter staff did not suspect anything."

However, König says that Adolf does not actually indulge in unconstitutional behavior. "He doesn't make the Hitler salute," she says. "He just lifts his paw like any other dog. It's anatomically impossible for a dog to lift its paw that far."

The animal shelter hopes that Adi will find a new owner within a few days. Normally a nine-year-old large black dog like him would be hard to shift, König says, as people generally prefer small, young, light-colored dogs. "However, we think he will quickly find a new owner because he is so famous," she says.

Is there a danger that another Nazi sympathizer might want the dog? König doesn't think so: "He's just a dog like any other and doesn't have anything that would make him interesting to right-wing extremists." However, she said the shelter would "take care" in choosing the new owner.