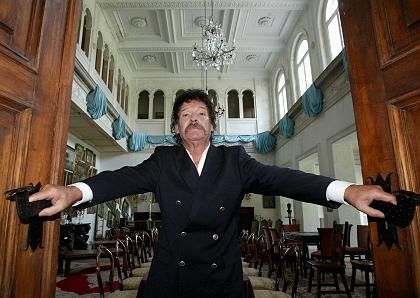 Ottomar Rodolphe Vlad Dracula Prinz Kretzuleso in his palace southeast of Berlin where he would hold blood donor parties on behalf of the Red Cross.

Germany is mourning the death of its very own Count Dracula, a baker who was legally adopted by an ancient Romanian dynasty whose roots go all the way back to the legendary Romanian prince.

He was plain Ottomar Berbig until the 1980s, when his life was changed by a chance encounter with an elderly Romanian princess who was struck by his Transylvanian appearance with his curly black hair and drooping moustache.

"She thought I looked typically Romanian, so she decided to introduce me to the rest of the family," Ottomar once recalled. She adopted him and he went on to fulfil the role of Count Dracula with gusto.

Vlad Dracula, also known as Vlad the Impaler, was a 15th century prince notorious for the cruel punishments he meted out. He served as the inspiration for the blood-sucking vampire villain in Bram Stoker's 1897 novel Dracula.

Ottomar the baker was more benevolent. He organized "blood-sucking parties" in conjunction with the German Red Cross at which guests were invited to donate blood. He also held medieval festivals and ghost story-telling evenings. Hundreds of guests came to his parties at a 46-room palace he bought in 1995 in Schenkendorf, southeast of Berlin.

He became a local councillor and campaigned fiercely against Schenkendorf being incorporated into the neighboring town of Mittenwald, even resorting to proclaiming the town "Dracula's Principality."

Financial difficulties forced him to move out of his palace last year and his family confirmed on Tuesday that he died of a brain tumor last weekend. But Dracula lives on in his son, Ottomar Dracula Junior, who turns one next month.