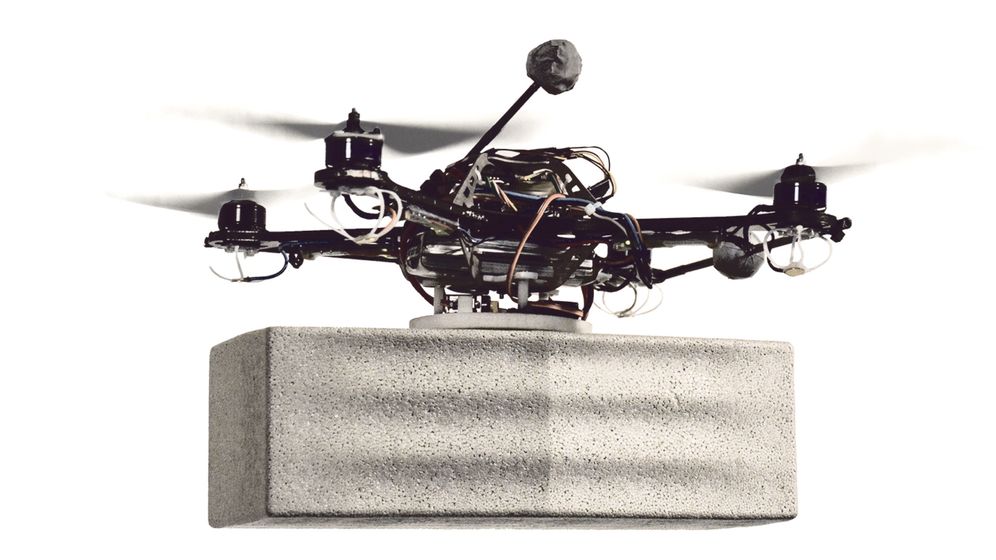 It's a special kind of dressage: When Raffaello D'Andrea lifts his right arm, a plate-sized helicopter obediently starts its engine. When he moves his finger through the air, the device follows as if on a horse's lead.

D'Andrea is a drone trainer. The professor is standing in socks with his legs apart on the floor of a gymnasium-like building at the Swiss Federal Institute of Technology (ETH) in Zurich. The floor is covered with mats to soften the impact when the expensive devices crash to the ground. And lest any errant drones escape from the "Flying Machine Arena" in the Mechanical Engineering Department, the 10-by-10-meter (1,075-square-foot) interior space is also surrounded by a net.

Curious students are gathered outside a glass viewing panel. They can hardly believe their eyes when they behold flying robots reacting to hand signs like trained falcons.

"This is actually the easiest exercise," says D'Andrea, one of the directors of the ETH's Institute for Dynamic Systems and Control (IDSC). He raises his left hand, and the helicopter does a somersault, then another and another, until D'Andrea lowers his hand again. He claps, and the drone promptly lands.

At first sight, the way D'Andrea controls the device with gestures might seem like magic. But the researcher is aiming for something quite different than magic: He wants to build flying robots that are so ordinary and simple that anyone can control them. "Today's cars are my ideal," he says. "They are nearly perfect; all you have to do is put gas in them and change the oil from time to time."

But even as he watches his flying robots, D'Andrea's thoughts are already elsewhere: in a car flying above the clouds. To bring this dream closer to reality, he wants to teach his drones to do what their pilots want while at the same time avoiding all the beginners' mistakes that come with navigating in three dimensions.

The apparent magic of D'Andrea's gesture-controlled devices is based on a simple trick: The Kinect motion sensor of a conventional game console is on the ground observing the trainer. A computer translates his gestures into control commands and transmits them via wireless network to the flying drone, while eight ceiling-mounted cameras monitor its position. The individual components are readily available in any electronics store, but the way they interact are reminiscent of the magical Quidditch games in the "Harry Potter" films.

Although only in his mid-40s, D'Andrea already has a wide-ranging career behind him. Born near Venice, he grew up in Canada and studied engineering in Toronto. As a professor at Cornell University, in Ithaca, New York, he and his team won the Robot Soccer World Cup, or RoboCup, a number of times. He was also one of the founders of Kiva Systems, a company that makes systems employing mobile robots for warehouse automation, which are used by companies such as Walgreens and Staples.

In 2007, the ETH convinced D'Andrea to move to Zurich by promising him the robot arena. By now, he and his students have assembled a true revue.

The helicopters, each or which is equipped with four rotors, have alphabetized names: Alpha, Bravo, Charlie, Delta. Bravo and Charlie are hovering in the middle of the arena, playing tennis. A device resembling a small badminton racket is mounted above the rotors of each helicopter. By nimbly flying up and down, the machines bat a ball back and forth, sometimes up to 20 times. D'Andrea and his students are sitting next door in the control room, monitoring the behavior of the tennis-playing "quadcopters."

In the next act, a Ph.D. student places a rod on the back of a robot. It then hovers with such sensitivity and precision that it manages to balance the rod vertically on its back.

Of course, this is nothing compared to the quadcopter that Sergei Lupazhin, another Ph.D. student, has taught to play the piano. It hovers from one key to the next playing "Jingle Bells." The scratch marks on the keyboard are the only thing to betray test flight crashes.

D'Andrea wants to impart something that could be called "motion intelligence" to everyday objects. Computers can already film, navigate and speak, but he also wants to automate their movement in space. For the 2001 Venice Biennale art exhibit, he developed a curious table that rolled toward -- and unsettled -- its visitors.

The robotics expert now turns his attention to architecture. In a mix of ballet, performance art and slapstick, Alpha, Bravo and the other helicopters build a tower six meters high out of 1,500 building blocks. An exhibition in Orléans, France, used the system to offer a utopian vision of a future in which tall buildings are built by flying robots rather than construction workers.

Though playful-looking, the aerial performances are actually part of a determined European effort to challenge the supremacy of Japan and the United States, the two superpowers in the world of robotics.

Japan is home to a dominant share of the more than 1 million industrial robots around the world. Although these are most often found in its automobile plants, the country has also come up with miraculous robots, such as Honda's humanoid robot Asimo, which can speak, walk and dance. The US military, on the other hand, makes headlines with its remote-controlled combat drones, which use missiles to kill people in Pakistan and Afghanistan. In fact, the US Air Force already trains more people to operate drones with joysticks than pilots to fly bombers and fighter jets.

But now Europe wants to soar past the competition -- with partially autonomous flying cars. The €4.3-million ($5.5-million) EU program called "myCopter" is designed to help develop the third dimension for personal travel as part of a so-called "personal air transport system" (PATS).

The myCopter consortium includes the German Aerospace Center (DLR), the University of Liverpool, the Karlsruhe Institute of Technology (KIT) and the Max Planck Institute for Biological Cybernetics, based in the southwestern German city of Tübingen. "Flying cars are not a question of if, but when," says Heinrich Bülthoff, director of the myCopter working group in Tübingen.

Avoiding Chaos in the Sky

Of course, the dream is almost as old as the airplane itself. As long ago as 1917, a prototype made the first hops into the sky. In the United States, the Terrafugia project is on the verge of introducing its flying-car concept vehicle on the market.

Still, if large numbers of commuters are to fly through cities in the future, collisions and crashes are to be expected, unless the machines are largely self-guided.

"Our models are the swarms of starlings that fly south in the fall," says Dario Floreano, a professor casually dressed in a white shirt and baggy cargo pants. Seven flying robots are hanging from the ceiling like bats, dangling until given a command.

"We have already managed to have 10 drones fly in a swarm," Floreano says enthusiastically. Within the myCopter team, his laboratory at the ETH in Lausanne is in charge of teaching the flying machines how to communicate with each other in order to utilize the air space efficiently and without colliding.

Outside the laboratory window, several lightweight flying wings are circling steadily in a strong wind 100 meters above the parking lot. The robots communicate with each other to decide how to choreograph their movements. Unlike the helicopters in Zurich, they do not require a central control device. A computer in the laboratory merely records their behavior to hone it even more precisely.

In a sense, the drones learned their swarming behavior from Batman. It is based on the so-called Reynolds algorithm developed by the American programmer Craig Reynolds in 1986. Reynolds later created digital swarms of bats for films, such as "Batman Returns."

Reynolds recognized that the complex choreography of a flock of birds or a school of fish is surprisingly simple. It requires no more than a few simple commands, such as "maintain the same distance from all neighbors" and "fly with them in a single direction."

The more Floreano imagines a future with flying cars, the simpler his models become. "The next thing we'll be doing is studying the flying behavior of insects," he says. His team is experimenting with palm-sized flying devices equipped with seven "compound eyes," or tiny cameras taken out of computer mice.

Meanwhile, back in the flight arena in Zurich, Floreano's colleague D'Andrea is starting the grand finale of his variety show. To the booming sound of "Armageddon," a rock ballad from the Canadian band Prism, Alpha and the other drones dance in the air, pirouetting and gliding up and down with the help of a software called "Choreography Generator."

During an especially daring aerial maneuver, Charlie flips over and crashes. "Great, we'll have to look at that," says D'Andrea as he hurries to the control room next door. "Crashes are great," he adds. "We can learn a lot from them."