It turns out the fall of man probably didn't begin with an apple. More likely, it was a handful of mushy figs that first led humankind astray.

Here is how the story likely began -- a prehistoric human picked up some dropped fruit from the ground and popped it unsuspectingly into his or her mouth. The first effect was nothing more than an agreeably bittersweet flavor spreading across the palate. But as alcohol entered the bloodstream, the brain started sending out a new message -- whatever that was, I want more of it! 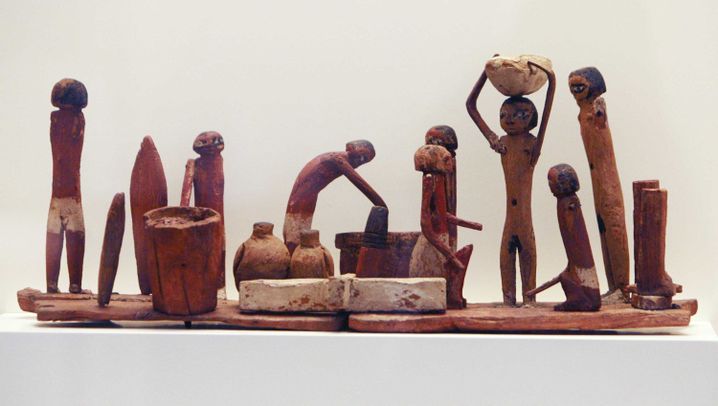 Humankind's first encounters with alcohol in the form of fermented fruit probably occurred in just such an accidental fashion. But once they were familiar with the effect, archaeologist Patrick McGovern believes, humans stopped at nothing in their pursuit of frequent intoxication.

A secure supply of alcohol appears to have been part of the human community's basic requirements much earlier than was long believed. As early as around 9,000 years ago, long before the invention of the wheel, inhabitants of the Neolithic village Jiahu in China were brewing a type of mead with an alcohol content of 10 percent, McGovern discovered recently.

McGovern analyzed clay shards found during excavations in China's Yellow River Valley at his Biomolecular Archaeology Laboratory for Cuisine, Fermented Beverages, and Health at the University of Pennsylvania Museum.

The bearded archaeologist is recognized around the world as an expert when it comes to identifying traces of alcoholic drinks on prehistoric finds. He ran so-called liquid chromatography coupled with mass spectrometry on the clay remnants from Asia and found traces of tartaric acid -- one of the main acids present in wine -- and beeswax in the shards' pores. It appears that prehistoric humans in China combined fruit and honey into an intoxicating brew.

Additionally, plant sterols point to wild rice as an ingredient. Lacking any knowledge of chemistry, prehistoric humans eager for the intoxicating effects of alcohol apparently mixed clumps of rice with saliva in their mouths to break down the starches in the grain and convert them into malt sugar.

These pioneering brewers would then spit the chewed up rice into their brew. Husks and yeasty foam floated on top of the liquid, so they used long straws to drink from narrow necked jugs. Alcohol is still consumed this way in some regions of China.

McGovern sees this early fermentation process as a clever survival strategy. "Consuming high energy sugar and alcohol was a fabulous solution for surviving in a hostile environment with few natural resources," he explains.

The most recent finds from China are consistent with McGovern's chain of evidence, which suggests that the craft of making alcohol spread rapidly to various locations around the world during the Neolithic period. Shamans and village alchemists mixed fruit, herbs, spices, and grains together in pots until they formed a drinkable concoction.

But that wasn't enough for McGovern. He carried the theory much further, aiming at a complete reinterpretation of humanity's history. His bold thesis, which he lays out in his book "Uncorking the Past. The Quest for Wine, Beer and Other Alcoholic Beverage," states that agriculture -- and with it the entire Neolithic Revolution, which began about 11,000 years ago -- are ultimately results of the irrepressible impulse toward drinking and intoxication.

"Available evidence suggests that our ancestors in Asia, Mexico, and Africa cultivated wheat, rice, corn, barley, and millet primarily for the purpose of producing alcoholic beverages," McGovern explains. While they were at it, he believes, drink-loving early civilizations managed to ensure their basic survival.

Archaeologists have long pondered the question of which came first, bread or beer. McGovern surmises that these prehistoric humans didn't initially have the ability to master the very complicated process of brewing beer. However, they were even more incapable of baking bread, for which wild grains are extremely unsuitable. They would have had first to separate the tiny grains from the chaff, with a yield hardly worth the great effort. If anything, the earliest bakers probably made nothing more than a barely palatable type of rough bread, containing the unwanted addition of the grain's many husks.

It's likely, therefore, that early farmers first enriched their diet with a hybrid swill -- half fruit wine and half mead -- that was actually quite nutritious. Neolithic drinkers were devoted to this precious liquid. At the excavation site of Hajji Firuz Tepe in the Zagros Mountains of northwestern Iran, McGovern discovered prehistoric wine racks used to store airtight carafes. Inhabitants of the village seasoned their alcohol with resin from Atlantic Pistachio trees. This ingredient was said to have healing properties, for example for infections, and was used as an early antibiotic.

The village's Neolithic residents lived comfortably in spacious mud brick huts, and the archaeologist and his team found remnants of wine vessels in the kitchens of nearly all the dwellings. "Drinking wasn't just a privilege of the wealthy in the village," McGovern posits, and he adds that women drank their fair share as well.

In Iran of all countries, where alcohol consumption is now punishable by whipping, the American scientist found vessels containing the first evidence of prehistoric beer. At first he puzzled over the purpose of the bulbous vessels with wide openings found in the prehistoric settlement Godin Tepe. Previously known wine vessels all had smaller spouts.

McGovern was also perplexed by crisscrossed grooves scratched into the bottoms of the containers. Could it be some kind of mysterious inscription?

But back in the laboratory, he isolated calcium oxalate, known to brewers as an unwanted byproduct of beer production. Nowadays, breweries can filter the crystals out of their brew without any difficulty. Their resourceful predecessors, working 3,500 years B.C., scratched grooves into their 50-liter (13-gallon) jugs so that the tiny stones would settle out there. McGovern had discovered humankind's first beer bottles.

The ancient farmers in Godin Tepe harvested barley from fields near the village and mashed the crop using basalt stone. Then they brewed the ground grain into a considerable range of varieties, enjoying a sweet, caramel-flavored dark beer, an amber-hued lager-like concoction, and other pleasant-tasting beverages.

Around the same time, the Sumerians were paying homage to their fertility goddess Nin-Harra, whom they considered to be the inventor of beer. The creators of Mesopotamian civilization scratched instructions for brewing beer onto small clay tablets in Nin-Harra's honor. The main ingredient in their variety of beer was emmer, a variety of wheat that has since nearly disappeared.

Thus the human project that started with the first hominids to stumble around under fruit trees reached completion with these prehistoric beer drinkers. "Moderate alcohol consumption was advantageous for our early ancestors," McGovern speculates, "and they adapted to it biologically."

It is a legacy that still burdens humankind today. The archaeologist, however, sees himself as reasonably balanced in this respect. Ancestors on one side of his family, the McGoverns, opened the very first bar in their hometown of Mitchell, South Dakota. On the other side, however, an especially puritanical branch of the family originated from Norway and strictly avoided alcohol consumption.