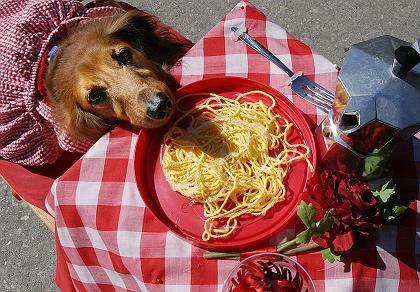 "Dog bites man," so goes the old journalism saw, "is not a news story. Man bites dog is." It is a rule that normally serves journalists well. But, as a case in the town of Münster shows, it is not always applicable.

A 47-year-old man in the northwestern German city had apparently had one too many on Tuesday night when he decided to show his friend's dog who was boss. He got down on all fours in his friend's apartment and, with the large mutt presumably watching in disbelief, began to munch out of the dog dish.

As the man had hoped, the question as to which of the two should be considered alpha male was quickly answered. The dog attacked the man and bit him in the face. The severely injured wannabe mutt was rushed to the hospital. "I have no information that he is missing any body parts," police spokesman Klaus Laackman told SPIEGEL ONLINE. "But you can imagine the damage. The face is a very sensitive part of the body."

The police were being careful on Wednesday not to give out too much information, concerned as they were about the media making the beta male's life more difficult that it had already become. Laackman, though, couldn't quite grasp the motive. "I would certainly never have done such a thing," he said. "Plus, I can't say that I have much interest in eating dog food."