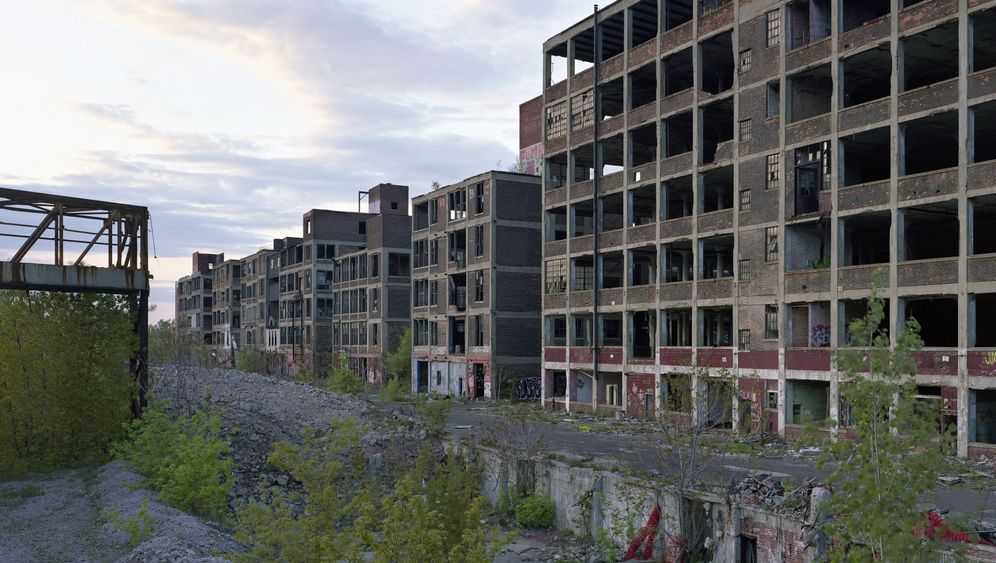 The old white-haired man was awarded the medal for outstanding service during wartime and TIME magazine praised him enthusiastically: Albert Kahn's contribution to the defeat of enemy powers is greater that that of most others, a journalist wrote in 1942. But the 73-year-old man had never seen the front line during the World War II. He fought, so to speak, from his desk in an office in Detroit.

Albert Kahn was an architect. His airports, naval bases and factories housed a large amount of American armaments. No one developed, planned and built more quickly, more efficiently or more economically that he did. He earned his war medal at the drawing board. Kahn, the son of an immigrant rabbi from Germany, was the architect of modernity -- and of modern war.

It was no accident that his office was located in Detroit, a metropolis that had grown into one of the most important industrial towns in the world by the beginning of the 20th century. It was a center of modern capitalism and the world capital of automobile production. This is where Henry Ford established his Highland Park factory and created the production line delivering that most-desired of consumer goods, the Model T Ford. It was here the mass-production pioneer found many copycats. Detroit became the army's biggest supplier during World War II; it became known as the "armory for democracy." The city's rise seemed unstoppable, and so did the rise of its chief builder, Albert Kahn.

The architect of modern Detroit began his career in 1907, when he was commissioned to design a new plant for luxury automobile producer Packard Motors. Instead of choosing traditional materials like wood and stone, Kahn opted for a concrete construction, which was not only fireproof but also allowed for large, light-filled practical space. Soon Henry Ford noticed these architectural qualities, and engaged Kahn for an innovative project.

Ford wanted to put everything under one roof, and Kahn pulled off something revolutionary in the village of Highland Park (now surrounded by, but separate from, Detroit): a four-story factory flooded with natural light which could accommodate up to 70,000 workers. Assembly-line production was a symbol of modern times, and Highland Park became the place where "the 20th century was born," as historian Bob Casey put it. When the factory became too small, Kahn designed new premises for Ford just south of Detroit -- the River Rouge Complex, which opened in 1927 and held 90,000 workers. It was the biggest industrial plant in the world at the time.

The Ford plants were the result of a perfect symbiosis: The auto manufacturer had found his perfect builder in Kahn. His talent for erecting factories faster than anyone else grew from a clever combination of engineering knowledge and tight business organization -- not so different from car manufacture. Kahn carried the principles of mass production into the art of architecture. His Detroit office became a factory-planning factory. As soon as he signed a new job, the team swung into motion, not just drawing up building plans but simultaneously sourcing contractors and gathering estimates for materials. Kahn built factories like they were coming off an assembly line.

The Car Shapes the City

"When I started out," Kahn said later, "architects only designed museums, cathedrals, monuments and stately houses. Factory buildings were jobs for the office helpers. Now I am still the office helper who designs factories, and honors have not affected that."

Building factories did not damage Kahn's reputation. Quite the contrary. The architect erected more than 1,000 buildings for Detroit automakers, including the General Motors building, the company's headquarters and the largest office building in the world at the time when it was finished -- the 30-story Fisher Building became the landmark of the city. Kahn and other star architects of the early 20th century, such as Whitney Warren, Charles Wetmore, Daniel Burnham and Elsie Sardine created a skyline using a range of different historic styles. They decorated their skyscrapers with marble columns, extravagant ornaments and gilded roofs.

Job seekers swarmed to Detroit. The economic boom had made the town one of the richest in the world, and its architecture reflected that wealth. Rows of elegant villas went up along the elm-lined avenues. Public transport -- and above all the arrival of the automobile -- shaped the modern town.

Even the leader of the Soviet Union was impressed by Detroit's development. The dictatorial powermonger Josef Stalin saw in all this industrialization a way to release his agricultural nation from its backwardness -- and hired the architect. Kahn erected more than 500 factories for the Soviet leader in just two and a half years.

He began with the Stalingrad "Felix Dzerzhinsky" tractor factory in 1929-30, a factory that would play a special role years later in the war against the invading German army. The battles around the industrial complex were up to that point the hardest for the Nazis, with the heaviest losses. The tractor factory became the site of the decisive Battle of Stalingrad, which became a turning point in World War II.

Detroit's rise as an industrial metropolis continued after the war. Almost two million people were living in the city at the start of the 1950s. Thanks to the good wages to be earned in the automotive industry, the American dream of home ownership was within reach for many people. But "Motor City" had already passed its peak.

The first signs appeared, in fact, in the '50s. The US government was concerned that important industrial centers would be targets for nuclear attacks. It encouraged businesses to move their production bases outside of the largest towns. Highways banded the new sites into small towns and suburbs. Staff in the old factories was reduced as life organized itself around these new business centers.

Racial unrest in 1967 contributed to a shift of the white population out of downtown Detroit. Many moved to the suburbs. The city's population shrank in the '70s and '80s as jobs were lost to competition from Germany and Japan. Jobs on the edge of town could only be reached by people who owned a car. Modern achievement became an existential problem.

By then the good times were over for this once-fêted metropolis of modernity. Within half a century Detroit lost almost a million people, or half of its population. Many inner city buildings, including the United Artists Theater and the majestic train station, were abandoned. When the last tenants moved out of some apartment blocks, the heating was simply turned off and the electricity disconnected. Water leaked into the empty buildings, frost cracked the walls and columns, and the window panes shattered. The result is an almost gothic vision of decline.

Thirty-five per cent of the inner city has become uninhabitable. French photographers Yves Marchand and Roman Meffre have documented its ruins at the start of the 21st Century, and their book of photos (now published in Germany) shows the end of an era. Detroit's architect, Albert Kahn, was not around to witness the damage -- or even end of the war. The 73-year-old died in December 1942, a few months after his award for military service landed on his drawing board.