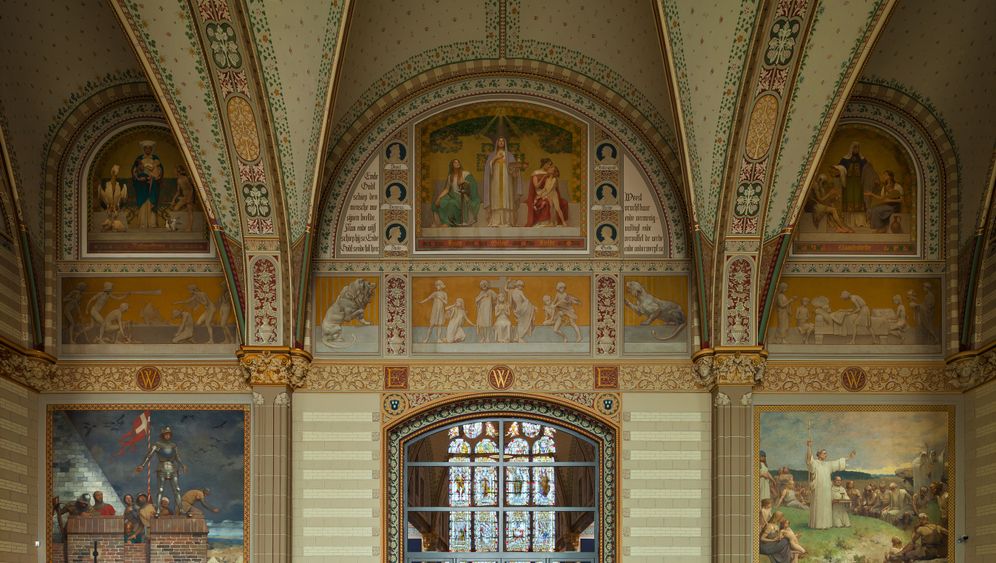 Only true celebrities would dare to withdraw from the public eye for 10 years. They are missed but never forgotten. Amsterdam's Rijksmuseum, the most important museum in the Netherlands and one of the world's top museums, has been closed since 2003. It has been rebuilt and renovated, and its displays have been redesigned. With its many delays and cost increases, the project has occasionally seemed to have become a national drama. The final cost of the renovation project was €375 million ($480 million).

Organizers hope that all will be forgotten on April 13, when Beatrix, the Dutch queen, will be the first guest at the newly reopened museum shortly before abdicating her throne to her eldest son. The architecture will help smooth over public dissatisfaction with the project. The modern atrium alone makes any criticism seem petty and, behind it, visitors will discover a magnificent collection, including works such Rembrandt's "The Night Watch" and paintings by Vermeer and Frans Hals. Of the 8,000 objects on display, 5,000 have been restored. The museum's management anticipates large crowds in the first few months, with visitors waiting in line for hours to enter the museum.

The renovated Rijksmuseum is more than just a museum. It's a symbol of a new era in Amsterdam.

Another new era began exactly 400 years ago. The canal belt was built at the time, an investment in the infrastructure that was also an expression of a collective ambition. In fact, it marked the beginning of the so-called Golden Age, when Amsterdam became the economically richest and artistically most inventive city in the world at the time. Rembrandt was the painter of prosperity. The city fell into decline after that, only to experience another boom in the late 19th century, a time when many of today's cultural facilities were created. Wim Pijbes, director of the Rijksmuseum, says that he expects to see a third golden era for Amsterdam to dawn this year.

In the last few years, half a billion euros were spent to renovate three palaces of art on Museumplein (Museum Square): the Rijksmuseum, the equally world-famous Van Gogh Museum, both government-run institutions, and the city-owned Stedelijk Museum. This last museum, which specializes in contemporary art, was reopened in 2012 after a nine-year renovation that included the addition of a spectacular new wing. There will also be celebrations to mark the 125th anniversary of the nearby Concertgebouw concert hall, which turns 125 this year.

Culture Instead of Cannabis

Amsterdam seems to be turning into another Florence, one big museum -- or at least the major cultural institutions are trying to make it that way. The city isn't entirely at the mercy of tourists yet. It is still a place of ordinary people and lives, and yet downtown Amsterdam is increasingly becoming a monument in itself. "You can see 'The Night Watch' in our museum," says Pijbes, "and then walk over to the house where Rembrandt painted it. If you imagine the cars aren't there, Amsterdam looks like it did in the 17th century."

Pijbes is convinced that people don't always want more hectic lives, but are actually searching for a sense of comfort and security. He cites New York as a good example: a city that has reinvented itself, that has become luxurious but not elitist, that exudes safety today, a city in which taxi drivers can be trusted and the restaurants have improved.

For Pijbes, Amsterdam is still "a city of commerce, where everything has to happen right away." If he had his way, downtown Amsterdam would exude a more harmless image, shed its residual griminess and emphasize culture instead of cannabis. Cultural tourists, he says, stay longer, do more and spend more than backpackers, and they are welcomed all over the world. They seek the idyllic in a city. And, for them, a museum is a place of leisure.

Seven million tourists visited Amsterdam in 2012. But Pijbes is enthusiastic about a different number: the 51 million passengers who used Schiphol Airport last year.

Kai Vöckler, a professor of urban development at the Offenbach University of Art and Design, in western Germany, says that people have a fairly precise image of what a European city should look like, and that a great deal of effort goes into preserving this image. It does not exclude contemporary architecture, although such architecture should not disrupt an unmistakable and typically European environment. Picturesque Europe, he adds, is currently the most coveted thing Europe has to offer.

Vöckler says that many cities are taking great pains to cover up the fact, at least in their downtown areas, that they are also metropolitan areas and often international transportation hubs. Much is shifting to outlying areas, such as supplier companies, shopping centers and housing for immigrants.

These cities compete for tourists, as well as for companies seeking new locations. The competition has spread beyond Paris and London to include places like Bilbao, Barcelona and Basel. To remain competitive, cities must offer more than just office space. They should exude an atmosphere of success. Skyscrapers, on the other hand, have become the trademarks of Asia's rise to economic prosperity, and they are also fundamentally symbols of a bygone era.

This is where art comes in. Cities that possess it in abundance and know how to present it, like Amsterdam, become more appealing to residents, commuters and tourists alike. The museum directors in Amsterdam know their audience well. They know where visitors come from, how long they stay and what they expect from art: to be entertained or challenged, for example.

In addition to seeing the past, people want to re-experience it. They want atmosphere, even inside a museum, which is why the Rijksmuseum will celebrate art history in the future, with dark walls and shimmering light. The new approach means placing massive antique armoires between old paintings, or even a canon in front of a Baroque painting of a group of armed citizens. It is a blending of genres designed to invite visitors to step into an era instead of merely observing it.

Quite a few employees of the Rijksmuseum began working there when the museum was already closed. Pijbes, for example, was only appointed its director in 2008. In the past, the Rijksmuseum saw about 1.5 million visitors a year. But that figure could soon reach 2 million, "or perhaps even more," says Pijbes.

Times have become harder. In the Netherlands, government subsidies for the arts were slashed from €900 million last year to €700 million today. The Rijksmuseum has also lost 15 percent of its subsidies, but its director says that it is possible to make up for the shortfall by attracting art sponsors. "Holland is still a rich country," he says. Immediately after assuming his position, he started nurturing close ties with patrons of the arts. More than 30 wealthy individuals have already donated more than €250,000 each, he says, while one private donor provided €2 million for the museum's gardens.

Broadening the Scope of Exhibits

It's a two-minute walk from the Rijksmuseum to the Van Gogh Museum. The main building, currently under renovation, was built in 1973, and now, 40 years later, it is getting a major facelift. Some 85 percent of its 1.5 million visitors are from abroad. There are now fewer North Americans than before the financial crisis, but more Europeans, as well as South Americans and Asians. Few Chinese visit the museum, however. Wealthy Chinese find diamond merchants more appealing than Van Gogh, while average Chinese tourists would rather see the windmills in the surrounding countryside. Nevertheless, they represent an enormous potential audience for Amsterdam's cultural institutions.

Axel Rüger, the German-born director of the Van Gogh Museum, says: "We are facing a unique opportunity." The major opening show, which begins in May, will allow visitors to rediscover Van Gogh, perhaps the most legend-enshrouded painter, as a methodical, disciplined and perfectionistic artist rather than a madman. The exhibition was preceded by a lengthy research project, part of an effort to appeal to aficionados and the broader public alike. According to the announcement for the show, visitors will experience what it was like "to look over Van Gogh's shoulder." The curators are also exhibiting tubes of paint and Van Gogh's palette.

Rüger has headed the museum for seven years. For a long time, he says, the museum tried to de-emphasize the Van Gogh myth and focus on the purely artistic and art-historical aspects. But visitors are also fascinated by the man behind the paintings. "Van Gogh is one of the city's main attractions," Rüger says. "He awakens emotions like no other artist. It's a fact of life, and we have to pay more attention to it in our museum work."

Amsterdam is only one example of how important museums and a museum-like environment have become for the prestige of cities and entire nations. Paris has enlarged the Louvre with a new €100 million wing, Oslo has opened a new contemporary art museum with its own beach, Hamburg is getting the new Elbphilharmonie concert hall, and Berlin a new city palace. Renovation already seems to be the status quo on the German capital's Museum Island.

Sometimes government subsidies are merely spent to uphold an illusion, while spending on everyday operations is reduced. The Prado, in Madrid, was expanded a few years ago, but now the larger facilities must make do with less government funding.

The ongoing financial crisis is impeding but not halting a sweeping development. London, for example, has wanted to expand its Tate Modern with a massive, pyramid-shaped addition for years. Despite its monumental proportions, the contemporary art museum has become too small for the more than 5 million visitors it attracts every year. Although the expansion is only slated to begin in 2016, the project is at least in the works. London's Victoria and Albert Museum, which has been undergoing a room-by-room renovation project since 2001, is currently one of the world's most talked-about museums thanks to a David Bowie show that is drawing large audiences. Indeed, the British are clearly experts on the importance of culture.

Meanwhile, the perfecting of Amsterdam's museum landscape continues. At the Rijksmuseum, the next renovation will follow on the heels of the upcoming dedication. A new ensemble of rooms for special exhibits is being built inside the old architecture, in a side wing that used to be inaccessible to the public. Museum directors once had time to write books, says Rijksmuseum Director Pijbes, "but you can't do it anymore today." The Van Gogh Museum will also continue to renovate after reopening, building a new entry area for €15 million to better accommodate the growing crowds of visitors.