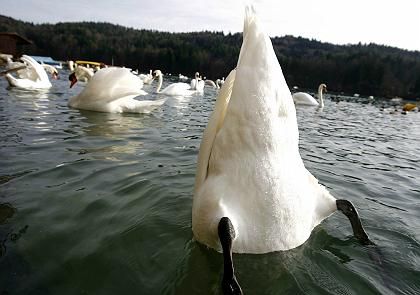 A man who grabbed a live swan by the neck and used the bird as a club to beat up another man has been sentenced by a court in Munich, local media reported on Wednesday.

The swan survived the attack unhurt and flew off afterwards. The assailant, named only as Sebastian P., was drunk at the time and was given a two-year suspended sentence.

He and a friend had been drinking on the bank of the river Isar in Munich when they spotted Steven L., a tourist from the eastern German state of Brandenburg, and chose to take offense at the man's eastern accent.

They hurled abuse at him, shouting: "Piss off you eastern pig, they should rebuild the Wall right up to the sky because of you."

After they had finished using the swan to hit the easterner, they went on to hurl bottles and even a barbecue filled with red-hot coals at their victim, who managed to escape with minor injuries.