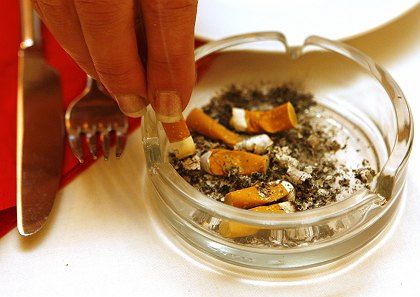 Just too tempting? Portugal's anti-smoking chief couldn't even last a day after a smoking ban was introduced.

The temptation to smoke can sometimes be overwhelming -- even when it is against the law. That much was apparent in Portugal in the early hours of New Year's Day when the country's top anti-smoking official was rumbled breaking a new smoking ban that had just come into effect at the stroke of midnight.

Antonio Nunes, president of Portugal's food standards agency, which is responsible for enforcing the ban, was photographed by the daily Diario de Noticias smoking a cigar at a casino on the outskirts of the capital Lisbon.

Instead of apologizing for the gaffe, Nunes told the paper he had not been aware that the anti-smoking law applied to casinos as well as cafes, restaurants and bars. But the Ministry of Health confirmed this was indeed the case. His answer: "We will have to look into what is in the law."

The Portuguese parliament voted in June to introduce the ban, and with fines of between €50 and €750 for those who break it. Its introduction is part of a new anti-smoking mood in Europe, with similar bans coming into effect in France and many parts of Germany on Tuesday.

The Portuguese rules are slightly more lenient than other countries. In pubs and bars that measure less than 100 square meters, owners can choose whether to be smoking or non-smoking. Bigger establishments will be required to impose the ban or open up separate smoking areas.

Neighboring Spain introduced a similar smoking ban two years ago and according to media reports on Wednesday this has helped 1.6 million Spaniards to kick the habit. The law prohibits all smoking at work and in public buildings and limits it in bars and restaurants.