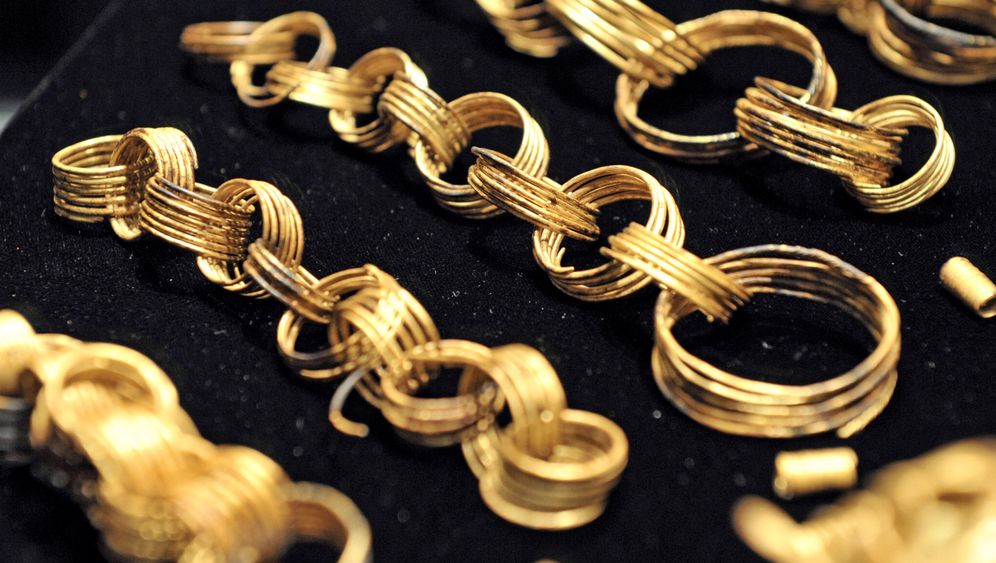 Archeologists in Germany have an unlikely new hero: former Chancellor Gerhard Schröder. They have nothing but praise for the cigar-smoking veteran Social Democratic politician.

Why? Because it was Schröder who, together with Russian leader Vladimir Putin, pushed through a plan to pump Russian natural gas to Western Europe. For that purpose, an embankment 440 kilometers (275 miles) long and up to 30 meters (100 feet) wide had to be created from Lubmin, a coastal resort town in northeastern Germany, to Rehden in Lower Saxony near the northwestern city of Bremen.

The result has been a veritable cornucopia of ancient discoveries. The most beautiful find was made in the Gessel district of Lower Saxony, where 117 pieces of gold were found stacked tightly together in a rotten linen cloth. The hidden treasure is about 3,300 years old.

The 1.8 kilograms (4 pounds) of gold, which was found in a field, consists of some jewelry, but primarily spirals of gold wire, which are tied together in chains consisting of 10 spirals each. This isn't jewelry, but an ancient form of gold bullion.

When Johanna Wanka, the Lower Saxony science minister, unveiled the treasure to the press in February, the story became even more surprising. She explained that testing done at the University of Hanover had revealed that the gold had come from a mine in Central Asia.

"Using a mass spectrometer, we examined more than 20 trace elements, allowing us to determine the fingerprint of the metal," explains chemist Robert Lehmann. "The gold vein must have been created deep in the mountains of Kazakhstan, Afghanistan or Uzbekistan over a period of millions of years."

Lower Saxony can now consider itself the owner of what Wanka calls the "find of the century." Merchants trading in luxury goods used to travel across the entire continent, says state archeologist Henning Hassmann. "Trips of 10,000 kilometers were nothing to them."

He suspects that the gold found in Gessel was initially brought in caravans from the mountains to the nearby Indus Valley, where a giant riparian culture flourished until about 1,800 B.C. From there, says Hassmann, the merchandise was sent by ship to Mesopotamia and, after that, somehow reached the northern flatlands.

But is that really the right explanation? Not everyone has faith in Lehmann's analysis of the gold. Some say that, despite the advanced testing equipment at his disposal, Lehmann is "inexperienced." Ernst Pernicka, an archeologist who studies ancient metallurgical processes in the southwestern city of Tübingen -- known for his groundbreaking metal studies on the famous Nebra sky disk -- calls Lehmann's conclusions "highly speculative."

Because almost nothing is known about ancient mining in Central Asia, Lehmann could only compare the Gessel find with a few Scythian gold coins. To arrive at such ambitious theories on the basis of such scant facts is "pretty bold," says Gregor Borg, an expert on gold deposits at the University of Halle in eastern Germany.

Despite the criticism, Lehmann remains undeterred, noting his use of first-class equipment. With these devices, he says, he can also perform confocal white-light microscopy and laser ablation ICP mass spectrometry. "We're counting individual atoms here," he says.

As audacious as the Asia connection seems, it could be true. There is plenty of evidence that human greed led to globalized trade more than 3,000 years ago. The ancient Egyptians' folding-chair designs reached Sweden, and magnificent Spondylus shells from the Mediterranean have been found as far away as Bavaria.

Valuable metals such as tin, copper, gold and silver were a favorite among long-distance traders, who dragged them across the continent in rucksacks or on oxcarts. Ötzi the Iceman, a natural mummy found in the Ötztal Alps, probably traded in gold and flint, and was murdered in the process.

But did the merchants' extensive trading networks reach as far as the remote mines in Central Asia as long ago as the 2nd century B.C.? It certainly would have been worthwhile. A massive gold-and-tin belt extends from the Altai Mountains to the Aral Sea. A prehistoric gold mine, the largest in the central Caucasus region, was also recently discovered in Armenia.

This could explain the origins of the myth of the Argonauts, who in the story sail through the Black Sea to steal the Golden Fleece.

Whether the treasure found inland from the North Sea coast truly originated in the faraway steppes remains disputable for now. Lehmann has invited his critics to attend a presentation in Hanover on July 13, when he intends to elucidate the details of his research. "It will be a closed meeting," he says.

Apparently Lehmann doesn't want anyone to lose face in the dispute over the prehistoric gold.