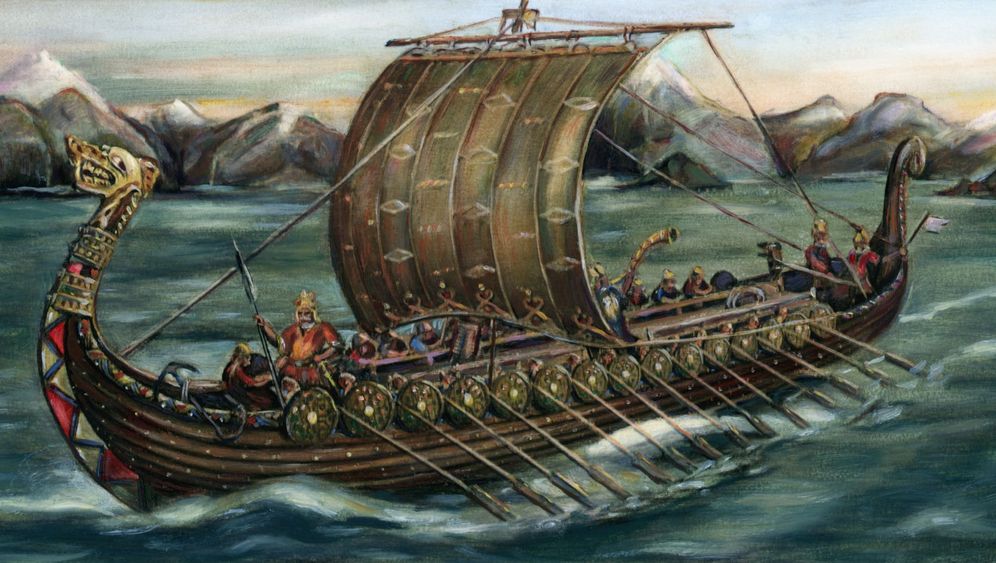 Photo Gallery: Why Did the Vikings Abandon Greenland?

On Sept. 14, 1408, Thorstein Olafsson and Sigrid Björnsdottir were married. The ceremony took place in a church on Hvalsey Fjord in Greenland that was only five meters (about 16 feet) tall.

It must have been difficult for the bride and groom to recognize each other in the dim light of the church. The milky light of late summer could only enter the turf-roofed church through an arched window on the east side and a few openings resembling arrow slits. After the ceremony, the guests fortified themselves with seal meat.

The marriage of the Icelander and the girl from Greenland was one of the last raucous festivals in the far northern Viking colony. It all ended soon afterwards, when the last oil lamps went out in the Nordic settlements in Greenland.

The descendants of the Vikings had persevered in their North Atlantic outpost for almost 500 years, from the end of the 10th century until the mid-15th century. The Medieval Warm Period had made it possible for settlers from Norway, Iceland and Denmark to live on hundreds of scattered farms along the protected fjords, where they built dozens of churches and even had bishops.

Their disappearance remains a mystery to this day. Until now, many experts had assumed that the cooling of the climate and the resulting crop failures and famines had ushered in the end of the Scandinavian colony. But now a Danish-Canadian team of scientists believes that it can refute this theory of decline.

From Farmers to Seal Hunters

The scientists conducted isotope analyses on hundreds of human and animal bones found on the island. Their study, published in the Journal of the North Atlantic, paints the most detailed picture to date of the Nordic settlers' dietary habits.

As the research shows, hunger could hardly have driven the ancestors of the Vikings out of their settlements on the edge of the glaciers. The bone analyses prove that, when the warm period came to an end, the Greenlandic farmers and ranchers switched to a seafood-based diet with surprising rapidity. From then on, the settlers focused their efforts on hunting the seals that appeared in large numbers off the coasts of Greenland during their annual migrations.

When settlement began in the early 11th century, only between 20 and 30 percent of their diet came from the sea. But seal hunting played a growing role in the ensuing centuries. "They ate more and more seal meat, with the animals constituting up to 80 percent of their diet in the 14th century," explains team member Jan Heinemeier, a dating expert from the University of Aarhus, in Denmark.

His fellow team member Niels Lynnerup, an anthropologist and forensic scientist at the University of Copenhagen, confirms that the Vikings of Greenland had plenty to eat even as the climate grew colder. "Perhaps they were just sick and tired of living at the ends of the earth and having almost nothing but seals to eat," he says.

The bone analyses show that they rarely ate meat from their own herds of livestock. The climate had become harsher on the island starting in the mid-13th century. Summer temperatures fell, violent storms raged around the houses and the winters were bone-chillingly cold. For the cattle that had been brought to Greenland, there was less and less to eat in the pastures and meadows along the fjords.

On the smaller farms, cattle were gradually replaced with sheep and goats, which were easier to rear. The isotope analyses show that pigs, valued for their meat, were fed fish and seal remains for a while longer but had disappeared from the island by around 1300.

The farmers, who had switched their focus to seal hunting, apparently did hardly anything to avert the decline of their livestock economy. The scientists' analyses of animal bones show that the Greenlanders didn't even try to help their cattle survive the long, icy winter by feeding them something of a starvation diet of bushes, horse manure, seaweed and fish waste, a widespread practice in regions of Northern Europe with similar climatic challenges until a few decades ago.

It also appears that epidemics were not responsible for the decline of farm life on the island. The scientists did not discover more signs of disease in the Viking bones uncovered on the island than elsewhere. "We found normal skeletons, which looked just like comparable finds from Scandinavian countries," says Lynnerup.

So, if it wasn't starvation or disease, what triggered the abandonment of the Greenland settlements in the second half of the 15th century? The scientists suspect that a combination of causes made life there unbearable for the Scandinavian immigrants. For instance, there was hardly any demand anymore for walrus tusks and seal skins, the colony's most important export items. What's more, by the mid-14th century, regular ship traffic with Norway and Iceland had ceased.

As a result, Greenland's residents were increasingly isolated from their mother countries. Although they urgently needed building lumber and iron tools, they could now only get their hands on them sporadically. "It became more and more difficult for the Greenlanders to attract merchants from Europe to the island," speculates Jette Arneborg, an archeologist at the National Museum of Denmark, in Copenhagen. "But, without trade, they couldn't survive in the long run."

The settlers were probably also worried about the increasing loss of their Scandinavian identity. They saw themselves as farmers and ranchers rather than fishermen and hunters. Their social status depended on the land and livestock they owned, but it was precisely these things that could no longer help them produce what they needed to survive.

Although the descendants of the Vikings had adjusted to life in the north, there were limits to their assimilation. "They would have had to live more and more like the Inuit, distancing themselves from their cultural roots," says Arneborg. "This growing contradiction between identity and reality was apparently what led to their decline."

In the final phase, it was young people of child-bearing age in particular who saw no future for themselves on the island. The excavators found hardly any skeletons of young women on a cemetery from the late period.

"The situation was presumably similar to the way it is today, when young Greeks and Spaniards are leaving their countries to seek greener pastures in areas that are more promising economically," Lynnerup says. "It's always the young and the strong who go, leaving the old behind."

In addition, there was a rural exodus in their Scandinavian countries at the time, and the population in the more remote regions of Iceland, Norway and Denmark was thinning out. This, in turn, freed up farms and estates for returnees from Greenland.

However, the Greenlanders didn't leave their houses in a precipitous fashion. Aside from a gold signet ring in the grave of a bishop, valuable items, such as silver and gold crucifixes, have not been discovered anywhere on the island. The archeologists interpret this as a sign that the departure from the colony proceeded in an orderly manner, and that the residents took any valuable objects along. "If they had died out as a result of diseases or natural disasters, we would certainly have found such precious items long ago," says Lynnerup.

The couple that was married in the church on Hvalsey Fjord also left the island shortly after their wedding. In Iceland, the couple had to provide the local bishop with written proof that they had entered into a bond for life under a sod roof according to the rules of the mother church. Their reports are the last documents describing the lives of the Nordic settlers in Greenland.