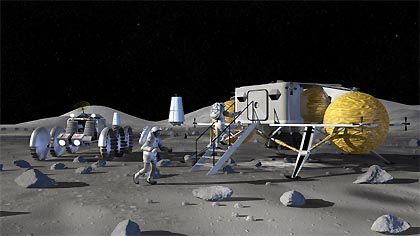 Lunar outpost or archive for humanity?

To protect against a nuclear bomb, a plague, a natural disaster, an asteroid collusion or some other doomsday event, scientists are lobbying to have a reserve library of human scientific and cultural achievements built and maintained on the moon.

Jim Burke, a retired long-time NASA expert now working at the International Space University in Strasbourg, France, warned that a doomsday asteroid or comet could annihilate global civilization and that something should be done to insure against the wholesale loss of human achievement.

Burke suggests a project to create a "lunar biological and historical archive," which would include samples and a record of human scientific and cultural achievements.

The idea for what Burke calls a "space-age Noah's Ark" is one shared by the Alliance to Rescue Civilization (ARC), which also seeks to include backups of Earth's biological heritage and diversity in a permanently manned lunar facility.

"In the event of a global catastrophe, the ARC facilities will be prepared to reintroduce lost technology, art, history, crops, livestock, and, if necessary, even human beings to the Earth," Ropert Shapiro, an ARC co-founder and biochemist at New York University, told the National Geographic News earlier this month.

NASA already has plans to establish a permanent outpost on the moon by 2024. It also has programs researching how to react to dangers posed by asteroids and comets using, for example, nuclear-tipped space vehicles.