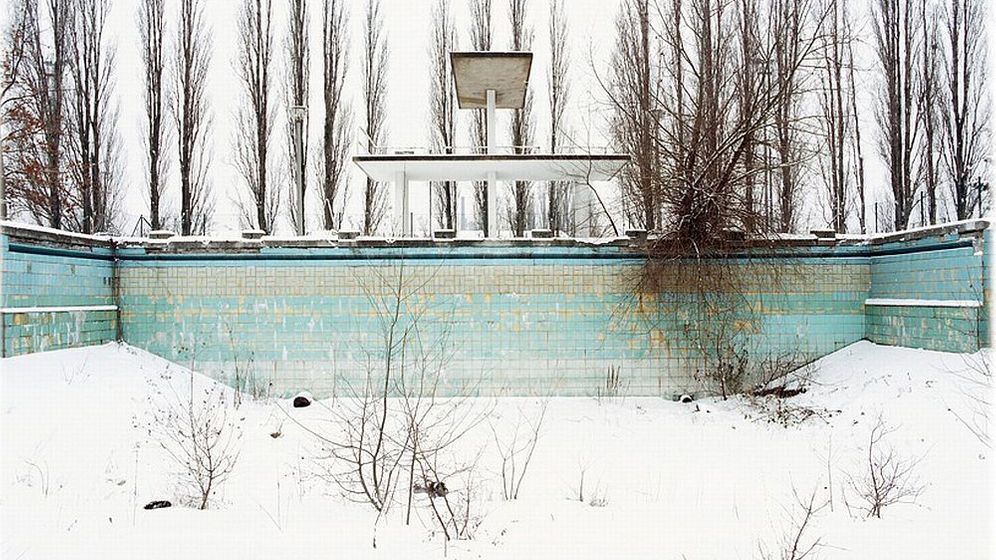 German artist Sarah Schönefeld was 10 years old when the Berlin Wall came down. In the two decades since, the buildings where she spent her childhood in East Berlin began slowly disappearing. Deeply affected by the process, Schönefeld revisited the places of her past over time with a camera to document the abandoned buildings and ruins. This served as the inspiration for a major photo series by the artist, an impressive documentation of dilapidation and loss. Her photographs often deal with issues surrouding memory. Some of her work is currently featured in a major Hamburg exhibition, "Lost Places. Sites of Photography."

SPIEGEL ONLINE: When did you realize that many sites that featured in your childhood in the former East Berlin neighborhood of Lichtenberg were disappearing?

Schönfeld: My kindergarten suddenly disappeared one day. It had given way to a supermarket parking lot. I saw that, and it affected me.

Schönfeld: I spent a large amount of time there because my mother was a single parent. And the (East German secret police) the Ministry for State Security was located around the corner. As a child I was naturally interested in it. What was the Stasi? I knew that our family, among others, was being observed because my grandfather was a pastor in an independent church. The Stasi was the almighty overseer, and its headquarters were so close to my kindergarten.

SPIEGEL ONLINE: Did your kindergarten then serve as the catalyst for your photo series?

Schönfeld: I have old photographs of my kindergarten that I like: A photo, for instance, in which I am dressed as a musical clef. After reunification, I returned time and again to my kindergarten, to see what kind of condition it was in. Over the years, I noticed that other places were falling into disrepair as well. At some point I took my camera along, and that's how this series came into being.

SPIEGEL ONLINE: How many places look now as you knew them from your childhood?

Schönfeld: Actually, not a single one. They have all either fallen into disrepair, been renovated or been torn down.

SPIEGEL ONLINE: Does their disappearance bring you down?

Schönfeld: I tried to say goodbye through my photographs. The places now live on in my photos and my memories. For me, their disappearance is similar to death. Of course, they are abstract buildings and not people, but I had a very strong connection to these places. It's similar to the feeling that overcomes you at a funeral -- that sense of astonishment that someone can simply just be gone.

SPIEGEL ONLINE: Which other places, apart from your kindergarten, still have meaning to you?

Schönfeld: The swimming pool for example. I spent many afternoons there during my summer holidays. I even became a competitive swimmer at the indoor pool. We would train two or three times a week. However I rarely took part in competitions, but stopped after a few years because my mother was very critical of it.

Schönfeld: The sports physician would give us shots. But it was unclear whether we were being given hormones to prepare us for future competitions.

SPIEGEL ONLINE: Your school also appears in your photo series. What do you associate with it?

Schönfeld: Perhaps "The Wall of the Best". In first and second grade I was the best student in the class. My photo wasn't on the wall, however, because I wasn't a member of the Young Pioneers (the East German youth movement officially promoted by the Communist regime). Of course I was very disappointed. I didn't really understand what it all meant at the time, and my mother wasn't able to offer a sufficient explanation either.

SPIEGEL ONLINE: But surely you realized as a child that the German Democratic Republic, the former East Germany, was a country that restricted its citizens?

Schönfeld: Yes. Even from a child's perspective, one gains experiences. A clear example is packages from the West. When we got a package from relatives in the West, it was a highlight, even if the contents were from the discount store. A jar of Nutella was sacred, and would last for a year. We once had a break-in -- money and valuables were left untouched. Only the things from the West disappeared: shampoo and sweets.

SPIEGEL ONLINE: Kindergarten, school -- these are places, that most people associate with their childhood. But you also photographed the Palace of the Republic, the GDR's parliament building. How does that fit in?

Schönfeld: Many cultural events used to take place there. I was always there for children's concerts. At the time, I thought it was chic. With all the lamps and the carpets, it was something special. That's not the only reason why I feature the building in my series though. I wanted to establish a link between the personal and the "official" histories.

SPIEGEL ONLINE: Many of your other works, such as those on Auschwitz, Siberian gulags or legendary Berlin clubs, revolve around historical places. What draws you to the past?

Schönfeld: Everyone is confronted by things in life that can suddenly turn everything upside down. In my life that was reunification. Something like that creates an underlying insecurity that needs to be processed. Historical awareness is also tied in with the question of the future. In my opinion, it is better if one knows, from where one comes, to have a better idea of where one wants to go. It was only during my studies that I realized how much the past fascinates me.

SPIEGEL ONLINE: Is that why you became a photographer?

Schönfeld: No, it's not that simple. But photography is a medium that has been telling human stories for over 150 years. Today, we are closer to those photographs than paintings. That interests me greatly. I never planned my career. Instead, I became more heavily involved with the medium. And I can still say that analog photography continues to draw, fascinate and amaze me.