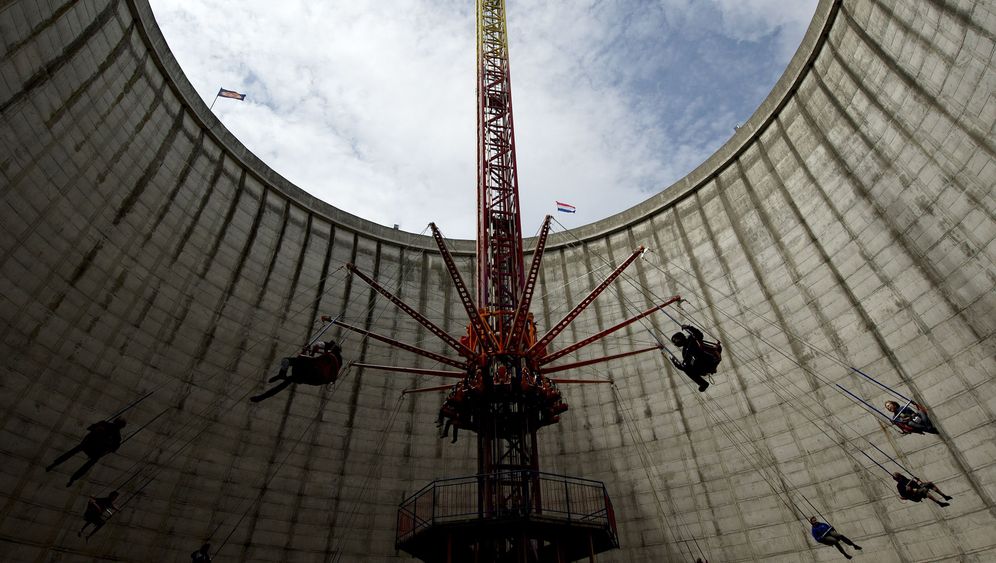 "We're headed toward the reactor core," the man says before marching forward past the plastic plants. On the right is the men's room; on the left a cigarette machine and a digital scale. The plush blue carpet drowns out the sounds of our footsteps. He then pulls a key from his pocket and opens a brown fire door. "I'll go first," he says. Once inside, he turns around and adds: "Be careful!"

Inside, there is a dim light and unadorned reinforced concrete everywhere you look -- left, right, up and down. The walls are as thick as three people standing shoulder-to-shoulder. It smells like someone is welding somewhere inside.

The building's central section is a monstrous ball of steel. Though it is only dimly lit, you can still make out portholes and rusted metal. Very little of the shiny, high-tech German gadgetry has been left behind here in the heart of this complex near Kalkar, a town in the western German state of North Rhine-Westphalia lying close to the Dutch border. It used to be known as the "fast breeder" nuclear reactor SNR-300 and, at one point, it was the most technologically advanced nuclear power plant in the world. In its current condition, though, it looks more like a World War II bunker.

A Boondoggle Worth Billions

Han Groot Obbink, an agile 50-year-old Dutchman, calls out to the world on the other side; the world of today. The door opens and we walk outside as if returning from a trip back in time. All of a sudden, music blasts out of the loudspeakers, children scream and our noses are filled with the smell of food. "Just a little more paint on the walls and a bit of decoration and the hotel will be finished," Groot Obbink says.

Of course, not everything has been quite that simple. And no one knows this better than Obbink, who has been working as the complex's general manager for the past 15 years. What is now known as Kernwasser Wunderland, or "Corewater Wonderland," has been part of an unprecedented industrial metamorphosis, like something straight out of science fiction. As far as the Germans are concerned, only a Dutchman could buy a nuclear power plant and transform it into an amusement park.

The complex in Kalkar wasn't just any old nuclear power plant, but rather a multi-billion-deutsche mark national symbol-turned-boondoggle. After initially being touted as proof of the ingenuity of German engineers, it then went on to symbolize the power of youthful resistance and, finally, the absurdity of political decision-making. Indeed, after being built for 8 billion deutsche marks (€4.1 billion; $5.9 billion), the complex known locally as "der Brüter" ("the breeder") was destined never to go online. In the wake of the Chernobyl disaster, it stood idle for years because nobody wanted to have anything to do with the enormous mountain of concrete. The plant went into partial operation in 1985, but it never received nuclear materials.

Then everything changed. Karl-Heinz Rottman, 57, a former employee, recounts how he and his colleagues were just about to eat lunch together in 1995 when Dutch developer Hennie van der Most drove up. At the time, Rottman says, morale among the workers was low and they were full of disappointment. But then this white-haired man got out of his black Mercedes and said: "Hi, I'm Hennie. I'm gonna buy everything here." Rottman says his first thought was: "Sure, go for it."

And that's just what Hennie did. The son of a farmer and junk dealer from rural Holland borrowed a couple of million deutsche marks to buy the nuclear power plant that had been heralded as a source of infinite energy for the industrial age. Its uranium core was supposed to produce more plutonium than the reactor needed, meaning that it could forever produce energy that was as clean and safe as possible.

But instead of getting the reactor up and running, Hennie began to gut the place. Massive amounts of circuitry, pumps, turbine and other equipment landed on the trash heap. The engineers who had settled in the area could hardly bear to watch as their creation was destroyed. And the job was massive -- in order to be able to respond to worst-case scenarios involving multiple failures, nuclear power plants have three and sometimes even five sets of duplicate back-up systems. Even now, 15 years later, only a third of the reactor has been converted into amusement park.

But it's still very impressive: The park has a 437-room hotel, four restaurants that can seat 2,000 diners, seven bars, a bowling alley, a go-cart track, a roller coaster, minigolf, tennis, a trampoline, carousels, a Ferris wheel and enough soft drinks and ice cream to keep all the kids happy. Indeed, as the company literature in the proton accelerator boasts, the park is "all inclusive."

That in itself has attracted plenty of criticism for the park, as not everyone likes these kinds of all-inclusive places. Kernwasser Wunderland has been dubbed the world's largest all-you-can-eat joint, and the German daily Süddeutsche Zeitung dismissed it as "a poor man's Disneyland."

But the nuclear wonderland wants to be much more than that. It aims to be both an urban party mecca for the young and a quaint outdoor paradise for retirees with everything from tractor pulls to cheesy music parties playing the oldies. "We want it all," says Groot Obbink. And now a site that used to be closed off to the world sees up to 600,000 visitors a year.

It may very well be a blueprint for the future. Groot Obbink stands alone in the complex's museum thumping his finger on a display table full of red dots. Each one represents a nuclear power plant in Europe. There is a sea of red dots covering France.

When asked about all the commotion in Germany surrounding nuclear energy that was triggered by the disaster in Fukushima, he says that it hasn't really affected the business much. Pointing at the maps, he says: "Look here. We're even building another one in Holland now, too."

Perhaps, then, there will be the scope to convert more former nuclear power stations into amusement parks. Either way, Groot Obbink doesn't believe that Germany's recent about-face in deciding to phase out nuclear energy by 2022 was necessarily rash. "I don't really care either way," he says. "I only know that if we have a power outage, I have a problem. And it also won't be good if it gets more expensive."

Indeed, it does seem ironic that what was originally designed to be a source of endless energy has now turned into a massive power consumer to the tune of 3 million kilowatt hours and 550,000 cubic meters of gas each year. In fact, this has even made it necessary to find a way to produce more energy for Kalkar. Groot Obbink says there are plans to erect a wind turbine and perhaps even a plant generating energy from biogas.