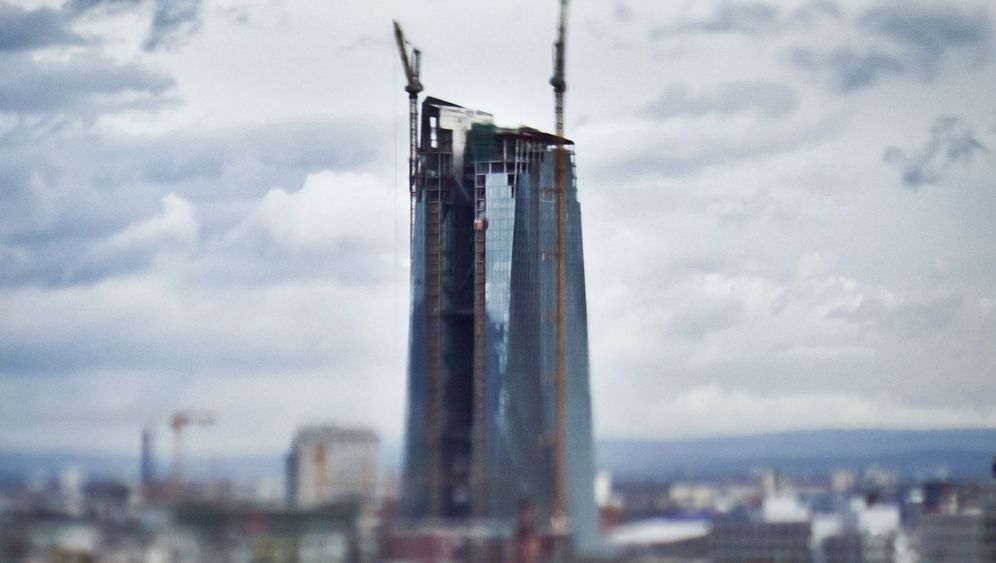 Everything will be fine, everything will be good and no one needs to worry about the euro anymore. From now on, the extraordinary Lionel Messi will solve any crises using one of those typical Messi moves, an unexpected movement that fools his opponents on the soccer field -- first Dante or Hummels, but soon the financial markets too -- as Messi dodges left, darts right, then scores. And the euro wins, 3-0!

Why Messi? Because it is the soccer player's spirit that will infuse the new headquarters of the European Central Bank (ECB). And because everything is connected. And because the building is designed by Wolf D. Prix, co-founder and CEO of the architectural firm Coop Himmelb(l)au. Prix is an Austrian, a native of Vienna, a wily old fox, an architect who by his own admission "built absolutely nothing" for years but now is constructing Europe's most important building.

The ECB headquarters were still one big construction site last week in rainy Frankfurt, with cranes looming above the building's two towers, which will stand at 185 and 165 meters (607 and 541 feet) respectively. The building still lacks both its outermost layer and its interior fittings. Next year, though, when the ECB moves in, the Messi-style fiscal policy can begin.

Prix's studio is located in a former working class neighborhood in Vienna. There is no luxury here and there are no decorations. Being here feels like being in a natural history museum from another world and another era, perhaps in a wing specifically devoted to genetically modified armadillos and other such beings -- silvery, scaly, shell-bound creatures that crouch on their stands and tables. In reality, of course, these are not futuristic species, but rather architectural models of the buildings Coop Himmelb(l)au designs. The materials of choice here are steel and glass, and the shapes can be just about anything as long as they're not boring squares.

Wolf Prix, 70, in a quilted jacket and scarf, with glasses hanging from a chain around his neck, has hair as silver as the shells of his architectural armadillos. A first question, a first answer, and then Prix is off and running. He speaks well, but endlessly, in a great stream of words that branches and meanders, seeking the sea but never quite finding it.

His central theme is the way everything is connected. Prix has grand theories on this subject, and they start with Formula 1. When Lotus built its revolutionary 72 model, a race car with an extremely lightweight construction, that development had an effect on other areas as well, for example in architecture, which likewise began to break free of its heaviness, becoming lighter.

The Lotus 72 attained notoriety primarily because Austrian race car driver Jochen Rindt died in a crash in it. The brake shafts were too light and one snapped during a practice session in Monza. Prix loved Rindt. He still loves lightweight design.

Another example that can be plucked from this meandering river of words is space travel. True lightness began with space flight, which Prix believes in turn inspired the Lotus 72, because, of course, these things too are connected. Space travel introduced the most extreme form of lightness possible to human thinking and life -- weightlessness.

Prix says space travel also introduced the idea of protection -- symbolized by astronauts' full-face helmets -- which then logically enough turned up in Formula 1 racing as well. And in architecture, too, Prix says, the protective aspect of buildings became an important topic. Weightlessness, he adds, can best be seen in the Le Corbusier chaise lounge, which emulates the lying/floating position of astronauts in their space capsules. "That's not a coincidence," he says.

Now, it would be possible to do a little research and find out that Le Corbusier designed his chaise lounge in 1928, at a point when space travel was nothing more than a utopian vision. But it would be petty to seek to correct Prix with that fact. In his reflections on the world's great interconnections, time doesn't follow a strict line, with each day following obediently after the last. This is more about concept than reality.

Inspired by Sports and Freud

Prix used to play goalie in pick-up soccer games. At the time he supported Rapid Vienna; now he supports Borussia Dortmund and FC Barcelona. He's very willing to let sports inspire his work. When he noticed, for example, how some boxers switch stances mid-fight, he thought that approach could benefit architecture as well. He's not the first person to hit on the idea of integrating flexibility into work processes, but no one tells as good a story about it as Prix does.

All this, though, is only a preamble to talking about FC Barcelona and the ECB.

He saw that speed, that beauty, that efficiency, and he wondered why his firm couldn't work the same way. He'd had enough of lengthy decision-making processes. What he wanted now was that fast-paced short pass strategy, followed by a Messi move and the goal. Although, he adds, here there's also a connection to Sigmund Freud.

Being from Vienna, Prix says, he "trained in the Freudian school of thought." Now it all gets a bit complicated, but it can be summarized, in a simplified form of course, as follows: Freud was concerned with feedback, and what are short give-and-go passes if not constant feedback? Seen in this light, Barcelona's playmaker Xavi is the Freud of modern soccer.

Prix shows an organizational diagram of his firm, and it truly does resemble the positions of a soccer team, with the defense, midfield and strikers. The idea, he explains, is that two people should work together closely, exchanging short passes -- Iniesta to Xavi, Xavi to Iniesta and so on in the Freudian manner -- until a third person comes along and does a Messi. Prix particularly likes to be the one to do the Messi.

Here's how that process played out in the case of the European Central Bank: Through a series of short passes, the firm developed a basic design for the building, which consisted of a tall cuboid form, twisted around itself. But the design was still lacking that moment of insanity, a moment of absolute freedom in both thought and play -- a Messi moment. Someone -- here Prix doesn't say who -- had the idea to make a slanted slash through the building from top to bottom, then to raise one half above the other, rotate it around its long axis and set it back down. "A typical Messi move," Prix says.

At the end of this round of passing, the ECB headquarters had two towers connected by "hanging gardens," just as Babylon had. The basic, cuboid shape is still recognizable, lending the building a serious air fitting for an institution such as the European Central Bank. At the same time, the slash and the rotation give it something playful, something light.

It could well be that this particular "Messi move" actually occurred before Messi himself got big, but a slavish devotion to timelines is far from the point here. There's no doubt Messi's spirit will be present in the ECB. What's perhaps worth noting, then, is that this is the spirit of someone from Argentina, a country accustomed to excessive national debt, hyperinflation and currency devaluation. It seems it would be best if the spirit could leave those aspects out of it, and stick to the qualities of inspiration and accuracy. Perhaps Freud will be able to help here too -- for example, if the financial markets grow hysterical once again.

Prix's father was also an architect. The elder Prix built smaller, more conventional buildings, but the younger Prix was strongly influenced by the 1960s and the spirit of shaking off the old and liberating oneself.

He founded Coop Himmelb(l)au together with two partners in 1968, a time when every aspect of society was seen as relevant, from love to travel to construction. This is the school of thought that informs Prix -- that it is less about spaces in a society, but rather about a society in which one thing is always dependent on another.

In 1970, Prix and his partners set off 60 explosive charges to create a temporary space defined by dust and smoke. Their "City Soccer Vienna" action involved wandering the city's pedestrian zones in inflatable suits, urging passersby to play with enormous balls. They built their "House with the Flying Roof" and were great at formulating theories, but received few contracts.

It wasn't until the 1990s that business began taking off, and not until 2000 that Prix became involved in major projects, such as designing the new BMW World in Munich. That building now sits in the city as if it were one of those genetically modified armadillos, brought back from the future to rest here. It's an exotic construction, but also a startlingly beautiful one, more sculpture than building. It breaks with Munich's usual timeline, pulling the city further away from its contentment with tradition and setting it on a path toward the future. It's Messi in Munich.

Prix is not yet satisfied with his architectural implementation of the FC Barcelona process. He even talks like a soccer coach. "The short passes aren't really working yet," he says. "They need to be internalized in the sequence of movements." He also feels "automation" is lacking.

But he's working on these things. He watches soccer, he jumbles different time periods together, he waits for that moment of insanity and has a few ideas along the way -- and the world is more beautiful for them, in Munich, in Frankfurt and soon in Lyon as well.