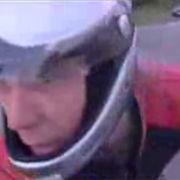 Police are looking for this guy.

The video seems like it could come straight out of a Jackass sequel. A helmeted man in a black and red bodysuit tears along the Ulm-Stuttgart autobahn in southern Germany -- on a skateboard. Click replay on YouTube and he does it again, accelerating by holding on to the back of a motorcycle before letting go and bombing down a steep hill at speeds of over 100 kilometers per hour (60 mph).

But it's not just thrill-seeking desk jockeys who have been repeatedly clicking into the video. German police have also taken an interest. And they are tying to track down the skateboarder with the help of the movie and fine him for breaking motorway laws and for endangering motorists.

According to a report in the Stuttgarter Nachrichten, the video -- filmed largely by a cameraman sitting on the back of the motorcycle but which also includes shots from numerous chase cars and what seems like a camera in the skateboarder's helmet -- appeared online in June. The police didn't become aware of it until weeks later. The stunt was broadcast by German television networks on Wednesday, once the media learned of it.

Many German autobahns have no speed limits, but the skateboarder picked a stretch in Göppingen, near Stuttgart, with a speed limit of 80 kilometers per hour. Police are looking to slap a speeding fine on the skateboarder, who they believe is professional stuntman.

"We put out an all-points bulletin and have received information that gives us useful clues as to who the man may be," Goeppingen police spokesman Uli Stöckle told Reuters. "We are particularly concerned about copycats who may imitate the stunt, putting their lives at risk."

When asked by SPIEGEL ONLINE to confirm a report that police had managed to find one of the cars that accompanied the stunt, Stöckle had no comment.

The official world record for skateboard speediness -- excluding those who have rocketed along while holding on to motorcycles and other vehicles -- is held by Gary Hardwick, according to the Guiness Book of World Records. Hardwick hit a downhill speed of 62.55 miles per hour during a race in Arizona.