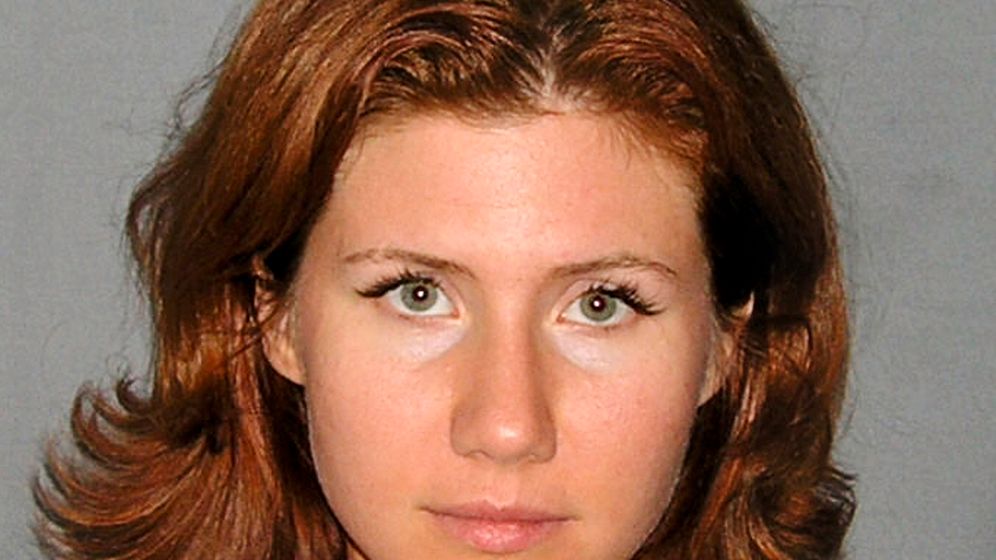 The Starlite is in a small park in downtown Moscow, a two-minute walk from the monument to legendary poet Vladimir Mayakovsky. The restaurant serves steak and french fries, and the wall is decorated with Life magazine covers from the 1960s and a license plate from the US state of Michigan. CNN flickers on a TV screen.

Anna Chapman, the spy with the Bond-girl image, has selected a restaurant for lunch that reminds her of her former life, of the four exciting years she spent in the United States before the FBI arrested her in June and exchanged her for American spies in Russia.

The Starlite is a little bit of Americana in the middle of Moscow, and a popular meeting point for people who are at home in more than one world. A Syrian with an American passport is ordering a hamburger at one of the tables. Western intelligence agencies believe he is the right-hand man of Viktor Bout, a notorious arms dealer. The Starlite has the reputation, not unjustifiably, of having been thoroughly bugged by Russian intelligence.

Hands Off Our Anna

Chapman is sitting in the far corner of the terrace. She is wearing a tight-fitting dress, and her face looks pale in contrast to her red hair. She sits with her back to the room. "I wear sunglasses and a hat on the street," she says.

And with good reason. Russia has been consumed by a Chapman cult since her return. The tabloids print page after page of love confessions by her previous boyfriends. In her hometown of Volgograd, known as the "City of Heroes" for its role in World War II, members of the city council have proposed making the 28-year-old an honorary citizen.

The local newspaper is sponsoring a contest for the most beautiful song written for Anna. The lyrics of the frontrunner are: "America is spying on everyone, and its enemies cannot sleep in peace. They're looking for bin Laden, but what does our girl have to do with it? Hands off our Anna."

A Face for Anti-American Sentiment

Chapman has become a fetish for a resentful nation, embodying most Russians' deep dislike of the United States. Most of all, the Anna cult helps to gloss over the severely battered reputation of Russia's intelligence agencies, which are infected by the same ailments afflicting the entire country: nepotism, corruption and greed.

The head of Russian foreign intelligence, for example, spends his weekends relaxing at a country house on a 10,000-square-meter (roughly two-acre) property. His annual salary of €140,000 ($178,000) is hardly sufficient to pay for the estate or, for that matter, for his 587-square-meter (6,300-square-foot) apartment in Moscow. Russians are very familiar with these figures, because President Dmitry Medvedev has forced the heads of the intelligence agencies to disclose their assets.

Anna, looking self-conscious as she sits in the Starlite, personifies the country's misery. She is no master spy, no creation of the KGB, feared, in part, for its efficiency. She is an attractive intern, not a warrior.

"My website will be up and running soon," she says. "The contact information for my PR people will be listed there. I am not permitted to talk about my time in America." Her handlers are probably the ones who issued the instructions.

But they apparently did not bar her from capitalizing on her story. She has already posed for the celebrity gossip magazine Zhara ("Heat") in Moscow's Baltschug Kempinski Hotel.

The publisher characterizes the photos as "revealing," and promises that "Anna's mysterious eyes will drive men to distraction. Next to Mata Hari, Anna is simply the spy with the greatest sex appeal."

Zhara is owned by News Media Russia, the country's most successful tabloid publisher. An associate of Prime Minister Vladimir Putin holds the majority stake in the company.

Welcomed by Putin With Open Arms

Putin, himself a former agent, warmly welcomed Chapman and the other nine spies expelled from the United States, and even sang old fighting songs with them. There is speculation in the media over whether Chapman will run for office in next year's elections.

She wouldn't be the first agent to land a seat in the Russian parliament, the Duma. Andrey Lugovoy made it to second place on ultra-nationalist Vladimir Zhirinovsky's list of candidates for the parliamentary elections. Lugovoy is believed to be one of the suspects in the murder of Alexander Litvinenko, a former Russian agent who defected to the United Kingdom and was poisoned with radioactive polonium-210 -- charges that Lugovoy, of course, denies.

Anatoly Korendyasev, the deputy who represents Chapman's native Volgograd in Putin's United Russia party, is about to retire. Chapman, it seems, would be an ideal replacement, because the seat would remain in the family, so to speak. Korendyasev was also an intelligence agent; in fact, he even held the rank of general.

Political scientist Andrey Mironov has proposed establishing a Chapman museum at her former school. Tatyana Badyeshko, the principal of High School No. 11, remembers her most prominent former student well. She says that she was a respectable girl, but -- as one would expect -- with a thirst for adventure. "Perhaps that's what drove her to get involved in these spy games," says the principal. "But everything Anna did was out of love for her fatherland."