For over eight decades it was just a tantalizing El Dorado for film historians, but on Friday night a restored version of "Metropolis," Fritz Lang's silent masterpiece, returned to Berlin. Over 2,000 people turned up on a snowy night in Berlin to watch the film projected onto a screen in front of the Brandenburg Gate, with an orchestra performing the original score in a simultaneous broadcast at a theater across town.

The event was the highlight of this year's Berlin Film Festival, marking the return of one of Germany's most influential films to the city where it made its debut 83 years ago. When the sci-fi classic was first shown in 1927 there was huge anticipation about what was then the most expensive German film ever made. But the 150 minutes of idealism and dystopia were a flop with critics and the public alike, despite the ground-breaking techniques and futuristic vision. 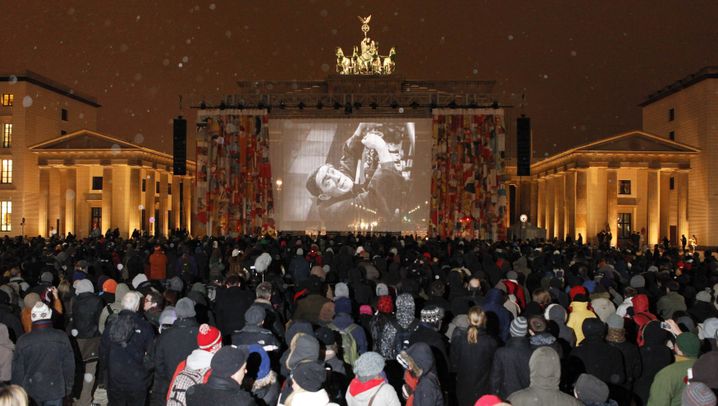 Once the US distributors got their hands on "Metropolis" they lobbed off a quarter of the film, making it all but incomprehensible in the process. While that did little to redeem it at the box office in the 1920s, the film went on to become an icon of German cinema and a reference point for many future sci-fi films from "Blade Runner" to "The Fifth Element."

The story tells of a towering city of the future, where the idle rich enjoy their decadent pleasures while the workers toil beneath the ground. However, once Freder, the son of the ruler of Metropolis falls in love with a proletarian prophet Maria and a mad scientist, Rotwang, creates a robot in her image, chaos ensues. Finally Freder secures a reconciliation between the workers and the elite.

Yet Lang, who fled to Hollywood after the Nazis came to power, wanted nothing to do with the bowdlerized version of his film. "Why are people always asking me about a film that doesn't exist?," he would plead.

For decades the prospect of recovering the missing sections obsessed many a film archivist and historian. Then, in 2008, the miracle happened. A long version of the film was discovered in the cinema museum in Buenos Aires. The 16-milimeter copy was severely damaged but film historians were able to ascertain that it contained most of the missing original scenes.

The Murnau Foundation, based in the German city of Wiesbaden, then set about the painstaking work of restoring the film. And it was the original score that helped historians to ascertain how exactly to reconstruct the film.

"The most important sources were the Argentinean version and the score," Anke Wilkening, the chief film restorer, told SPIEGEL ONLINE. She explained how the sheet music contained notes on particular events, such as "explosion" or when a new character appeared. "And the music itself was full of gesture, so that the movement on the screen is also in the music itself."

Frank Strobel, who conducted the Berlin Radio Symphony Orchestra at the gala performance on Friday, explained how important Gottfried Huppertz' original score was for reconstructing the film. "The music played a big role in the making of the film. During the writing of the script there were discussions about the music." He pointed out that the original score was "the only original document that we have from 1927."

Strobel was closely involved in the restoration work, which took a year to complete. Although the film is now close to its original version, there are still a few minutes missing. And the newly inserted scenes are still very apparent because it was difficult to deal with the damage to the original 35 milimeter film that had been copied over to the smaller 16-milimeter negatives. "We couldn't work a miracle with such extreme damage," Wilkening says.

Martin Koerber, of the Murnau Foundation, says that the restoration shows that "Metropolis" can no longer be "misunderstood as a science-fiction pioneer film." For Wilkening the elements of sci-fi and horror that made the film such a cult classic are pushed into the background in the newly restored version.

Wilkening says that the theme of friendship has now returned, through the reinsertion of three important male characters. Josephat, a former assistant to Metropolis ruler Joh Fredersen, Georgy, a worker who Freder changes places with, and a spy The Thin Man, are much more prominent in the restored version. "With these characters Lang tells the story of a friendship, betrayal, loyalty -- all themes that reappear in his films."

Chief restorer Wilkening says that in the shortened version, the film was pared down to simplified themes of sci-fi and boy meets girl. "It was the American way of storytelling to reduce a film to a central story line," she explains. "But we knew from the sources that Fritz Lang's film was far richer and contained much more."