Craig Calfee is known as the Zen master of bamboo-bike builders. In his workshop on the Californian coast, only a hundred meters from the tumultuous waves of the Pacific Ocean, the frame designer builds breathtaking bikes out of the fast-growing plant, the largest member of the grass family.

But the American, who has become well known for making bikes out of plant materials, has some competition. The number of experts who are making bicycles out of renewable raw materials is growing. Among them are Brano Meres, an engineer from Slovakia and professional cyclist Nick Frey also from California. German engineer Nicolas Meyer is also working along this line, but not with bamboo. Instead he has built a triathlon bike out of hemp. 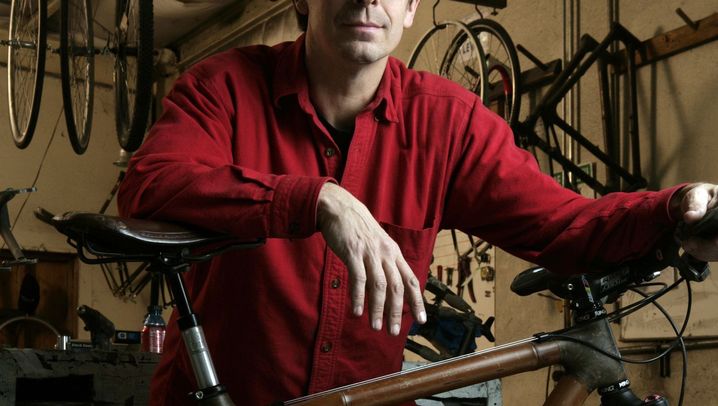 Still, Calfee is an old hand among all of these newcomers. Before this latest venture he was long known as an elite bike builder, having pioneered carbon fiber, custom models for riders like Greg LeMond, a three time winner of the Tour de France. Then, in the mid 90s he was looking for an idea that would attract attention at a bicycle trade fair. But he wanted more than just a nice idea. He wanted something that would make the general public who came to his stand stop and stare.

It was actually his dog that gave the brainwave. While the pitbull-labrador cross was playing he got hold of a piece of bamboo. When the dog let the piece of bamboo go, Calfee picked up the stick and saw that it was virtually unscathed. What a fantastic material. Calfee found the idea electrifying. He had found what he was after: the bike he was making for the trade fair would have a bamboo frame.

Bamboo Bikes are a Much Smoother Ride

Bamboo is native to all of the earth's continents, including North America and for the new bike prototype Calfee used Californian bamboo. The frame was a little too flexible but it fulfilled its primary purpose: getting a lot of attention.

After the trade fair Calfee withdrew to his workshop and began to experiment with bamboo in earnest. As environmentally friendly and sturdy as the material was, it also had its flaws. One of the biggest disadvantages was that it split easily, down the middle. To solve this Calfee smoked the bamboo and also tempered it with heat. (Today the bamboo has to go through a four- month process before it can be used.) He also coated hemp or carbon fibers with epoxy resin and used them to bind the bamboo tubes together.

Around a hundred frames later, Calfee had finally built a bamboo bike frame he could believe in. His verdict: The vibration absorption of the bamboo frame was better than that provided by a carbon fiber frame. "The bamboo bikes are a much smoother ride," he says. He also found that the bike had impressive impact resistance and was tougher than carbon fiber and less prone to fracturing. These results were confirmed after the bamboo frames were tested at the EFBe bicycle testing laboratory in Germany. But such hardiness has a price -- a mountain bike frame made out of bamboo will set the average rider back around $2,700 (€1,879).

In the meantime, Calfee has also won a number of prizes for his bamboo bikes. Among them, "Best Road Bike," "Best Off-Road Bike" and the "Peoples' Choice Award" at the North American Handmade Bicycle Show. On his Web site Calfee himself writes that if there were a prize for the bike with the lowest carbon footprint, one of his bamboo bikes would win it "hands down."

And if you think that such modes of transport were something reserved for well heeled Californians with an environmental conscience, then you would be wrong. Calfee has found a whole new area of operations for his bamboo bikes: Africa.

"In developing countries bicycles are an enormously important for transporting goods and going to school or to the market," he says. And the big advantage that bamboo bikes have over steel bikes is that the raw materials to make them are growing right there.

Calfee founded Bamboosera, an initiative supported by, among others, the Earth Institute of Columbia University, which supports sustainable development benefiting the world's poor. The Bamboosero project endeavors to teach locals in developing nations how to make their own bicycles with the long term goal of eventually founding a bicycle-making business.

In February 2008 Calfee helped teach three groups in Ghana the basics of bamboo bike frame building. There are now several projects ongoing in that country. And further projects are planned, everywhere from Uganda and Liberia to the Philippines and New Zealand.

And Calfee's latest project is even more ambitious: The bamboo school bus bike. The plan is for the bike to have an adult steering and six or seven children onboard -- and everyone has to pedal.

Back home in the US, Calfee has some competition from Nick Frey, a Princeton engineering graduate and cycling champion. During his studies Frey spent two years developing his own bamboo bicycle frames and together with four fellow engineers, established a company selling the bamboo bikes, Sol Cycles in Princeton. Frey has since gone on to form another company, Boo Bicycles in Colorado, also specializing in bamboo bikes. And then there are other firms like Daedalus in Portland, Oregon, where they have been making bamboo cycles since 2005.

Other nations are also getting in on the bamboo action. Danish design firm Biomega, who espouse "a responsible corporate culture" make a very good looking bamboo bike and there is an ongoing project at the Technical University of Berlin developing similar bicycles called Berlin Bamboo Bikes. Engineer Nicolas Meyer's project is based in Osnabruck in the German state of Lower Saxony. Meyer has gone one step further and come up with one of the world's first hemp bikes. He founded his company, Onyx Composites, which specializes in light construction projects and the use of sustainable raw materials in 2008. But as part of his more creative work -- and his need for a new bike for triathlons -- Meyer has come up with the prototype for a bicycle made mainly out of hemp and bamboo. This, as well as his other work, saw him named Osnabruck's "Best Business Newcomer 2009" last August.

Meyer's mix of raw materials is particularly interesting. He gets his hemp in bulk from a hemp store and his bamboo comes from a florist. "Sixty percent hemp, 15 percent bamboo and the rest is carbon and aluminum," Meyer explains. To make the bike Meyer dips the hemp fibers into a thermal epoxy resin and then wraps them around a Styrofoam frame. And the slightly clunky-looking frame can be explained by the materials. "If you want to understand the frame you need to think of it as a series of hemp ropes," Meyer says. The ropes can take a lot of weight. But when there's pressure they bend. To ensure that the saddle mounting, which is made up of two tubes, doesn't get bent out of shape there is a three-centimeter wide band around the tubes.

And with the tubes that make up the bike measuring anything between 3.5 and 10 centimeters in diameter, this bicycle is a far sturdier proposition than any carbon fiber model or even a bamboo bike. The bigger tubes make the bike more rigid. But this doesn't make the bike frame any heavier. It still weighs around 1.4 kilograms which is approximately the same as a good aluminum bike frame.

"A triathlon bike is never comfortable," Meyer admits -- even though his hemp bicycle is apparently far more comfortable, and dampens vibrations, far better than his old bike frame. Still, that doesn't sound like it would have been too difficult -- his old bike was 30 years old and made of steel.