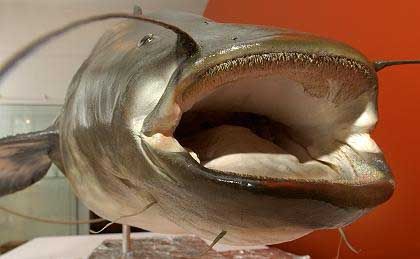 A wels catfish on display in a Mönchengladbach museum: Berlin bathers are terrified of a giant catfish said to be living in a local lake.

After cooling off from the summer heat in one of Berlin's many lakes, a young German woman now has a 17-centimeter (6.7-inch) bite to show for it. Local animal experts suspect a giant catfish lies behind the attack and swimmers are now avoiding the lake out of fear of being bitten.

"We were in the water and just swimming around," Katharina Saxe told television station Rundfunk Berlin-Brandenburg (RBB) Monday. "Then (my friend) asked me if I'd felt it, too. And that's when it latched onto my leg. It felt like a bite. We bolted away. And then it started bleeding, too."

Saxe was swimming in Schlachtensee, one of many small lakes around Berlin's Grunewald forested area, when the incident happened. She was taken to a hospital where she received minor treatment for a 17-centimeter-long (6.7 inch), crescent-shaped bite on her calf. The RBB footage shows countless pinprick-like red marks on Saxe's leg, rather than any deep puncture or laceration wounds.

And Katharina is not alone. Jonas Wegg, a teenager who lives near the lake, was recently swimming at night when he had an unpleasant underwater encounter. "I was suddenly bitten on my right calf," Wegg told the mass circulation daily Bild. "I only felt something huge and slippery. It was a shock."

Reports like these have apparently led many swimmers to stay on dry land. "We don't go in the water any more," Berlin student Stephanie Kahl told Bild. "We just stay near the shore, where the catfish can't go."

Susanne Jürgensen, the head of Berlin's fisheries department, told RBB that, based upon the shape of Saxe's bite, the culprit was most likely a wels catfish. The species has a large, broad mouth with very small teeth. 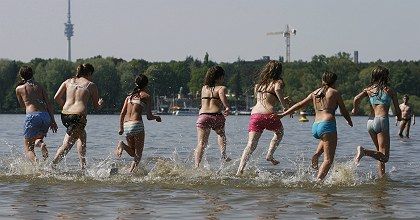 Bathers at Wannsee lake in Berlin: Swimmers are avoiding the nearby Schlachtensee lake.

Jürgensen estimated that Schlachtensee has a dozen such fish. "It's right before their mating season now," Jürgensen said. "They're probably just marking their territory."

Wels catfish inhabit warm lakes and some rivers in central, southern and eastern Europe and western Asia. They are the second largest freshwater fish in the region behind the beluga sturgeon.

According to the Encyclopedia Britannica, the species can reach a length of 4.5 meters (15 feet) and a weight of 300 kilograms (660 pounds). The largest catfish recorded in Germany was caught in 2000 in Kiebingen, near Rottenburg. It was 2.39 meters (7.84 feet) long and weighed 89 kilograms (196 pounds).

Despite swimmers' fears of giant catfish, it might turn out that they aren't so giant after all. Leading catfish expert James Holgate estimates that the Schlachtensee fish was about 1 meter (3.3 feet) in length, judging by the size of the bite mark on Saxe. "That isn't really big by catfish standards at all," says Holgate, who has been fishing for catfish throughout Europe for over 15 years and is the co-author of "Big Catfish in Europe."

And it might turn out they're not that dangerous, either. "I got bit by one inadvertently one time," Holgate told SPIEGEL ONLINE. "You have to understand, though: Their teeth are more like sandpaper than real teeth. It didn't hurt at all."

Holgate also said that, based upon his 20 years as a catfish expert, instances of catfish attacking humans are "extremely rare."

"And if you do get bit," Holgate added, "your biggest danger is infection from the dirty water."