A lot of strange things go on in Germany during the week of Carnival, as the days leading up to the religious festival of Lent on Ash Wednesday are commonly known. Germans eat, drink and make merry at extravagant costume parties dressed as anything from witches to clowns to the devil. Celebrations reach their peak with a series of costumed parades, and a lot more partying, on Rose Monday. But amidst all that revellry, one of the more unusual celebrations takes place annually in the small Bavarian town of Dietfurt, population 6,000. 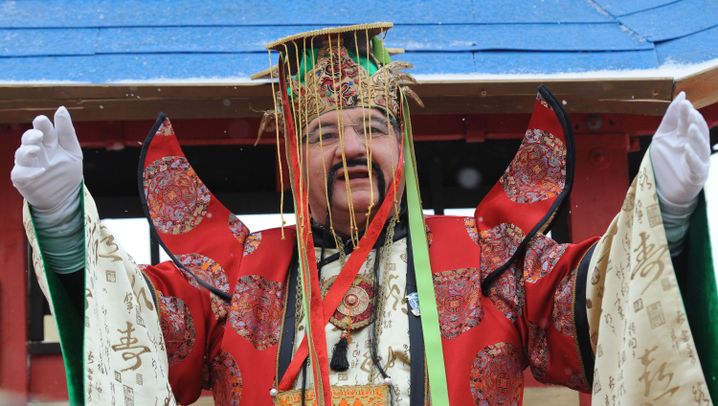 Since 1928, the people of Dietfurt have celebrated the Thursday before Rose Monday by becoming "Bavarian Chinese." During what they call "Chinese Carnival" they dress up in Asian costumes and hand over the rule of their town -- at least metaphorically -- to a "Chinese emperor" chosen from among the townspeople. The town's mayor is relegated to the status of "imperial Mandarin" for the week.

Parading for the Chinese Emperor of Bavaria

Dietfurt has had several emperors since the tradition began. This year, around 10,000 Germans took to the streets to celebrate the current ruler, Emperor Ko-Houang-Di, who has been resuming the position for 10 years now. Often Dietfurt's emperors take their Chinese name from their jobs -- for instance, Emperor Ma-ler-Gie, who reigned from the 1950s through to 1970, was a painter in real life (in German "Maler" means painter). According to the Dietfurt Chinese Carnival Web site, the current emperor has been in power since 2000 when he was discovered in a golden egg on the specially constructed imperial tower in Dietfurt.

To celebrate the new emperor, the townspeople hold a parade in his honor. Each year the townspeople, whom one might assume have little other connection to China besides the odd pair of sports shoes made there, dress up in Chinese costumes, do dragon dances, learn strange German-Chinese hymns they compose for the event and yell faux-Chinese greetings to their emperor.

Anything Goes on Fool's Thursday

The Thursday before Ash Wednesday goes by various different names around Germany. In the Rhineland, it's the day that launches the main annual Carnival festivities -- "Weiberfastnacht," or Old Wive's Day -- but in Dietfurt it is called "Fool's Thursday," and all sorts of nonsense are permissible.

The Dietfurt festivities begin at around two in the morning -- or at 01:61 a.m., as the locals like to say during their day of silliness -- when "town criers" make their way through the city waking the "Bavarian Chinese" up in preparation for the day's activities. The parade itself begins, appropriately, at 01:61 p.m. in the afternoon, about one minute past two.

The origins of the Chinese carnival in Dietfurt, which has drawn tens of thousands of visitors since it began, are not completely clear, although it is thought that when the local church demanded more taxes of the Dietfurters in the 1870s, residents refused to pay. They closed their doors and locked their walled town down so that nobody could collect the money. When helpless officials found themselves in front of the walled city, they likened the Bavarian townspeople to the Chinese who took shelter behind the Great Wall of China and simply waited patiently for the enemy to leave.

These days, though, the town is more than open to all comers -- including real Chinese. In 1997, a high-ranking delegation from China visited the unsual festival in Bavaria and were so impressed by the townfolks' efforts, that the delegation's leader, Deng Xingzhou, called for a closer relationship between Beijing and Dietfurt.