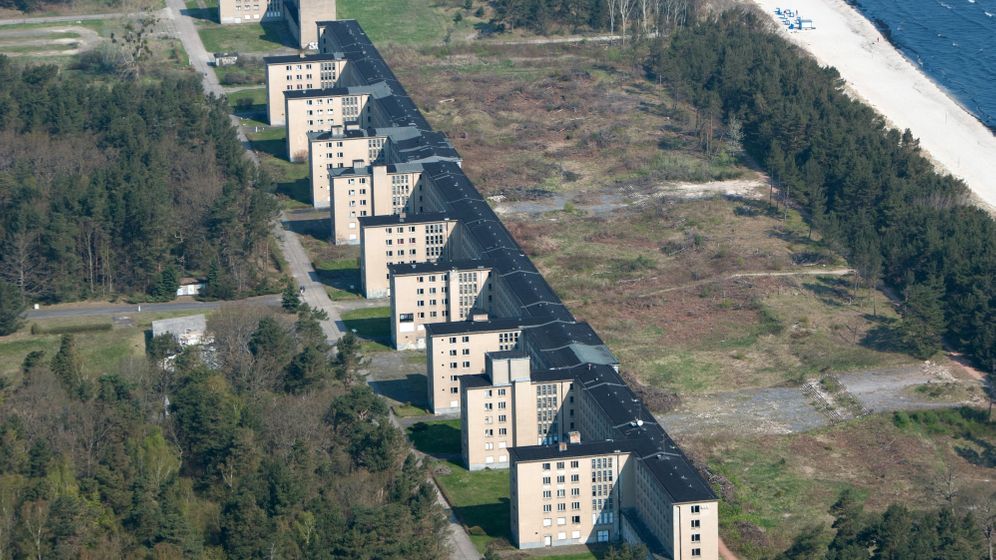 Sun, sand and miles of flaking Nazi concrete. Germany's newest youth hostel stands just meters away from one of the best beaches the Baltic Sea has to offer, but is located in a building with a deeply troubled past.

The 400-bed hostel, which calls itself "the longest youth hostel in the world," was opened on July 1 in a gigantic former Nazi holiday hotel that stretches for 4.5 kilometers (2.8 miles) along the coast of the island of Rügen at the resort of Prora. The concrete behemoth was built to offer budget holidays for German families, part of Adolf Hitler's strategy to create a healthy nation fit for war. The hostel occupies only a small fraction of it.

The venture is controversial, with critics saying an architectural monstrosity with such a dubious history is the last place where people should be spending their holidays. Indeed, bloggers in far-right Internet forums have reportedly been celebrating the opening of the hostel as a continuation of the Nazis' strategy of providing cheap vacations.

The German Youth Hostel Association didn't help matters by publishing a brochure that appeared to highlight the history of the site as an attraction. It mentions that the hostel is located "in the world-famous Prora KdF buildings."

KdF stands for the Nazi organization "Kraft durch Freude" ("Strength Through Joy") which sought to promote Nazi ideals through leisure activities such as mass tourism.

The local authority has pledged to keep neo-Nazis away. "We will do all we can to prevent brown (Nazi) ideology from gaining a foothold here," said Rügen district councillor Kerstin Kassner.

Beach Vacations to Ready the Nation For War

Prora was part of the KdF strategy -- it was designed to accommodate 20,000 people at a time. Hitler was convinced Germany lost World War I because its population lost its nerve. His idea was to create cheap package holidays to wed the nation to Nazism and to shape happy, strong, well-rested new generations capable of winning the next war.

The façade of the 152-meter section housing the hostel has been painted white, contrasting with the flaking, brownish-grey concrete of the rest of the flat-roofed, six-story structure that hugs the coastline in eight blocks measuring half a kilometer each in length. Only a thin screen of trees separates it from the sandy beach. All the rooms in the hostel face the sea.

Sunseekers are flocking to the place, which is booked out for the summer season and is already receiving bookings for summer 2012.

Prora has been a headache for the German government ever since it took control of the complex after unification in 1990. Construction started in 1936 but the Nazis never used it for holidays because World War II started before it was completed.

Prora went on to assume a number of less pleasant functions, accommodating civilians bombed out of their homes in the Allied bombing raids on Hamburg and other northern cities. In 1944 and 1945, it provided shelter to refugees fleeing Germany's eastern territories as the Soviet Red Army swept towards Berlin.

It was taken over by the Soviet and then East German military and was out of bounds to the public until 1990. Today, it houses a museum about the site's history, a ramshackle restaurant and a disco. Most of its 6,500 rooms stand empty. The sea wind whistles through its broken windows.

The place testifies to Hitler's megalomania. A festival hall for 20,000 people was planned but never built. It was to have two piers big enough for ocean liners, swimming pools with wave generators, shops, a school, a power station, hospital and even ultra-modern solarium halls with infrared lamps.

It looks like an endless phalanx of forbidding government ministries rather than a holiday resort. But the design won an award at the 1937 Paris World Exhibition for the idea of a mass tourism and its modern architecture of steel-reinforced concrete, which has withstood the rough sea climate.

Four of the 500-meter blocks were sold to private investors between 2004 and 2006. The portion housing the youth hostel was bought by the local authority and refurbished for €15.1 million.

Investors plan to convert parts of the building into a hotel and apartments. A further block has been put up for sale. The minimum asking price is €500,000.