Over the last several months, turmoil in the international economy has made Frankfurt on the Main, Europe's financial capital, a pretty scary place to live. Still, the city's Martinus Evangelical Church got a special shock on Thursday as a rampaging wild boar burst through a glass porch door and terrorized a group of 10 mothers eating breakfast with their young children. 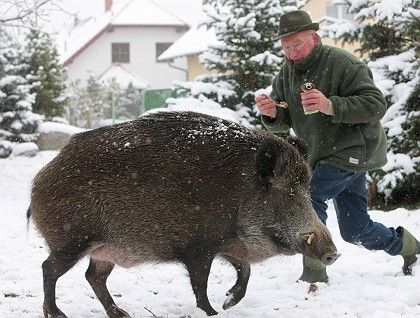 Wild boars can be dangerous and terrifying. Even city-dwellers are threatened.

The mothers, who dine regularly in the church as part of a "mini-club," were seated with their offspring, ages one to three, at small, appropriately-sized children's tables. At about 11 a.m., police reports indicate that a feral beast leapt into the room through a glass door, shattering its pane into hundreds of pieces. The boar then dashed frantically around the room before exiting through the very same portal from which it had made its violent entrance.

The mothers and children took cover by getting up on top of the tables and chairs, and although no one was hurt, all were visibly rattled when the police arrived later. According to the police report, the parish is providing "psychological support" for all those who need it.

Victims of the attack told police that the boar, suspected to be female, sustained injuries from crashing through the glass. After briefly running around the room, the wild sow ran back toward the cemetery, suggesting that she may have been just as frightened by the encounter as were the shaken members of the breakfast club.

If so, the boar was right to be concerned. Just minutes after the church-rampage, the driver of a police vehicle phoned headquarters to report that he had run over a wild sow on the near-by Schwanheimer bridge. The sow did not survive the collision, and the police believe it to be likely that the Jane Doe who perished in this second incident is in fact the self-same boar.

2008 has been a banner year for wild boar incidents in Germany, with sudden attacks, often in gangs, becoming an increasingly familiar sight.

After groups of angry boars assaulted car thieves and layed waste to a home-improvement store earlier this year, it is difficult to avoid the conclusion that in the years to come, even the country's most urban districts will no longer safe from the boars' wild onslaught.