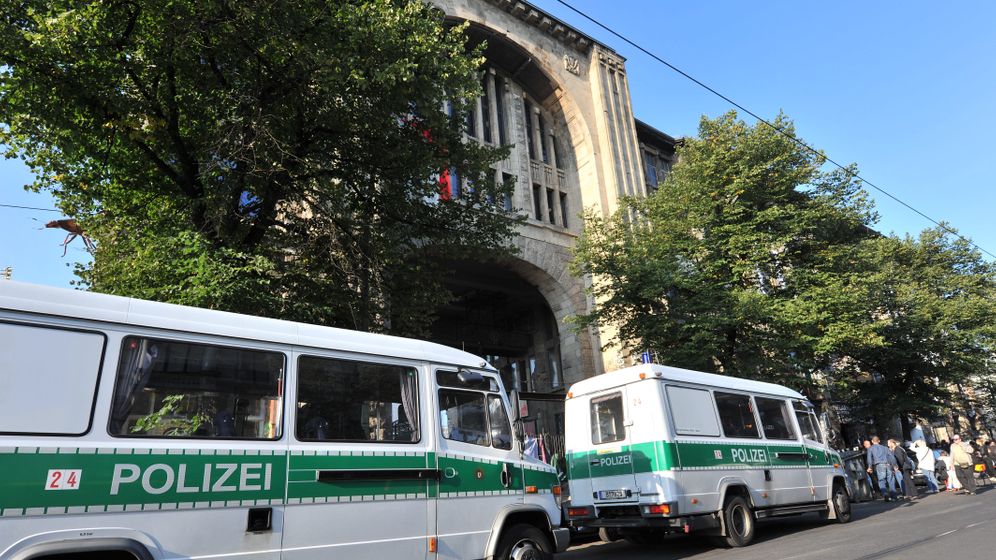 Photo Gallery: End of an Era as Berlin Art Center Tacheles is Cleared

Tacheles, the grungy Berlin art center housed in a derelict former department store that became a trashy symbol of the capital's post-unification freedom, was cleared on Tuesday after years of legal wrangling between the owners and the occupants.

"This is art theft under police protection," said artist Martin Reiter. As the building was cleared, artists stood on the sidewalk with their belongings. One man played the blues on the saxophone. Two men clad in black hummed a funeral march.

"We are bowing to force," said Linda Cerna, spokeswoman for the 40 to 60 artists who had exhibited their work in the rooms and corridors of the five-story concrete building, located in the heart of eastern Berlin's trendy Mitte district.

A bailiff, accompanied by police and lawyers for the owner, HSH Nordbank, and the artists entered Tacheles at 8 a.m. to inspect the rooms and seal them off. Some 80 people stood outside demonstrating against the closure. Police were on standby but there was no trouble.

For years, Tacheles was a firm fixture on tourist itineraries. It exuded a nostalgic atmosphere of Berlin as it was immediately after the fall of the Wall in November 1989. Visitors came here to get a taste of the city in those carefree, anything-goes days.

'Berlin Has Suffered a Great Loss'

But in the more than 20 years since then, commercial interests have gnawed at Berlin's reputation. The city is rapidly becoming gentrified, properties are being refurbished, rents are going up, and nightclubs are having to close because new well-to-do residents are complaining about the noise.

"Berlin has suffered a great loss today," said one of the artists. She called on Berlin Mayor Klaus Wowereit and the city's culture minister, André Schmitz, to resign. "They alone are responsible for this clearance."

Tacheles is the last remaining part of a department store complex built at the beginning of the 20th century. It was heavily damaged by aerial bombs in World War II and the East Berlin authority had much of it torn down in the 1980s.

After the Berlin Wall fell, artists moved in. Plans to turn it into commercial and residential buildings in the 1990s where shelved for years after the real estate company that bought it ran into financial trouble.

HSH-Nordbank as the main creditor now plans to sell it. The city has said part of the complex will continue to be used for the arts and culture. But the trashy center, a colorful blot on the face of an increasingly commercially oriented and streamlined Berlin, is gone forever.