It is reputed to have some of the best coffee in Berlin. But it's not the fancy beverages that has got everyone talking about "The Barn - Roastery."

Instead, the café, which opened last Saturday on the border of the fashionable Mitte district and the family-heavy Prenzlauer Berg neighborhood, is in the news this week because of its no-stroller policy. At the entrance to the café stands a one-meter (3 feet) high concrete post in the shape of a bowling pin that prevents parents from bringing buggies inside. In case the message wasn't clear enough, a sign on the window shows a pram with a line through it.

The reception in the Berlin media and on social networking sites has been fierce. The Berlin tabloid Berliner Kurier dubbed the establishment "Café Heartless." "I feel really excluded here," one 42-year-old father told the Kurier.

Rival tabloid BZ joined in, writing that parents are "outraged" over the post. The newspaper quotes one young mother as saying she finds it "discriminatory."

The Right to Decide

Berlin politicians have even weighed into the debate. "When families with children are deliberately excluded to this extent, that is going a bit far," Sandra Scheeres, the family minister for the city-state of Berlin, told the BZ.

Marianne Burkert-Eulitz, a family policy expert with the Berlin Green Party, said that the café was taking a stance against families. "That is socially incorrect," she told the newspaper.

But it seems that the owner hasn't broken any law. An official from the local city authority, Torsten Kühne, told the BZ that the obstacle was legal, explaining that the owner "has the right to decide who he lets into his establishment. Morally speaking, though, I find the barrier dubious."

The owner Ralf Rüller claims that the ban on strollers is inspired by safety concerns. "The reason why we don't allow for prams is a high risk of fire or smoke in our manufacturing space," writes The Barn on its Facebook page, where it describes its new café "as an industrial space and a brew bar for coffee connoisseurs." The café has a coffee roasting machine that can apparently reach a temperature of 220 degrees Celsius (430 degrees Fahrenheit), posing a fire hazard. "A high volume of prams would make it extremely difficult to handle evacuation in case of fire," the café writes. "So we have decided to have none."

The stroller ban is the latest in a series of perceived anti-children incidents in the Prenzlauer Berg neighborhood which has the reputation of being a hotbed of gentrification and upwardly mobile young families. In recent years, buggies have been targeted in arson attacks or thefts. Another cafe made headlines in 2010 for introducing a child-free zone.

The Barn takes pains to point out that they "do like children" but adds: "We would ask parents to look after them while they are with us."

Earlier this week, the café was attacked online over the perception that wheelchair users were also banned. That appears to have been a misconception, however. Rüller told the Berliner Kurier that the concrete post would "naturally be removed" for wheelchair users.

The fuss over the house rules seems to be exasperating the café. "We really want to concentrate on our coffee brewing mostly and not arguing why this or that is not possible," the Barn writes on Facebook. "We understand that this is not for everybody, but some will appreciate it a lot. This is by no means an intention of discrimination against parents nor people with disabilities."

Rüller closed the café on Wednesday, apparently out of fears that he might face mass protests by angry parents.

But it's not just parents of young children who might feel excluded. In a manifesto published on Facebook, the café outlines its über-purist coffee-brewing philosophy. There is no music played in the cafe, and laptops are only tolerated at one "media table." For reasons that are not immediately clear, the wait staff only speak English to customers.

To reflect the sense of a French Revolution-style new beginning, the Barn is even renaming beverages, rejecting mainstream terms such as "latte macchiato" or "cappuccino." Instead, those wanting an espresso-based drink can choose between a "3 ounce," "6 ounce" or "10 ounce" cup. The hand-brewed filter coffees -- the new drink of choice for coffee purists -- are only served black. "For us it would be like adding milk to champagne if we would serve it any other way," the café writes.

Some people feel the Barn is going a bit far. "The Seinfeld Soup Nazi now runs a coffee shop in Berlin," wrote one observer in a withering Twitter message, referring to a restaurateur in the sitcom "Seinfeld" who insists his patrons order according to a strict procedure.

Rüller, who claims that he is highly sensitive to discrimination because he himself is gay, is sticking to his guns despite the criticism. "It's clear to me what I have unleashed with my rules," he told the Berliner Kurier. "But that's just how it is in my establishment."

Indeed, some Facebook commentators appear to appreciate the firm line. "Thank you for taking coffee seriously and educating people to drink better coffee," writes one fan. "It's so great to see this kind of quality starting in Europe -- God knows they needed this," writes another.

But for some coffee drinkers, it's not the ban on the buggies or laptops that will drive them away, but the café's firm stance against those who like their cup of joe sweet. "We do believe that our coffee tastes better without sugar," the Barn writes in its manifesto. "And so we are not serving sugar here." 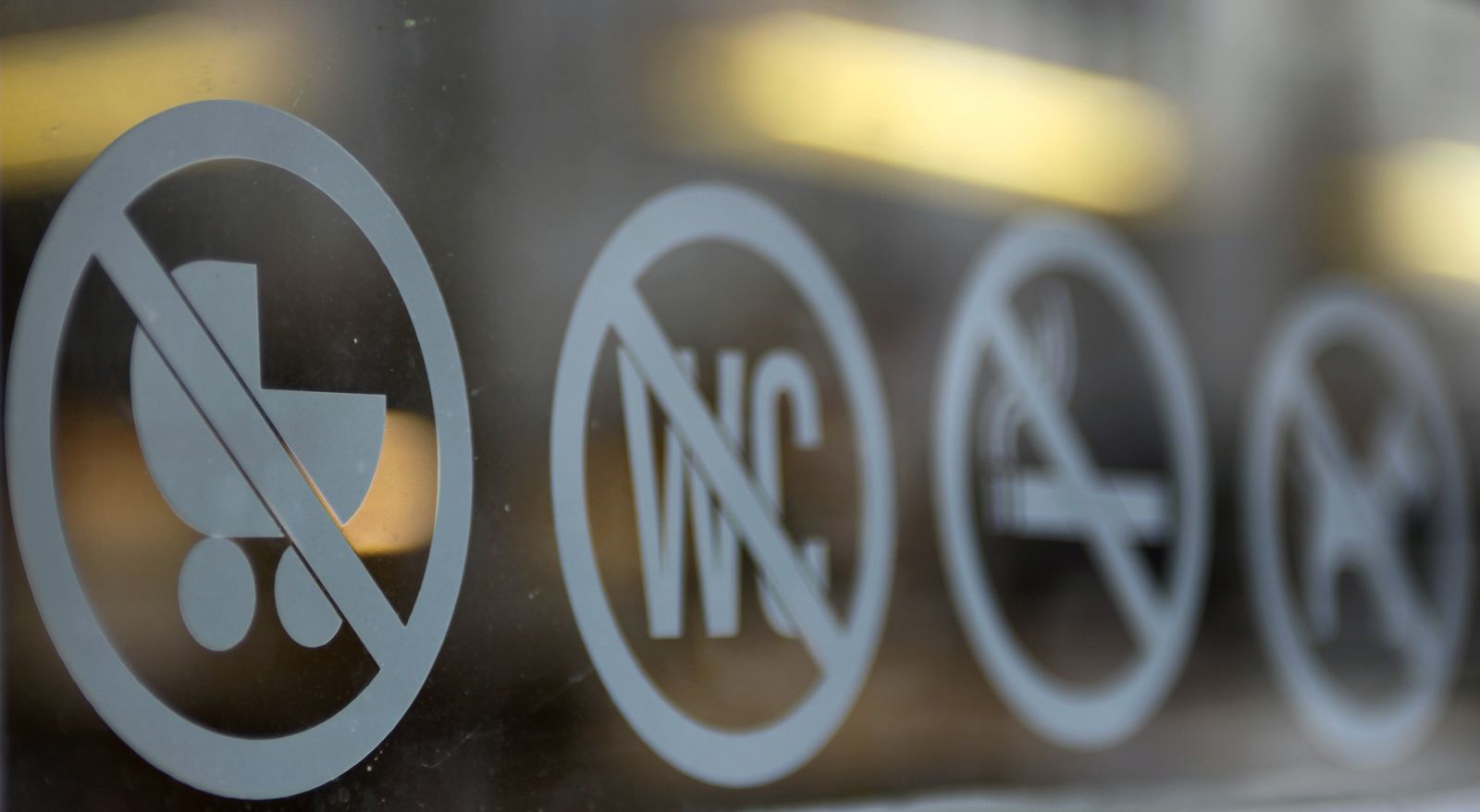 In case the message wasn't clear enough, a sign on the window shows a pram with a line through it.