The young and beautiful in Berlin's nightlife scene worship him as a glamorous eccentric, but under the bright fluorescent lights of the cafeteria at the Brecht Theater on Berlin's Schiffbauerdamm street, singer and musician Rufus Wainwright is looking pale and even a little frantic.

"It's a real struggle that we've gotten ourselves into," he says. "Look at me. Don't I look awful? As if tomorrow were my last day alive?" 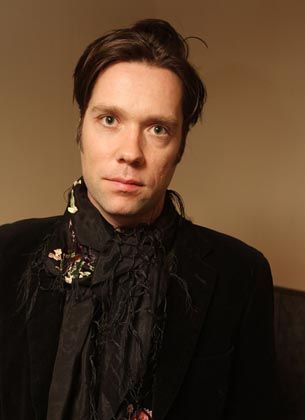 Singer-songwriter Rufus Wainwright is currently preparing the music for a play with director Bob Wilson in Berlin.

A few years ago, Elton John called Wainwright the "greatest songwriter on the planet," but he also happens to be very good-looking, or at least sufficiently attractive to survive a few bags under his eyes and a day when his mass of brown hair happens to be less than perfect.

At least the scruples he mentions so demonstratively seem real. "There aren't that many days left before opening night, and all I can say is: Maybe this thing will be great, or maybe it'll be a disaster. But it's certainly an undertaking that's definitely not childish."

Wainwright, popular and notorious for being a brilliantly immature person filled with extravagant emotions, is currently working at the Berlin Ensemble with a legendary avant-garde artist of the world theater. Bob Wilson, 67, has hired Wainwright to supply the music for a joint version of Shakespeare's "Sonette," which premiers on Easter Sunday. Of Shakespeare's 154 sonnets about the pleasures and sorrows of love, decay and betrayal, the two artists will use only two dozen for their spectacle. The theater promises a "dream journey" with sublime images and the "beguiling music of Rufus Wainwright."

Wilson is a stage director and playwright who, for more than 40 years, has arranged people and sets in fantastic puppet shows. Because of his reputation, what he is doing in Berlin today comes as no great surprise to his fans and detractors alike. After a rehearsal for "Sonette," the actors shuffle through the Berlin Ensemble's cafeteria, their faces still painted with Wilson's trademark white makeup, wearing stiff costumes and white fairy gowns.

But Wainwright ignores the commotion in the cafeteria and stares at the tabletop. "It's the first time I've ever made music for the theater," he says. "The most important lesson for me has been that I have to learn to let go." But then he loses his composure a little, after all, and says: "I just can't stand it when I get the feeling that the director couldn't care less about my music!"

Wilson, with his reputation for being a cool diva, has involved many great musicians in his stage productions in the past, including Lou Reed, Philip Glass, David Byrne and German rocker Herbert Grönemeyer. In 1990, he directed an internationally acclaimed stage hit, "The Black Rider," in Hamburg with Tom Waits. "He uses a clear, extremely definitive design vocabulary. My job is to load it with inspiration," composer Wainwright says pluckily. "Of course, I know that Bob is an extremely sensitive person. But so am I! Maybe even a little too sensitive."

The courage to take emotional risks is one of Wainwright's strengths. The songs on his five albums combine respectable North American song-writing tradition (his parents are also musicians) with an attractive propensity for art songs and opera. His concerts are amusing, sometimes over-the-top celebrations of sheer allure, in which Wainwright combines his talkativeness and love of clowning around with entertainment. For critics Wainwright, who spends most of his time in New York, is a hero of so-called transgression pop, which toys with gender roles. Other representatives of the genre include furious musical innovators like Antony and the Johnsons and the duo CocoRosie.

Wainwright himself knows no false modesty when it comes to his artistic goals. "I want to be a great composer of operas, like Verdi, Puccini or Richard Wagner," he says. In his younger years, when he was in music school, he neglected to acquire the tools he needed for the job, says Wainwright. "All I thought about was writing songs, and I skipped every class." His drug use also wasn't exactly conducive to learning.

But Wainwright recently completed his first opera. Titled "Prima Donna," its world premier was originally scheduled to be produced at New York's Metropolitan Opera, but after an absurd dispute over the language of the piece (Wainwright wrote the libretto in French, but the Met wanted it in English), it will now premier in Manchester in July, where is will be staged by a young director -- in French. "It's the story of a singer, a diva, who resembles Callas a little," says Wainwright, "but it isn't really Callas's story."

First Wainwright will have to make it through the "Sonette" rehearsals. "We'll see whether our two approaches to art consume each other or blossom into a beautiful flower," he says, alluding to the duel with Wilson.

The fights on the stage are not the only things bothering Wainwright. "The Berlin winter is even rougher than its reputation," he says, sighing, brandishing a few elegant, theatrical gestures of outrage. "When it gets as frigid as it was a few weeks ago, you have to worry about freezing to death. But when it's gray and wet, the way it's been in the last few days, you don't have to worry about that anymore -- you just want to kill yourself."