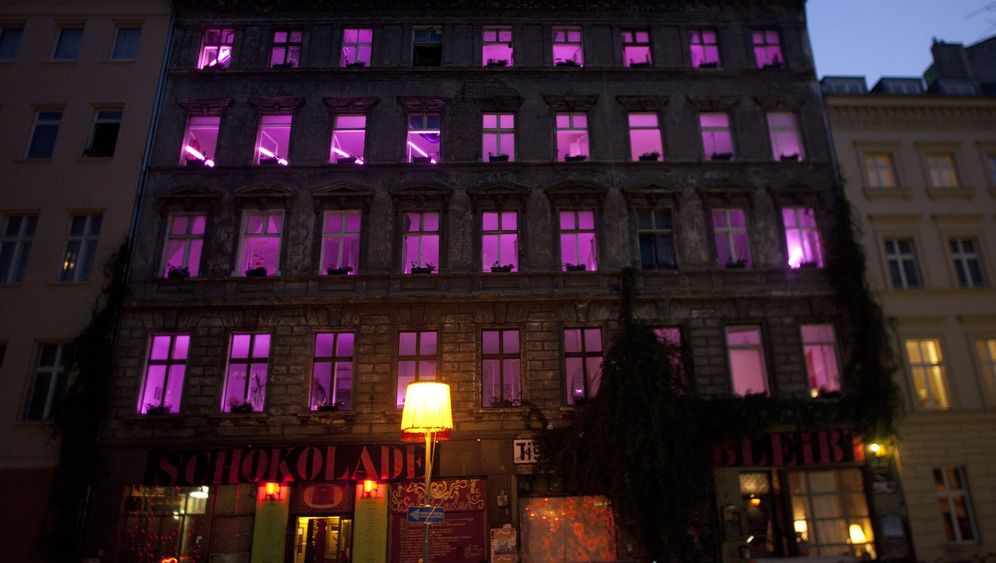 Berlin's famous alternative scene is alive and kicking in the club Schokoladen, or "chocolate". Unknown bands perform here and it's a place where you'll run into punks and songwriters. The large venue in Berlin's central Mitte district also has a theater and artists' studios. Its visitors enjoy the entertainment and like to party, so much in fact that they occasionally urinate in the entrance to the apartment block next door where Sven Kraus lives.

The 32-year-old likes the club in general but is fed up with the broken glass and pools of urine he finds on his doorstep in the mornings. At least the noise has died down a bit. Since last summer, city officials have forced any concerts held at Schokoladen to end by 10 p.m. -- a pretty tough rule for a trendy club.

Schokoladen is only of many Berlin clubs that have to contend with increasingly strict noise regulations. Many Berliners are worried that the city's reputation as one of Europe's great party towns will suffer, and even that its best night spots may die out. Berliners are calling the phenomenon "Clubsterben," a play on the German word for death.

The scene has two problems: residents and investors.

Neighbors usually complain about the noise made by people heading in and out of the clubs, and they often call the police. "It's always the same ones," says Anja Gerlich, spokeswoman for Schokoladen. "A single resident can force a club to close."

But the second problem -- gentrification -- is proving an even greater threat to Schokoladen. Its lease was cancelled years ago and the new investor wants to build posh new apartments rather than have a large club in the building. The dispute has been stewing since 2005 and Schokoladen was to have been forcibly shut down in February of this year. After pleas and protests, it was given a few more weeks until the end of March. A foundation has offered to buy the building and keep Schokoladen open, but Gerlich and her colleagues are worried that the plan will fail.

But local politicians like Christian Goiny may yet come to the rescue. The 46-year-old politician from the conservative Christian Democratic Union party of Chancellor Angela Merkel doesn't look like a typical Schokoladen visitor. He sports a dark gray suit, a perfectly arranged tie and freshly shined shoes. But the trained lawyer, who holds a seat in Berlin's city parliament, is determined to keep the clubs alive.

He researched the city-state of Berlin's club scene and discovered that no fewer than 15 clubs are under acute threat of closure. That's unacceptable, says Goiny. "It's normal for clubs to move location from time to time," he says. "But it's a new trend that virtually whole city districts are being cleared."

The eastern district of Prenzlauer Berg, which has become gentrified due to an influx of prosperous yuppies and massive housing refurbishment over the last 20 years, is under threat of becoming a huge dormitory, he added.

Last year, the legendary Knaack club closed after almost 60 years, after neighbors living in a newly built apartment building complained about the noise. It was followed a few weeks ago by the last party at the hip Icon club, whose organizers were forced to shutter the establishment after the owners of the disused brewery that housed it refused to renew the lease because of neighbors' noise complaints. Finally, at the end of January, the Klub der Republik, known for its nostalgic East German theme, also shut down because the property owner's plan to build new apartments.

'Music Board' Seen as Way to 'Keep Berlin Trendy'

Now Berlin's city government under mayor Klaus Wowereit of the center-left Social Democrats plans to set up a "Music Board" to protect Berlin's music scene. It wants to set aside €1 million ($1.33 million), part of which would go towards helping clubs find new locations. Goiny of the CDU, which is the junior coalition partner in the city administration, envisages providing money for clubs to stage concerts, as well as for promoting new musical talent and other projects. The concept hasn't been worked out in detail yet.

People like Lutz Leichsenring have high hopes for the "Music Board." The 33-year-old has taken part in a number of initiatives to save Berlin's clubland and is urging politicians to get more involved. "Until now, local authorities and investors have been in cahoots with each other while the club owners weren't taken seriously as entrepreneurs," he says.

The money provided by the "Music Board" could help pay for lawyers to represent the interests of clubs in negotiations with authorities, investors and residents, says Leichsenring. And clubs should be taken into account in future city development planning, he adds. "The scene mustn't be pushed out into peripheral districts. We want to keep Berlin trendy."

The "Music Board" is already being celebrated as the rescue fund for Berlin's clubs. But Richard Meng, spokesman for the Berlin city government which will be in charge of the fund, has a problem with that. Meng complains that the debate is focusing too heavily on clubs and not enough on the general promotion of music. And he doesn't think Berlin's clubs are in trouble. "I doubt that clubs are really dying out," says Meng. "Berlin's club scene still has a lot of pulling power."

He says discos are only part of the "Music Board" concept. "The clubs are a lively part of Berlin -- but it can be that individual ones perhaps aren't in the right location, and that changes have to be made as a result." He said it was normal in a big city for the scene to move from one place to another.

Whatever the "Music Board" ends up being used for, it will come too late for the clubs that are now under acute threat of closure, because the government isn't expected to submit a detailed plan for the fund before 2013.

Anja Gerlich of Schokoladen hopes the Berlin clubs will get more support then -- and that her own club will still exist.