The skinny man in the black T-shirt and jeans faces the crowd, microphone in hand. There are around 2,000 people crowded around a small amphitheatre built into the hillside in Berlin's Mauerpark, a recreational area located on the former path of the Berlin Wall's death strip. They are all here on this sunny afternoon because of a regular Sunday event that is rapidly becoming an entertainment phenomenon in the German capital. No tickets are sold, barely any advertising is posted and no real money is made. Nonetheless, the Sunday afternoon outdoor karaoke sessions, held just on the edge of one of the city's biggest flea markets in the trendy Prenzlauer Berg neighborhood, draws a capacity crowd. People are crouching on the hillside and flanking the small cobbled stage area where the karaoke machine has been set up. They jostle for a seat in the dust or on the concrete. And now Andre, a skinny and unprepossessing young man, is ready to perform.

To the shock, awe and ultimately delight of the crowd Andre will be doing a cover of "Hips Don't Lie." The music begins and somewhat unexpectedly, Andre even sounds a bit like Shakira. Even more unexpectedly, he dances like her. He high kicks, shakes, shimmies and waves his arms. His hips do not lie. And then, unashamedly, in the bright sunshine and obviously not at all intoxicated -- he may be high on life, but that's all -- Andre gets down on all fours and wiggles his butt. Just like Shakira. 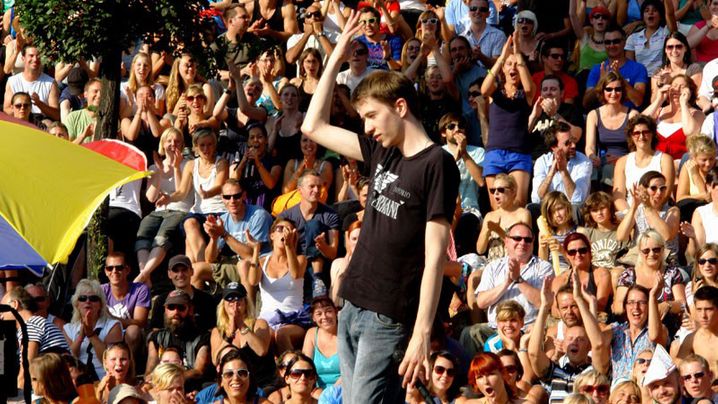 The crowd goes, literally, wild. They weren't expecting this, but they love it. And therein lies the attraction of this strange new Sunday afternoon pastime. It's just a good old-fashioned good time.

All sorts of people get up and sing. An older guy in a faded yellow T-shirt sings the blues, gravely voiced, tattooed and with gray hair. An African-American girl does a pitch-perfect version of soul singer Alicia Keys' song, "No One," while her friends cheer her on from the sidelines. A guy with dyed-black hair, in ripped black tights and an oversized T-shirt enthusiastically welcomes everyone to the jungle with Guns N' Roses. And Soraya, well, she can't really sing in tune and she doesn't know the lyrics -- but she sure as hell knows how to have a good time. An attractive woman in a printed summer dress, she kicks off her shoes and dances madly around the arena to, rather appropriately, the Pointer Sister's song, "I'm So Excited." And the audience is unstintingly generous, clapping and cheering everyone. The more the karaoke singers seem to go crazy, the more the crowd goes wild. Their motto: It doesn't matter whether you look a bit odd, as long as you're having a good time.

No Drunks, No Karaoke Athletes, No Song Book Huddles

Interestingly, this is also what the man behind this weekly, inner-city phenomenon likes about it. "It's just that it's a little different from other manifestations of karaoke," says Joe Hatchiban, a 35-year-old cycle courier originally from Dublin, Ireland, who has been living in Berlin for the past 6 years. "You know, there isn't that person, drunk out of their minds, who sings 'My Way' until 6 a.m. Or the competitive karaoke singer who just wants to nail their song. Or that bunch of people sitting at the back who just spend the whole time choosing their songs. It's more of a day out."

Hatchiban first had the idea to establish mobile karaoke after expanding his work opportunities with a specialist Larry vs. Harry courier bike that can also take cargo. He also describes himself as something of a "karaoke hobbyist" and in the past, he recounts, he or bike messenger friends have shown up at a party somewhere with a laptop and engaged in a bit of impromptu, outdoor karaoke. So when Hatchiban purchased his cargo bike for around €2,000, he decided to tow what he now describes as a "pretty primitive" version of his current sound system, powered by car battery, around the corner -- Hatchiban lives near the park where the flea market is held each Sunday -- and give some outdoor karaoke a try. That was back in February.

And at first, participants consisted mainly of Hatchiban himself and his friends. But as the weather improved, so did the crowds. And now, Hatchiban's karaoke -- his set up now consists of a much more expensive and powerful speaker system that he was able to get at a reduced price from a Berlin-based company, Klara Geist -- is used by between 60 and 70 would-be rock and pop stars every Sunday afternoon, strutting their amateur stuff to a crowd of thousands.

Britney Is On Compulsory Sabbatical

"There is no real demographic," Hatchiban says of the singers. "We've had everyone from 11-year-old kids to grannies. Even one or two Berlin anarchists," he laughs. Nor is it easy to classify the kinds of songs people choose. Hatchiban has karaoke CDs that he bought online, which are then played on his laptop -- the lyrics are visible on the screen. Most of the singers don't even seem to need them though. Usually, Hatchiban says, people just come up and request a song they want to sing; he doesn't have a song book filled with choices.

"We did have a bit of a problem with a Britney Spears song," Hatchiban admits when asked what the most popular tune is. The love of Britney "cut right across all groups," he notes. "Especially that one song, 'Baby One More Time'. And 'Wonderwall' by Oasis. So those songs are on sabbatical right now," Hatchiban adds, noting that Britney more than once a day was one time too many.

Once the singer has chosen a song, their name is placed on a list and as the afternoon proceeds, Hatchiban calls them to the stage. While Hatchiban mans the microphone, his brother and his girlfriend help him out, lining up songs and taking singer's names.

"I still get the same feeling every time anyone comes up to sing," Hatchiban says. "I'm always curious to see what will happen next." And there have been some memorable moments. The weekend after pop star Michael Jackson died, Hatchiban says his karaoke crowd paid its own tribute. "There were some children who had been dancing to Michael Jackson, then another guy was singing. Then someone else started dancing too and people from the audience just started getting up spontaneously and joining in. And everyone was screaming," he recalls fondly. "And last week we had a guy who did Bonnie Tyler's 'Total eclipse of the Heart'. He was so funny, he got a standing ovation."

Fortunately, despite the unofficial nature of the event, Hatchiban has never had a problem with crowd control. "Very rarely have we had anything approaching serious problems," Hatchiban says. "It's just things like someone wanting to sing again when there are already 40 people on the waiting list, stuff like that." The only other problem currently blighting the Sunday afternoon karaoke's horizon is the possibility that the permit that Hatchiban already has from local authorities doesn't allow him to put on a musical event in this particular park -- he is currently waiting to hear back from the local authorities but he is hoping their answer will be positive. If it's not, he will think about moving the event elsewhere.

'I Like The Idea Of Putting On Shows In Strange Places'

As it is, whatever happens next, anyone who still wants to sing along with the flea market crowd had better hurry along and sign up. Hatchiban is uncertain as to whether he will keep the mobile karaoke going as the German winter approaches. "I don't think I will be able to coax a thousand people out in the driving rain for six hours in November," he quips.

The enterprising Irishman has been looking into other ways he can keep the karaoke going over winter. He is considering hiring the set-up out to private functions or festivals. But he isn't that keen on doing anything that's been done before. "I like the idea of putting on shows in strange places," Hatchiban suggests. He is also thinking about trying to expand the idea outside of Germany. And as to that million dollar question -- is he actually making any money? -- Hatchiban just laughs. "Things are just about balancing out," says the genial master of ceremonies, who occasionally leaves his post next to the speakers to clamber into the crowd and pass a donation box around. "And sometimes I do wonder what I am getting out of it."

But he does have an answer to that: "A good time," Hatchiban concludes. "I just like the atmosphere that seems to prevail down there on Sundays. It still gets to me every weekend. It's a very good atmosphere, it's laid back and it's really happy and I love that."